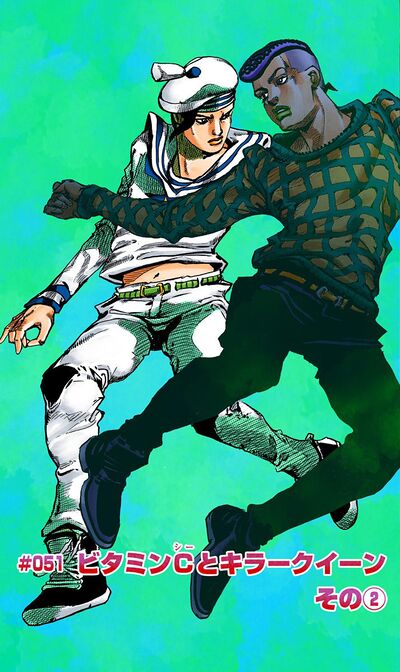 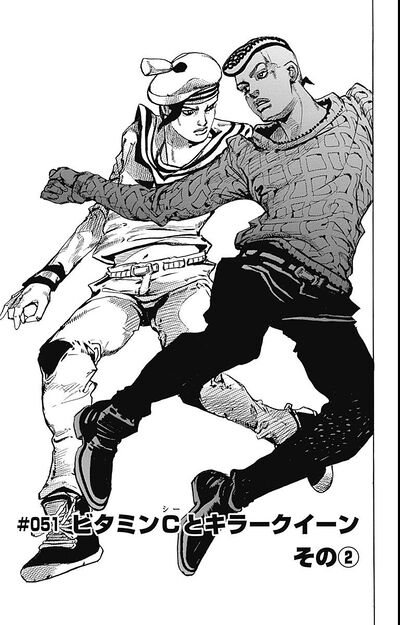 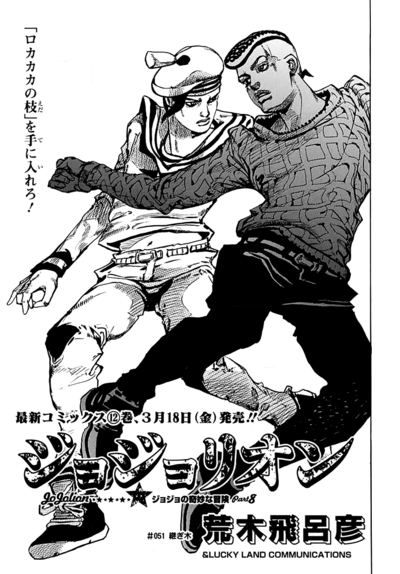 Aisho Dainenjiyama is shopping in a local pharmacy when another client, Josefumi Kujo, is being very enthusiastic about an eye medicine called "Eye Eye Syaa", openly praising its potency and rarity. Josefumi takes all the medicine boxes save one. When another client, Yoshikage Kira, asks if there are any Eye Eye Syaa, the pharmacist goes check the section, but Aisho quickly takes the last box for himself. Aisho is on his way to another sell when he tries to use the Eye Eye Syaa on himself. At that moment, Killer Queen bursts a motorcycle's front wheel and causes an accident, which catches Aisho's attention. Immediately after this, Josefumi stealthily opens the case that Aisho uses to transport the Locacaca and steals some branches, replacing them with branches from another tree. Aisho doesn't notice the theft as his sight is partially blocked by Soft & Wet's bubbles. Josefumi and Kira then depart, having successfully stolen the Locacaca branches.

In the present, Damo comments that the Wall Eyes have changed the landscape greatly, and wonders what could have happened to the whole family, which upsets Norisuke. Damo then asks if Norisuke knows anything about the Locacaca, to which he refutes. Following this, Damo asks if he's killed Yotsuyu Yagiyama. Norisuke doesn't answer fast enough and Damo cuts off his left arm with a 1000 yen bill. Norisuke then admits to having killed Yotsuyu, but Damo asks who else was with him.

Another flashback details how Holy is slowly losing her memory of her son and is disturbed at the thought, which upsets both Kira and Josefumi.

Back in August 19, 2011, Josefumi and Kira return to the harbor after going to sea to talk without being listened about the Locacaca. Josefumi mentions that the fruits are almost ripe and Kira recommends not to approach them until the harvest. Josefumi sees Karera Sakunami in the harbor and the two briefly talk about her. Josefumi ties the mooring line on a bollard and later notices that it has slipped away. Having seen a seagull slip, Kira realizes that their boat is abnormally slippery and sees Tamaki Damo and Yotsuyu Yagiyama in the cabin. Damo reveals that they've learned of the theft when the Locacaca wilted after the earthquake and spent four months looking for the culprits, finally discovering Kira. Kira attempts to attack with Killer Queen, but Vitamin C softens him, Josefumi and the Stand, including its Sheer Heart Attack. Kira and Josefumi are now powerless as Damo begins his interrogation.