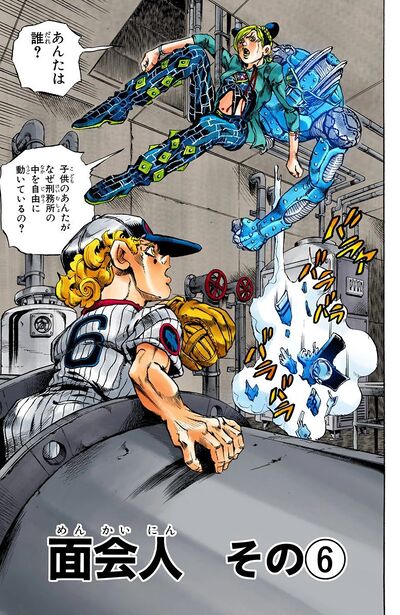 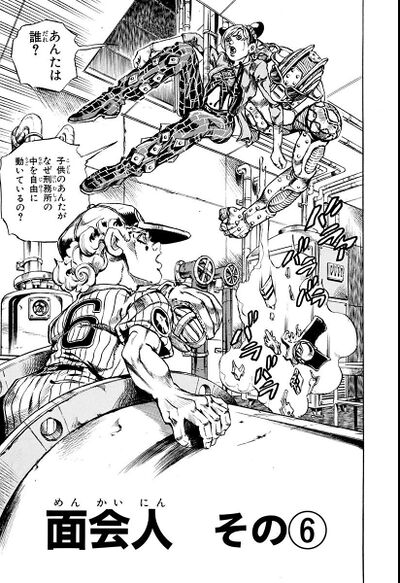 After destroying Manhattan Transfer, Jolyne asks Emporio who he is and about the bone he gave her, but he just tells her to continue to hold onto it. Jotaro enters the room; Jolyne tells him that she defeated Manhattan Transfer. When she looks into a puddle, she sees the reflection of Johngalli A.. She warns Jotaro that he's hiding in the room, but he dismisses her, stating that it's impossible for Johngalli to have arrived at their location within such a short period of time.

Jolyne exclaims that the sniper is directly above him. Jotaro decides to believe her and uses Star Platinum to blow up the gas pipes above him. A burnt Johngalli A. falls from the ceiling. As Jotaro ponders how Johngalli A. could get there so quickly, Jolyne looks for Emporio, who has suddenly vanished. Jotaro questions who Emporio is, saying Jolyne entered the room by herself. As Jolyne tries to explain the situation, she notices Jotaro's shoulder wound has mysteriously disappeared.

Jolyne notices that her own wound is gone, too, and that Johngalli A.'s body is actually the visiting room guard's corpse. In fact, Jotaro doesn't even know who Johngalli A. is. Jolyne looks around to see white goop secrete from the walls and surfaces of the room. She thinks back to the mysteriously lit cigarette, and realizes that she had been hallucinating the whole time. She wakes up in the visiting room, where everything is covered in white goop. Blood drips from her left hand, where she tightly grips the bone Emporio had given her.