Kiss of Love and Revenge, Part 6 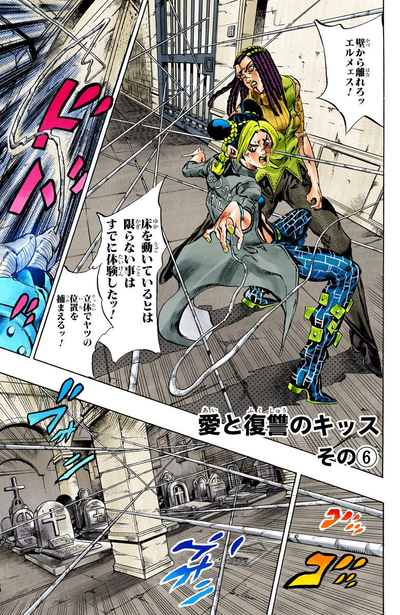 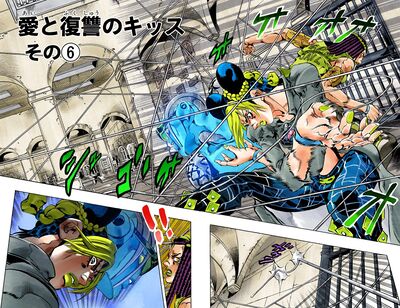 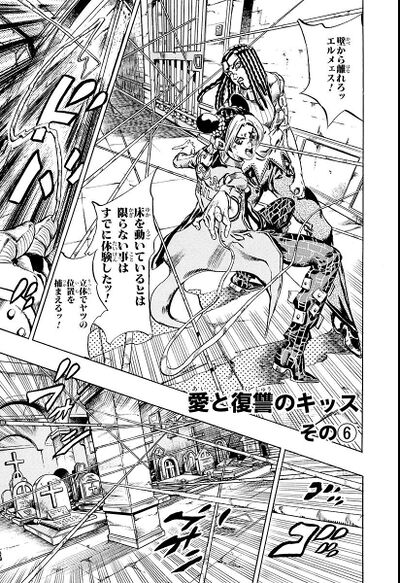 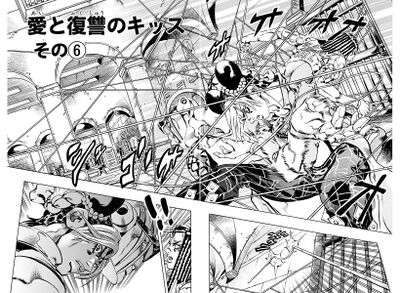 Ai to Fukushū no Kissu Sono 6

Kiss of Love and Revenge, Part 6 (愛と復讐のキッス その⑥, Ai to Fukushū no Kissu Sono 6), originally Ermes's Resolve (エルメェスの覚悟, Erumesu no Kakugo) in the WSJ release, is the fifty-sixth chapter of Stone Ocean and the six hundred fiftieth chapter of the JoJo's Bizarre Adventure manga.

Fearing that the invisible zombie, Maxx, could be crawling on the walls, Jolyne creates a string barrier all around her and Ermes to locate him; one of the strings bend, giving away his location. Jolyne kicks him, breaking his arm, but his wrist spins around, allowing him to grab her foot. As he pulls her upward by the leg and tries to punch her, Jolyne summons Stone Free, which unweaves into string and wraps around the zombie. She punches him to death, causing the prostitute's corpse to burst.

Ermes notices this, and realizes that the zombie isn't Maxx but the girl he killed. The real Maxx strikes Jolyne, knocking her into a pillar. Ermes tries to convince Jolyne to leave it to her, but Jolyne states that it is too late to fight him alone; she points over to the prison mausoleum, where all the graves are dug up. The invisible zombies of former inmates crawl towards the two, in hopes of feasting on their brains.

Aware of how dire the situation is, Jolyne decides to flee with Ermes, but the latter plans to stay in order to enact her revenge. Ermes is sure that Maxx wants to avenge his own death, and will only try to kill Ermes himself. The string barrier is torn apart as multiple zombies approach Ermes. Jolyne tells her to get away, but Ermes stands her ground.