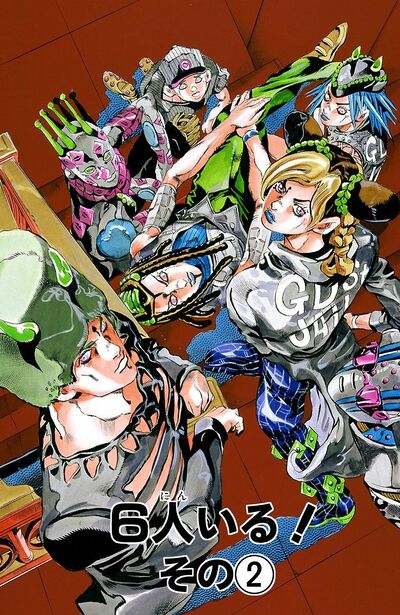 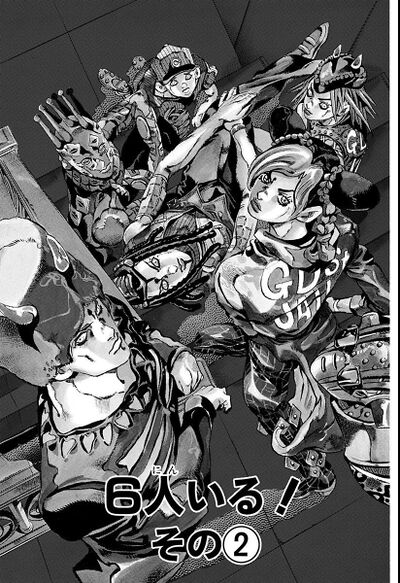 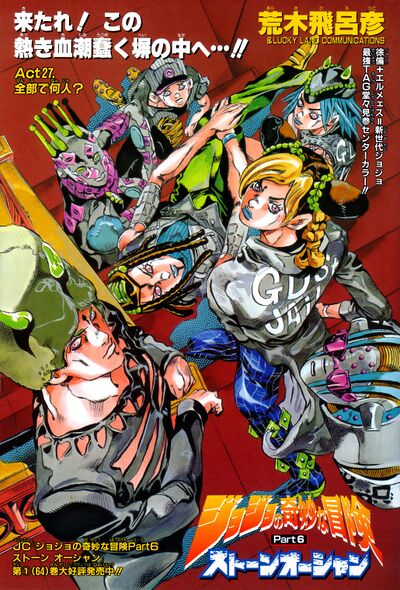 There's Six of Us!, Part 2 (6人いる！ その②, 6-nin Iru! Sono 2), originally How Many of Us Are There? (全部で何人？, Zenbu de Nannin?) in the WSJ release, is the twenty-seventh chapter of Stone Ocean and the six hundred twenty-first chapter of the JoJo's Bizarre Adventure manga.

Jolyne and Ermes decide to go to the barn to search for the tractor where Whitesnake hides his Stand Discs. The prison guard yells at the two, prompting Ermes to mock him. This enrages the guard, who strikes Ermes with his baton; he hits her bracelet, which is rigged to explode if tampered with. Ermes and the guard begin to panic. While doing so, the guard notices a pile of crocodile feces. Ermes begs him to deactivate the bracelet, but the guard pushes her into the the pile.

Jolyne uses Stone Free to place a leaf between Ermes and the feces, protecting her but splashing it on the guard's leg. The bracelet's beeping stops, being only a warning, and the guard drives away angrily. Two other prisoners look into the barn, deciding not to search there for the missing prisoners. Jolyne and Ermes approach and see the tractor they're looking for. The guard tells all the prisoners to search the swamps, and drives into them with his ATV. Jolyne tells Ermes that they have to hurry and find the discs.

Ermes, however, starts shaking in fear. She informs Jolyne that, including them, there are six prisoners in the search team. However, when the warden formed the search team, he had counted five prisoners. She realizes that a member must have joined when they entered the barn, but she didn't look at the other inmates' faces beforehand. Jolyne dismisses this, thinking one of them just miscounted. One of the prisoners, Atroe, also begins wondering where the sixth member came from. Ermes asks her about it, but she shyly states that it's probably just a misunderstanding and doesn't matter.

Another informs the duo that Atroe was with them since the beginning, knowing that she gets bullied a lot and volunteered to get away from the bullies. Suddenly, all the bracelets begin beeping. The inmates look over to see the ATV missing its driver and covered in blood. The inmates assume that the water washed his body away, and that the distance is causing their bracelets to beep. Atroe's bracelet begins beeping louder, and then explodes.