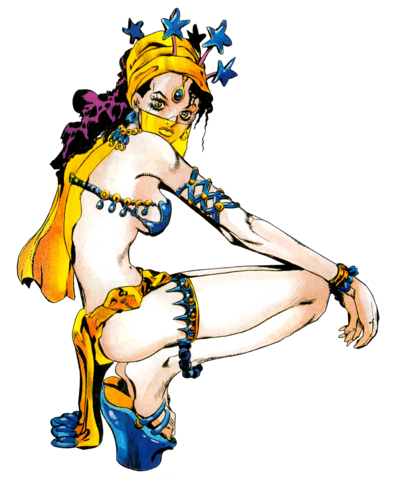 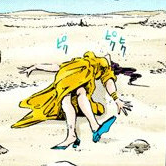 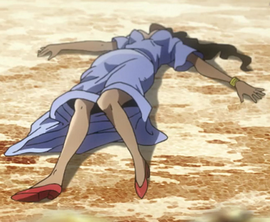 Midler is only briefly seen after her defeat. She appears as a woman of average height and build with a plain dress and long hair. Polnareff notes that her face is unbearable to look at since Jotaro broke all of her Stand's teeth.

Midler received a complete redesign for Heritage for the Future. She is a slim woman of average height wearing an outfit in the minimal style of a belly dancer. Her long hair is held together by a headscarf and five pins with a large star on each sticking out of the headscarf. A gemstone hangs on her forehead in addition to elaborate earrings consisting of several teardrop-shaped gemstones, each ending in one small orb. A veil covers her mouth. She wears a bikini-style bra with star-shaped cups, a fishnet-style band on her right arm, bracelets with frills, a loincloth, and high heels.

Midler is a ruthless mercenary of DIO who does not hesitate to kill the Joestar Group with High Priestess, both sinking their submarine and attempting to kill them directly with her Stand. She tends to laugh when she injures any of them.[3] She is clever with her Stand, nearly killing both Polnareff and Jotaro[4][5]

Despite her brutality, Midler is romantic and flirtatious and flippantly laments that she has to kill Jotaro, who is her kind of guy. She even seems somewhat touched by Jotaro's lie that he likes her. However, she is easily angered by men who lie about being attracted to her.[5]

Midler's Stand is High Priestess, possessing mineral materials in order to form shapes large and complex with which she may attack. Due to its long-range, Midler was capable of using it from ashore, while it attacked the group on the ocean floor. 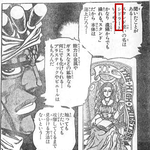 Hirohiko Araki made High Priestess's user a woman, though he didn't make her very feminine so that "it would be more unexpected".[6]

When Capcom produced Heritage for the Future, they wanted to use Midler. However, as her face was never shown, they asked Araki to redesign her into something like a belly-dancer. Since then, as shown in the JOJO A-GO!GO! artbook, this new look is now her standard appearance. Most of the art featured in-game of her is based on Yukako Yamagishi, from character portrait, close-up, and defeat sprites. In addition, some of Midler's lines are borrowed from Mariah; the most obvious example is "Unfortunately, you have to die." (残念だけど死んでもらうわ, Zan'nen dakedo shinde morau wa), used for Midler's appearance in the game. 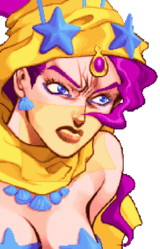 (Notes: Can double jump while in Stand Mode.)