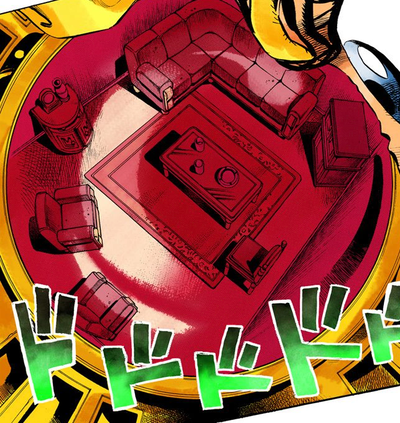 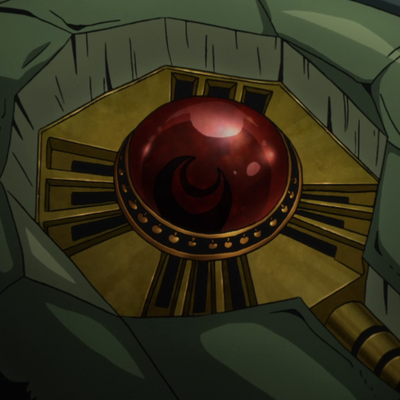 Mr.President (ミスター・プレジデント, Misutā Purejidento) is the Stand of Coco Jumbo featured in the fifth part of the JoJo's Bizarre Adventure series, Vento Aureo.

It serves as a safe room for the protagonists during their mission.

The room created by Mr.President resembles that of a hotel room, containing several pieces of comfortable furniture, a functioning television set and a refrigerator holding drinks. However, it does not include a bathroom.[1]

When one places a special key into the depression located on Coco Jumbo's shell, they can access a room "within the turtle".[2] This activation method appears to have been trained.[3]

By simply approaching the hand on the key, one can "sink" inside Coco Jumbo and find themselves in a plain room inside the animal.[2] Inversely, by only raising the arm, the room's occupant can exit the turtle.[1] Removing the key from the shell's depression forcibly ejects the room's occupants.[4]

The transparent jewel on the key allows people to peek from either side of the room's ceiling, although those outside may see them as very small, while those inside will see people many times taller than them.[5] It may indicate that people actually shrink in order to fit inside Coco Jumbo.

The Stand is unable to provide full protection to its occupants from outside attacks, allowing of effects of Stands like The Grateful Dead[6] or Green Day[7] to seep into the room. The room's integrity and balance, however, isn't affected by moving the turtle around.