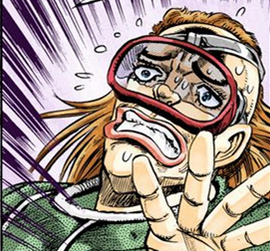 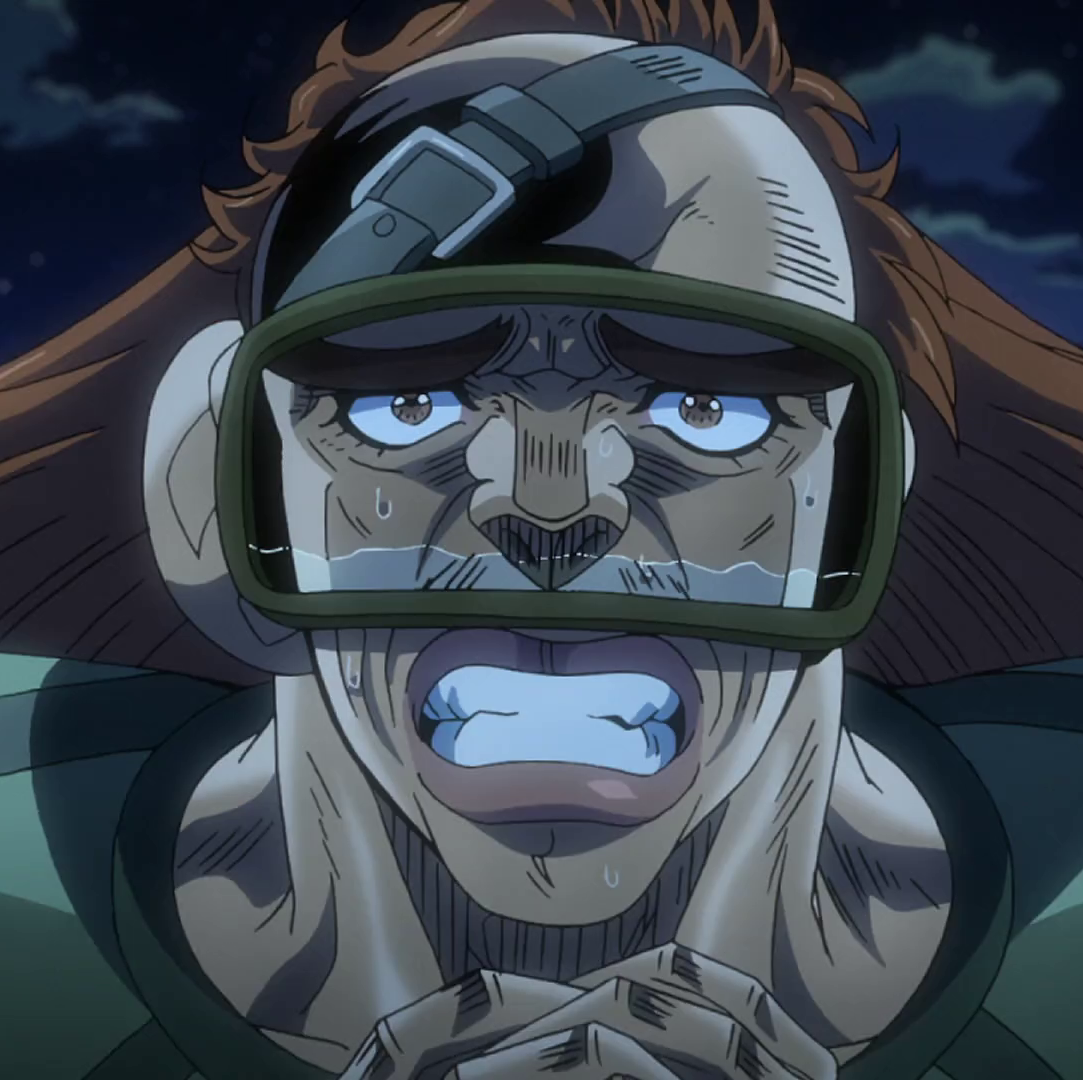 He isolates Polnareff from the Joestar Group on a secluded island in the Red Sea while they are there to retrieve Avdol. Cameo is one of DIO's henchmen and a Stand user who wields the genie Stand, Judgement.

Cameo is a mature man with an athletic build. He is balding yet has long hair in the back. His outfit consists of a usekh, buttoned wristbands, pants, and boots. He also wears a scuba mask with an additional strap over the top of his head while underground to keep dirt out of his eyes.

Cameo is a cruel man who pretends to be a genie using his Stand, Judgement. He initially takes on the guise of a grateful genie and is lenient, allowing Polnareff to confirm if he wants to make a wish Cameo deems boring and even cancel a wish after confirming it.[2]

Cameo reveals his true nature soon enough after Polnareff wishes to revive Sherry and Avdol. In reality, he is manipulative and callous, toying with people's hearts to kill them with their own deepest desires. He enjoys watching his victims suffer from their own wishes[3] and continues to taunt his enemies even when an unexpected disadvantage arises.[4] He also displays a realist perspective, mocking Polnareff for believing someone could come back to life.[5]

Although arrogant, Cameo is a coward. He flees to avoid any harm if Judgement is overpowered. In person, he goes to great lengths to hide himself so only his Stand can get into any conflict. If threatened, he cries for mercy.[4]

Judgement is a hulking humanoid Stand which is very strong and resilient but also manipulates clay to create fake objects and humans. It fakes being a genie and twists its victim's wishes against them. 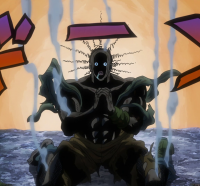 Cameo after being burned by Magician's Red

Cameo is one of the mercenaries hired by DIO to kill Jotaro and his party, waiting on the island where Joseph is visiting Avdol's father. Cameo spends the entire fight underground, inside a hole dug by himself, wearing swimming goggles and a breathing straw. He uses his Stand Judgement to make Polnareff believe it to be a genie and express his three wishes. Polnareff asks it to revive Sherry Polnareff and Muhammad Avdol, and so Cameo creates clones of them who end up attacking Polnareff.[5]

The real Avdol shows up and saves Polnareff from the clones, destroying them and finding Cameo's hideout. Much more easy-going than before his "death", Avdol suggests to Polnareff that they should torture him a little, blocking his breathing straw with his finger for a few seconds and laughing, all the while Cameo suffers from the lack of air. Polnareff begins by dropping dirt, a spider, ants, and a lit match down the straw, but Cameo manages to persevere. Avdol then mentions that "Nature is calling" and to "use the time-tested male bonding technique of taking a piss together". The pair end up urinating into his breathing straw, which prompts a terrified Cameo to reveal himself and beg for forgiveness. Avdol refuses and uses Magician's Red to burn him as his fourth and last wish.[4]

The group encounters Cameo in a very different way portrayed in the manga. In Pakistan, the player finds him on the second floor of a Big Mansion where, after opening a treasure chest, Judgement will appear stating that it will grant the group three wishes. The first wish it grants is to level up the group, which requires fighting three clay dolls of Jotaro. The second wish allows the group to find Hol Horse, though this turns out to be a clay doll as well. The final wish pits Judgement itself against the group with the exchange of DIO's secret as the prize. Once Judgement is defeated, Cameo himself will appear and admit that he does not know anything about DIO, but urges the group to travel to Egypt to find a Stand User who is presumably not working for DIO.

Cameo in Heritage for the Future

Cameo appears as a computer-controlled opponent in the PlayStation port of the game. He is encountered in Story Mode by Polnareff in a special boss battle where the player needs to defeat Judgement, a clone of Avdol and one of Sherry.

The English version changes how Avdol and Polnareff play around with him after the fight. Instead of urinating into his breathing pipe, they drop pebbles into it, causing a similar but less-disturbing torture.