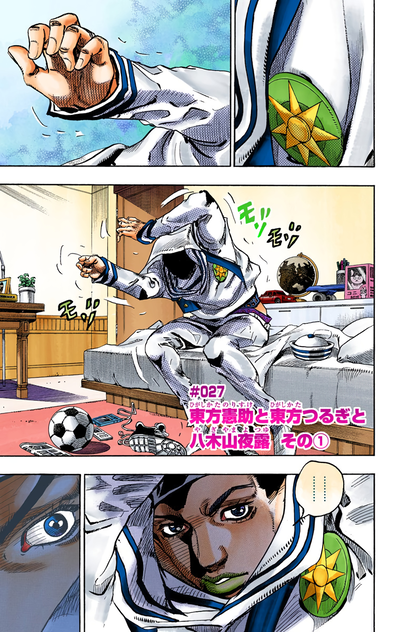 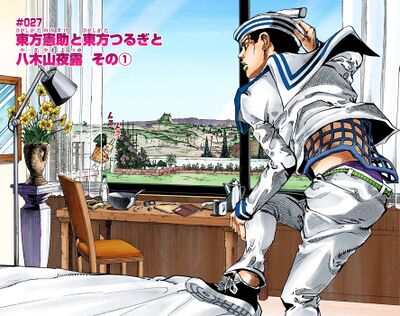 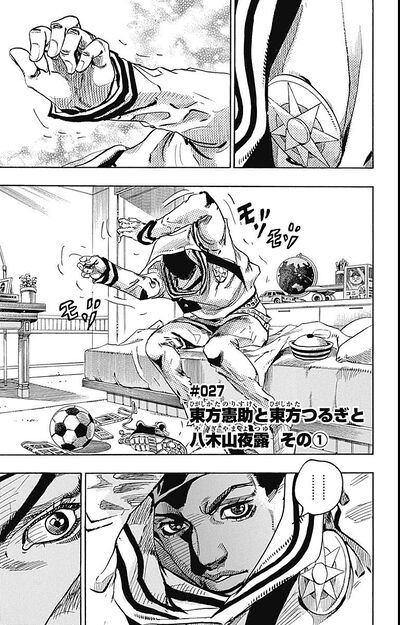 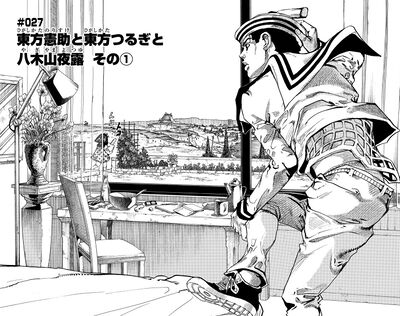 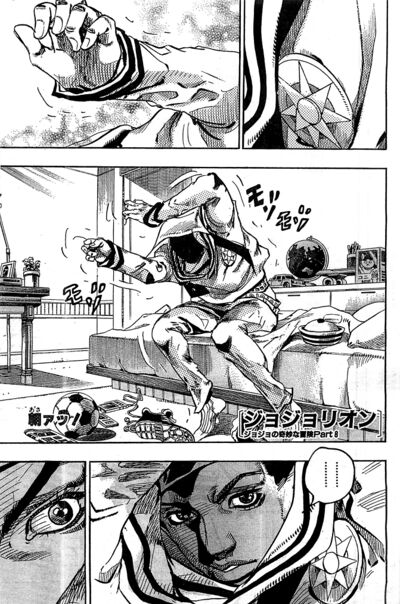 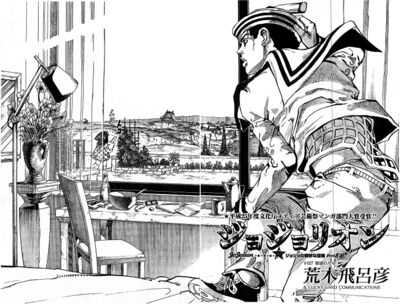 Josuke wakes up after the events surrounding Tsurugi's Stand, and sees him walking across the yard towards a set of stairs holding a bag of groceries. As he goes to inspect Tsurugi's actions, Josuke is stopped by Daiya who tells him that Tsurugi wouldn't go down the stairs as his mother would yell at him. Norisuke asks Josuke how school is going, but Josuke is unable to answer. Joshu, who has a large bump on the back of his head covers for him, claiming Josuke joined the basketball club and fell and hit his head on first base. Josuke argues with Joshu, who said he and Yasuho had sex later that day, ordering him to call her. Norisuke points out the bump on Joshu's head, and the inconsistencies in his story, causing Joshu to realize he does not know the true details of the day before, only remembering meeting Yasuho in a public toilet.

Josuke investigates the stairs in the yard and finds himself in a fruit garden. Among fig trees, Norisuke meets him there and tells him how the Higashikata's are a fruit growing family, sustaining themselves by growing and trading. Frustrated and confused, Josuke assaults him with questions about who he is. Norisuke agrees to answer, but only one question. Josuke asks him why he killed Yoshikage Kira, but Norisuke denies he did for three reasons: If he wanted Kira dead, and Josuke is half of Kira, he would not have taken Josuke in as his son; The Higashikatas and the Kiras have the same fate of being afflicted by the skin-folding disease; Kira apparently had a cure for the disease before he died, and Norisuke needs Kira to save Tsurugi from his fate. Norisuke says that he was saved from the disease by his parents sacrificing themselves and figures he will have to do the same to save Tsurugi.

Josuke tells Norisuke that he thinks Tsurugi must have Yasuho somewhere. Norisuke is surprised Josuke managed to decipher Tsurugi's Stand and agrees to go with him to investigate the garden basement, where Tsurugi most likely is. As they approach the trapdoor leading to the basement, Norisuke gives Josuke a glimpse of his Stand: a blank humanoid figure made out of jigsaw pieces, and claims it is a long range Stand, but gives no other information, stating "Your Stand is like your asshole, you can't go around showing it off to people."

Josuke is suddenly attacked by Yotsuyu Yagiyama, who attacked Yasuho. Although Yagiyama gets away, Josuke and Norisuke notice that something is slightly off about the garden. They notice that the large flower pots that surround the trapdoor are slowly inching towards them, soon beginning to accelerate. They try to get away but are flanked and struck by all four pots as Yagiyama watches from the trapdoor.