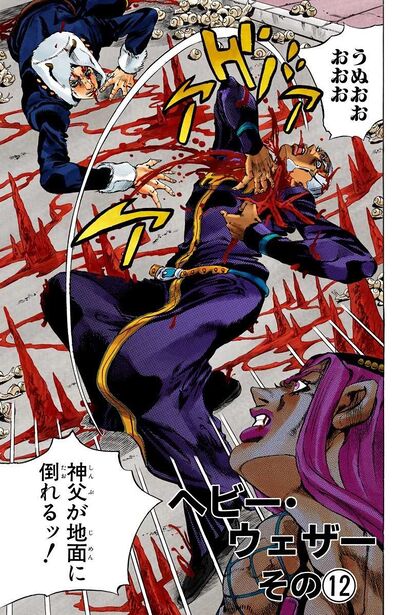 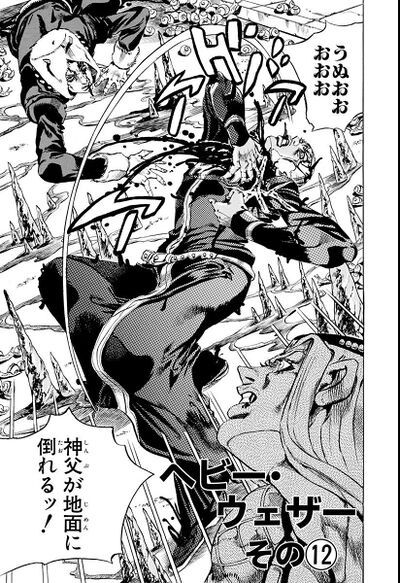 Pucci, impaled in the jaw by a frozen blood spike, is about to fall and impale himself into blood spikes on the ground. Weather uses the air pressure to disequilibrate him, but Pucci is determined to avoid the attack; he breaks several spikes, throwing them at Weather in the hopes that Weather tries to protect himself and weakens his attack. But Weather has a death wish, and calmly suffers being impaled by the spikes, only freezing the blood further to tie Pucci. Now in range, Weather Report punches Pucci and immobilizes him to the ground. Pucci tries to beg Weather, but he shuts him up, declaring that Pucci is an evil oblivious of his evilness, and goes for a finishing punch.

Suddenly, a car crashes next to them, causing chaos and separating the twin brothers. It was Versus, who rode alongside Jolyne, Ermes and Emporio but crashed, unable to control the car after Weather unwittingly created a cloud of dust. Jolyne feels that Pucci is nearby, but the priest has already punched through Weather's chest, supposedly aided by Fate.