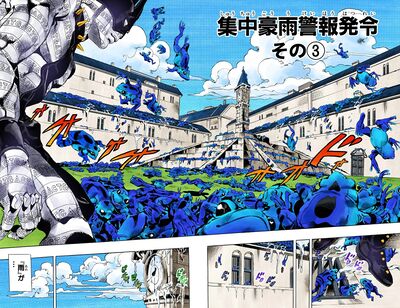 It continues Jolyne's attempt to deliver Star Platinum's DISC to her contact from the Speedwagon Foundation as Whitesnake intervenes to stop her, Enrico Pucci hidden nearby.

Pucci recalls a conversation he once had with his close friend, DIO, over a way to get to heaven. DIO tells him that he had written the instructions down in a notebook. However, in 1989, just a year later, DIO was defeated by Jotaro Kujo. Jotaro found the notebook, and in order to prevent anyone from learning of its contents, he burned it to ashes. Now, thanks to his Stand, Whitesnake, Pucci was able to steal Jotaro's memories along with the invincible Stand that defeated The World. However the Stand Disc containing Star Platinum was taken back by Jolyne Cujoh, and is about to be returned via the Speedwagon Foundation in the prison courtyard.

In the courtyard awaited a guard under Pucci's control. He shoots Jolyne in the abdomen a few times. The guard attempts to retrieve the Disc, but is stopped by a poison dart frog that fell from the sky. The guard looks up to see hundreds of frogs raining from the sky. The frogs break through the windows and land dangerously close to Pucci. He recognizes this as the ability of Weather's Weather Report. He uses his Stand to keep the frogs away from him, but drops his pass card underneath the mass of amphibians. Jolyne creates a net of strings to prevent the frogs from landing on her. The guard under Pucci's control tries to rescue the priest, but dies from coming into contact with too much poison. On the other side of the gate, another guard approaches. Instead of helping Pucci, he runs for his life. Using Whitesnake, and a frog, Pucci manages to blind the guard and force him over to the gate. The guard opens the gate, and Pucci makes his exit, leaving the guard to die. Whitesnake enters the courtyard in search of Jotaro's Disc. He finds what appears to be Jolyne's corpse covered with frogs. Whitesnake finds the Disc, but Jolyne reveals herself to be alive and uses a string to take the Disc from Whitesnake. He tries to kill Jolyne, but its too late as the messenger from the SPW has already retrieved the Disc. The messenger is in fact a pigeon named Savage Garden. Hearing guards approaching, Whitesnake makes his retreat, but Jolyne attaches a string to the Stand in order to discern its user's identity. Pucci consoles himself, claiming he has no need for the Stand Disc, and that everything continues to go according to plan.[1]