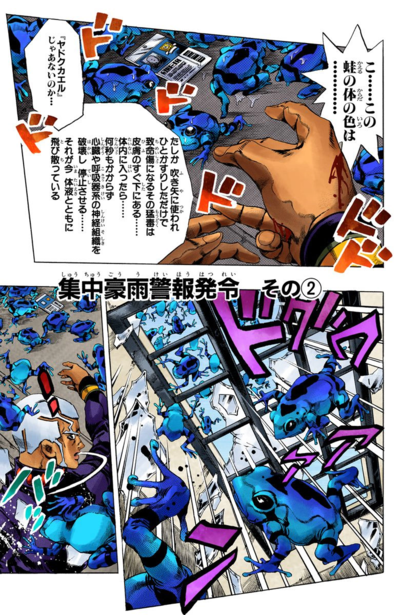 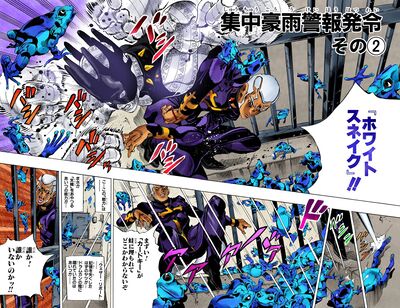 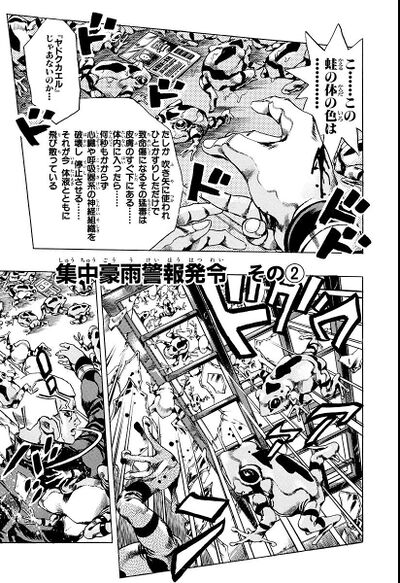 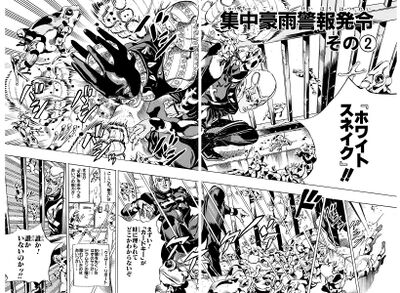 Poison dart frogs rain from the sky under the effect of Weather Report; some break through the windows and fall into the prison, dangerously near Pucci. Pucci recognizes these frogs as extremely deadly, and uses Whitesnake to keep them away. However, the priest's I.D. card had fallen under the frogs, trapping him inside the room. He figures that this must be the work of Weather and his Stand.

In the courtyard, Jolyne lies on the ground, bleeding from bullet wounds. She creates a net of strings in order to keep the frogs off her, cocooning herself in the string, but the frog's toxins begin to seep through the net. Pucci begins counting prime numbers in order to calm down. He calls for the guard he had manipulated. The guard appears, horribly deformed from the poison. He tries to approach Pucci, but is struck down by the raining frogs. Another guard appears, confused by the situation.

Pucci tries to get him to open the gate, but the guard runs away in fear. Pucci creates a disc, kicks a frog into the air, and throws the disc into the frog. He commands the frog to explode after flying ten meters, getting its various fluid and gore all over the guard's face. The guard falls over, hitting his head on the wall. Pucci goads him over to the gate, and uses his I.D. card to open it. Pucci contemplates what to do about Jotaro's Stand Disc as he walks away, leaving the guard to die.