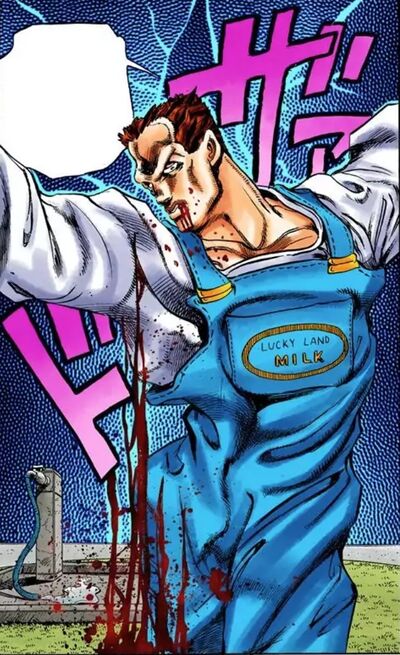 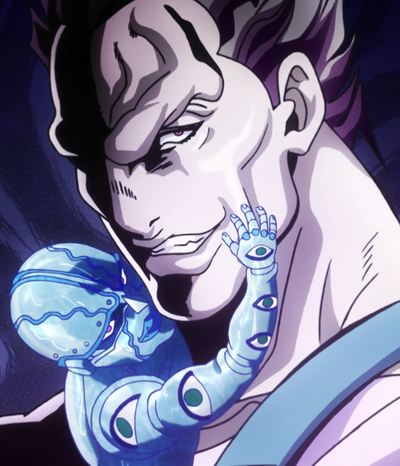 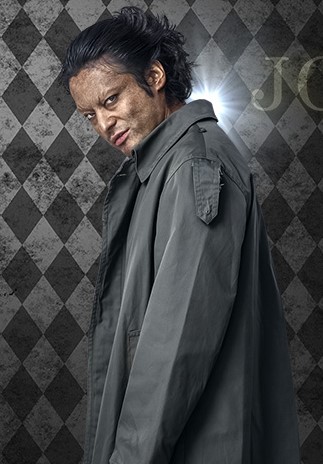 Angelo is an infamous, cold-blooded criminal from the town of Morioh. Turned into a Stand User by Keicho Nijimura, Jotaro Kujo is prompted to alert Josuke Higashikata of his presence. A chance encounter soon leads the two into battle with Angelo and his water-based Stand, Aqua Necklace.

Angelo is a tall, well-built man. He has short, spiky hair and prominent, hairless, sharply angled brows. He wears a milkman uniform consisting of overalls, a long sleeve shirt, simple shoes with laces and no socks, and a baseball cap during his assault on the Higashikata household. The overalls and cap bear the logo of Lucky Land Milk. During flashbacks, he wears a simple prison uniform of a short-sleeve collared shirt and pants.

Angelo is one of Japan's most corrupt, degenerate criminals. He has committed countless crimes, including robbery, kidnapping, ransom, and rape, since he was 12 years old. He is especially sexually depraved, having committed rape at 12 years old and raping two 14-year-old boys later on.[3] Evidently, Angelo feels no remorse for any of his crimes, even admitting that he is a damned soul.[4] To him, committing crimes, especially with his Stand, is a fun pastime.[3][5] People that interrupt his plans infuriate him, so he naturally tries to kill them.[3][6]

With an IQ of 160,[2] Angelo demonstrates immense guile. He is adept at using Aqua Necklace, able to work around its weaknesses upon learning them. In addition, he is able to predict what his opponents will do and proceed accordingly.[4] He is even sly enough to turn on as many sources of water, both liquid and gaseous, as possible in the Higashikata household without being noticed.[7] His intelligence is combined with a surprising level of patience. He will wait as long as is necessary for an advantage such as rain to arise.[7] Once he decides on a goal, he becomes absolutely determined and will do whatever he must to succeed.

Not adhering to society's standards, he also has his own odd set of standards, particularly having a hatred for people he perceives as arrogant.[6] In this, he finds joy. Seeing the arrogant fall into despair is one of his favorite things to witness.[8] Another source of joy for Angelo is when his predictions end up correct. He describes these moments as pure bliss and laughter-inducing.[4]

When cornered, Angelo becomes somewhat cowardly and will try to sway his attacker through emotions.[4] However, he remains cunning and will attempt to save his life however he can, such as taking anyone available hostage.[5]

At the age of 12, Angelo was convicted for robbery and rape, and since then spent 20 years in prison. He became known as one of the biggest criminals in Japan, having been guilty of the rape and murder of three boys, on March 1994. He was eventually arrested by Ryohei Higashikata, and obtained his stand in prison from Keicho Nijimura using the Bow and Arrow. He was hanged in October, but he mysteriously survived his sentence and escaped two weeks later after the failed execution. Once out of prison, Angelo goes on a killing spree, getting people to drink his watery Stand before using it to cause their heads to be torn apart from within, as well as possessing people's bodies to commit crimes.

Angelo was detected by Hermit Purple as a man representing danger to Josuke Higashikata. In March 1999,[9] Angelo met Josuke after his plan to use an ordinary man to commit a robbery was foiled by Josuke. As an act of vengeance against Josuke and Ryohei, Angelo tricked and killed Ryohei, planning to do the same to Josuke before assaulting his mother. Angelo waited until a rainy day came to get an advantage over Jotaro and Josuke in Josuke's home. 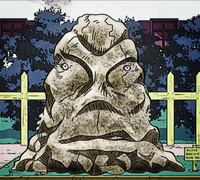 Rohan Kishibe passes by Angelo Rock, which now seems to have a playground built near it.[10] 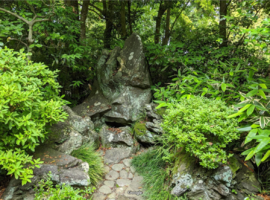