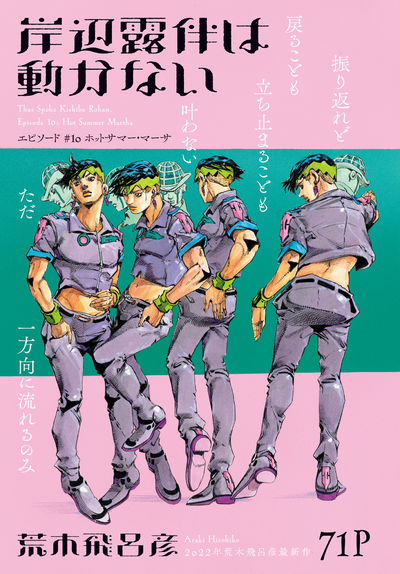 The chapter was published in the first issue of JOJO magazine on March 19, 2022.[1][2] Araki first teased that the one-shot was being made when he accepted his Iwate Hometown Special Manga Award on December 19, 2021.[3]

An adaptation of the one-shot was produced as a TV Drama and was broadcasted on December 26, 2022.

It's July 7, 2021 and Morioh is halfway through the Summer. Rohan Kishibe looks out his window with his puppy, Bakin, watching the rain only fall on Mutsu-kabe. While getting food out of his fridge for Bakin, he accidentally drops the container and it shatters on the ground. After Rohan gets Bakin some other snacks, Kyoka Izumi calls him to discuss work. She is worried about Rohan's design for Hot Summer Martha because having three circles in the design could lead to consumer complaints. However, Rohan rebukes that three circles is a design that even ancient Celts would have drawn.

A woman trespasses onto Rohan's garden claiming to be Rohan's fan, but Rohan turns her away and mentions he already gave her an autograph twice. Rohan then accidentally knocks over his ink all over his manuscript and blames that his mask is cutting off his oxygen, making him do stupid things. He's also stressed about not being able to go out anywhere due to COVID-19, so he's unable to do research for his manga. Kyoka attempts to comfort Rohan by saying they could go on an overseas trip once the state of emergency is lifted but Rohan knows she'll just wish him good luck to meet his deadline after that. He storms out of his house for a walk, claiming that Bakin is the only one on his side.

As he starts walking, he passes by a group of girls not practicing social distancing, a man coughing several times, and another man exhaling with his mask off. Rohan thinks that he might be depressed and never expected to feel this way before. Eventually, he reaches Mutsu-kabe Shrine while walking with Bakin. He notices that although there's one tree marked "Sacred Tree", the oldest tree in the shrine is actually a Japanese yew tree on the other side. Deciding to investigate it, he finds some stones covering the bottom of the tree. He moves the stones apart to reveal an entrance that leads inside the tree trunk. Inside, there is a small shrine with a mirror and pot in front of it. Rohan is thrilled to finally find something intriguing after years of solitude in the pandemic. He looks at his phone and notices that it's gotten late already so he heads back home to do work. The date is now October 7.

After he's home, he notices his phone has 52 unread messages with Kyoka telling him that his work is a masterpiece and she'll be there to return the manuscript. As Rohan is confused as to what she's talking about, he steps on a broken duck toy. He's surprised that Bakin already finished teething so suddenly to be able to destroy the toy. Once he reaches his desk, he is stunned to find several completed pages of Hot Summer Martha. He immediately calls Kyoka asking what she did to his manuscript and why she changed his design to have four circles instead of three without telling him. Kyoka is extremely confused and mentions she already returned his manuscript to him two weeks prior after they scanned and published it. Suddenly, he hears someone behind him.

Rohan goes to his bedroom and finds the fangirl from earlier naked in his bed. Shocked, he grabs a baseball bat and asked how she got in. She ignores the question and leaves to the bathroom. Rohan finally notices the date on his calendar and also checks his security camera. The footage reveals that on the previous night, a smirking man who looked just like Rohan entered his house with the woman through the front door. The woman returns from her bathroom trip and asks Rohan if she would like to see her pet crocodile, Mu-chan. However, Rohan immediately uses Heaven's Door to read her information. Her name is Eve and she is 19 years old. Her pages are full of being in love with Rohan, and the time she spent with him throughout October. Rohan wonders if he's going crazy about the time jumping from July to October and starts having a panic attack. He deduces that the shrine he entered must have been the cause and runs back there.

The chief priest of the shrine and his son ask Rohan what's wrong. After Rohan explains his predicament, they explain that the yew tree is 800 years old and the cavity inside it formed 500 years ago. "Yabubako-Hoshi" lives inside the tree and caused what Rohan had experienced. It is a reflection of Rohan's dark side from when he looked at the mirror inside the tree. Yabubako-Hoshi left the tree to do as it pleased, spending three months in Rohan's place before coming back. The ancestors of the priests tried sealing off the entrance of the shrine with the stones, but every so often, someone would find it and enter the tree like Rohan. Rohan asks how he can change things back to normal. Although the priests mention that he cannot go back in time, the actions of Yabubako-Hoshi can be undone if the mirror is rotated 360 degrees to the left without Rohan's reflection being seen by the mirror.

Rohan uses Heaven's Door to enter the tree and turn the mirror. Once he heads back home, his phone synchronizes and he learns that another three months has passed, making the date January 7. His house is full of blood and organs splattered everywhere. Bakin has grown into a large, vicious dog and chewed apart Eve's pet crocodile. When Rohan shows Bakin his leash and tries calming him down, Bakin whimpers and hides in fear, causing Rohan to wonder what Yabubako-Hoshi did to him. Rohan heads back to his office and finds that his Hot Summer Martha design was also turned into a figure. He figures that Yabubako-Hoshi must have noticed Heaven's Door and still managed to leave the tree without seeing Rohan's reflection.

Wondering whether someone is still in his house, he finds Kyoka unconscious without a pulse in his closet. She has a hole in her neck from a syringe which he sees on the ground. As soon as he worries about who drugged her, Eve appears behind him and stabs him in the neck with a syringe as well. She assumed Rohan was cheating on her with Kyoka. When Rohan demands that she calls an ambulance since Kyoka is innocent, Eve reveals that she's pregnant with Rohan's child. After kicking his phone away and shattering it, Eve tells him that she can tell Rohan is somehow able to read minds when he touches someone with his hands.

Instead, Rohan uses Heaven's Door on himself, revealing a few pages on his hand. He tells Eve that it contains everything about him, and she can learn the truth about whether he loves her or not. As soon as Eve gets closer to his hand to read it, Rohan uses Heaven's Door on her. He orders her to immediately go to Mutsu-kabe Shrine, find the old yew tree, and turn the mirror to the left. She does so and Yabubako-Hoshi switches from being Rohan's doppelgänger to Eve's. Rohan finally wakes up as Yabubako-Hoshi's actions as Rohan's doppelgänger have been reverted. Yabubako-Hoshi then returns to Rohan's house with Eve's appearance. Rohan yells out the window that he'll call the police if she enters his property again and warns Yabubako-Hoshi not to do anything bad. He also returns Eve's crocodile, who is now revived. Kyoka wakes up and assumes she must have fallen asleep, petting Bakin on her way out. As she leaves, Rohan notices his Hot Summer Martha figure still has a design using four circles instead of three. Thus, he realizes that Yabubako-Hoshi had nothing to do with his design changing and Kyoka had changed it all along.