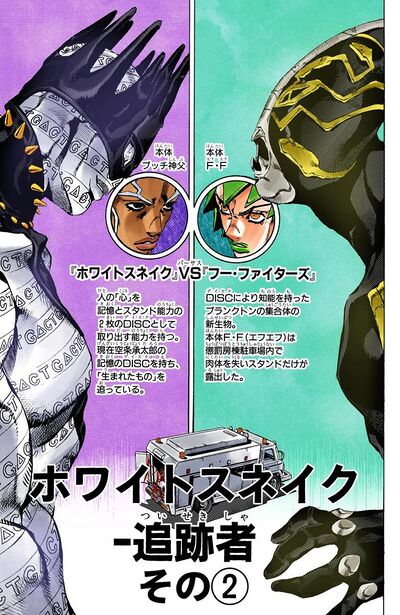 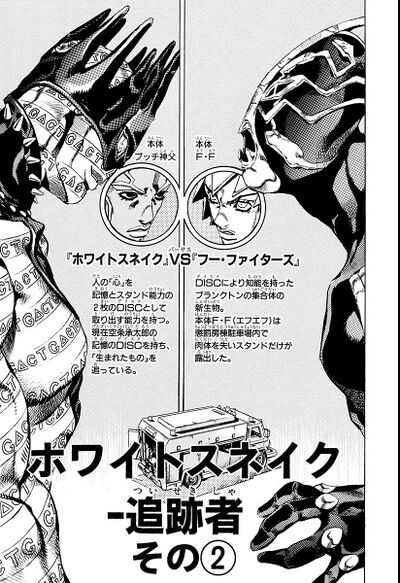 F.F. is determined to reach the faucet to get water and survive, if only so she can tell Jolyne about Pucci. Suddenly, Whitesnake grabs her from underneath the wheel of the driver's seat, tugging her down. Whitesnake says that it has a few questions for her; it chops into F.F.'s head, trying to steal her disc, but she screams and starts shooting it violently. Half of her body flies out of the passenger side of the ambulance, and she looks over to the faucet.

Pucci is seen standing nearby, asking her if she saw what was born and for her specific opinion about it. F.F. denies most of what he asks, answering vaguely. Soon enough, Pucci catches on, noticing that F.F. is merely conversing to distract him and Whitesnake. Suddenly, the bottom half of F.F., which is revealed to contain the brain—goes to the faucet, is boiled by the water rather than being rejuvenated. Pucci explains that he inserted a disc that makes all water boil when F.F. touches it. F.F. screams for Jolyne, then disintegrates.

(Cover only) (Mentioned only)
DIO