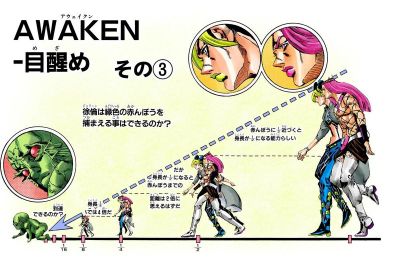 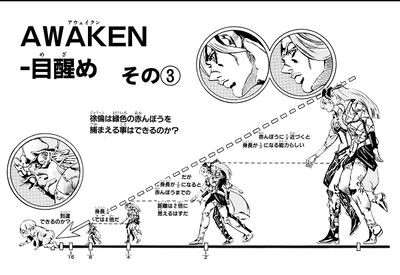 Awaken, Part 3 (-目覚め その③, Aweikun - Mezame Sono 3), originally The Way to Get Closer (追いつく方法, Oitsuku Hōhō) in the WSJ release, is the eighty-seventh chapter of Stone Ocean and the six hundred eighty-first chapter of the JoJo's Bizarre Adventure manga.

Anasui hears something, telling Jolyne to wait and listen. He realizes that guard dogs are chasing them, who can probably smell their scent. Jolyne realizes that Whitesnake is probably approaching with the guards, and that he is the only one who can properly utilize the Green Baby's abilities.

Anasui recommends hiding over going after the child, but Jolyne darts toward the Green Baby carelessly. Anasui recognizes Jolyne's ability to focus on one thing, and hopes that one day she will look at him with the same concentration. Jolyne keeps running closer, shooting string at the baby with Stone Free; she unravels the string so much that her body begins to fall apart.

Despite Anasui's warnings, Jolyne refuses to believe that she can't reach the baby. She climbs a nearby plant and declares that she will jump down on top of the baby, as all things have to hit the ground eventually. The string that she's using suddenly grows heavy, and she sees a Stand climbing up it. The Stand nibbles on the string, and Jolyne realizes that this must be the Green Baby's.