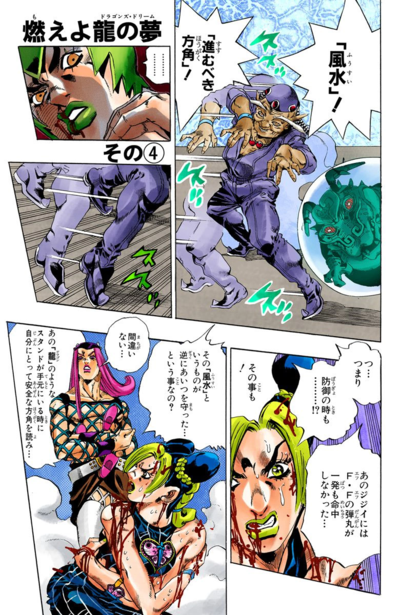 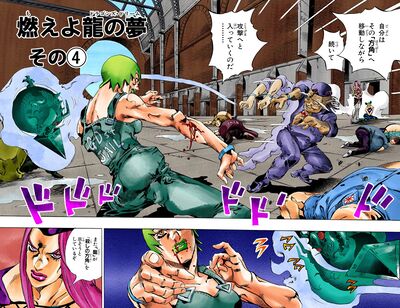 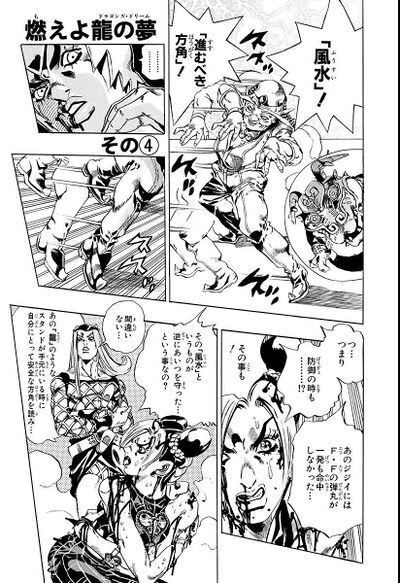 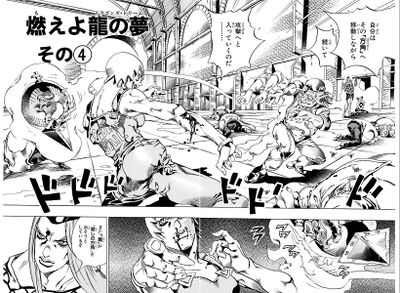 Enter the Dragon's Dream, Part 4 (燃えよ その④, Moe yo Doragonzu Dorīmu Sono 4), originally The Fan (, Fan) in the WSJ release, is the seventieth chapter of Stone Ocean and the six hundred sixty-fourth chapter of the JoJo's Bizarre Adventure manga.

Anasui and Jolyne figure out that Kenzou uses his Stand, paired with feng shui, to fight F.F.; Dragon's Dream allows Kenzou to identify lucky and unlucky spots and use them to his advantage. Jolyne tells this to F.F., causing Kenzou to scold Dragon's Dream for revealing too much. The Stand believes it's unfair to keep feng shui secret and informs F.F. about her unlucky spots.

Kenzou comes from behind to strike. F.F. kicks the old man, but he manages to strike her lower neck. This forces her mouth open, allowing the old man to stick his hand inside. Before he can use his drowning technique, F.F. bites down on his hand, then kicks him away from her. Kenzou manages to kick her into Dragon's Dream. Upon contact, her arm separates from her torso, which is sent flying into a bloated prisoner and returns to F.F. Dragon's Dream then explains that F.F. is in an unlucky spot, and warns her to reduce the damage from the next attack as best she can.

As two bugs fly upward, a bird swoops down and catches one. This bird flies right into an exhaust fan hanging from the ceiling. Due to Planet Waves' meteors, the fan was already damaged and now falls to pieces over F.F. One blade falls and flies through the air like a boomerang straight through F.F., slicing open her skull.