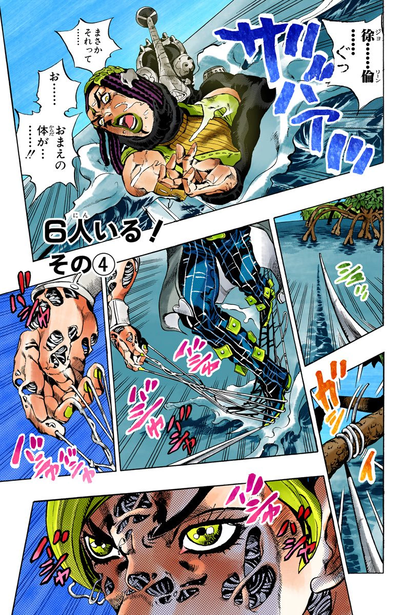 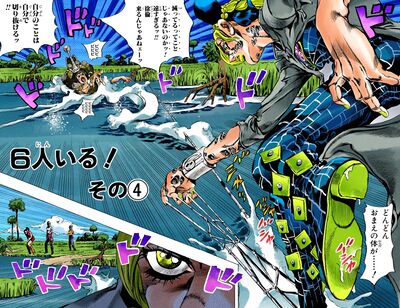 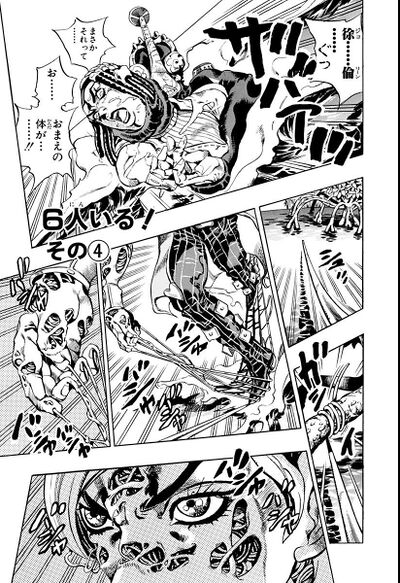 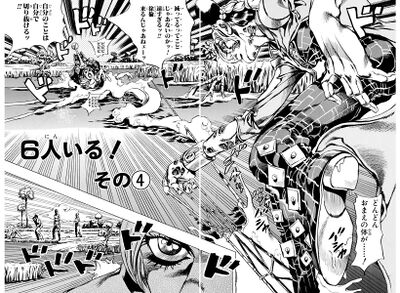 There's Six of Us!, Part 4 (6人いる！ その④, 6-nin Iru! Sono 4), originally No Way!! (バカなっ!!, Bakana!!) in the WSJ release, is the twenty-ninth chapter of Stone Ocean and the six hundred twenty-third chapter of the JoJo's Bizarre Adventure manga.

Jolyne creates a net above the water, allowing her to reach Ermes without being attacked by the Stand. Stone Free punches the Stand, but it grabs her fist. The Stand manipulates its hand to slip into Stone Free's fist and force it open. The Stand, called Foo Fighters, punches Jolyne in the abdomen, but the latter uses her ability to create a hole in the spot punched.

While holding onto Foo Fighters' arm, Stone Free kicks it in the face and then continues to pummel it with her fists. Jolyne and Ermes grab onto the string net, pulling themselves toward the coast. However, F.F. swims after them and grabs onto Jolyne's leg. Ermes reveals that she had placed a sticker on its arm. The sticker comes off and destroys F.F.'s arm. The two inmates successfully land on the beach. F.F. regenerates its arm and dives back into the water.

The other inmates in the search party use the guard's radio to contact the prison. One inmate asks what Jolyne and Ermes were doing in the water, and Ermes orders them to stay away from it. She deduces that one of them must be the Stand user, and the inmates start arguing over who the killer is. Jolyne informs Ermes that one of them has a nose bleed, possibly caused by the hit F.F. took to the face.

({DISC Only) (Mentioned only)
Star Platinum