Made in Heaven, Part 7 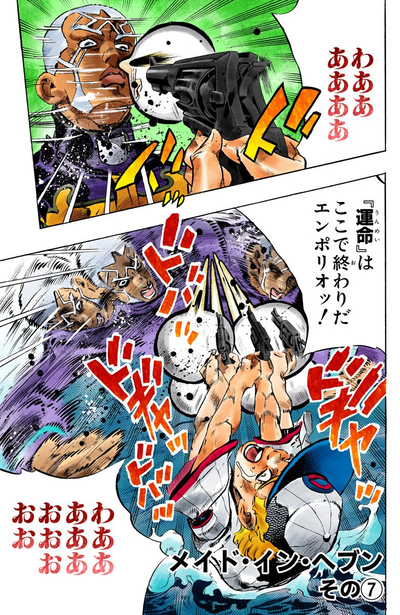 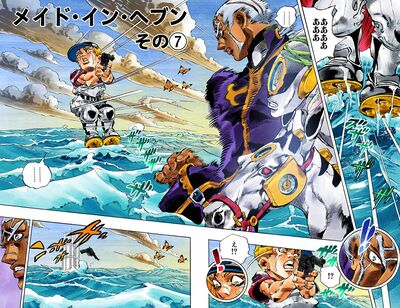 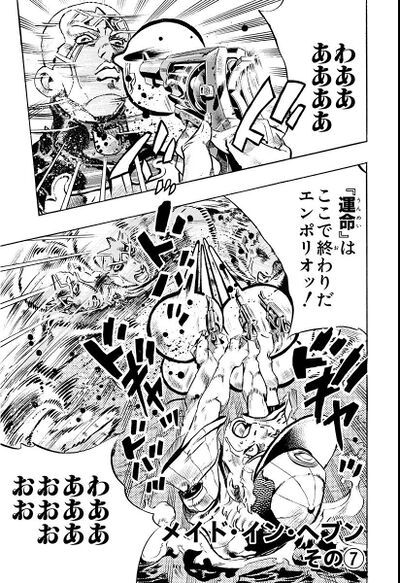 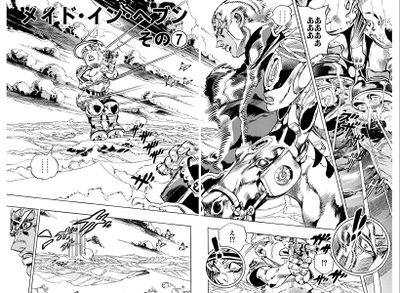 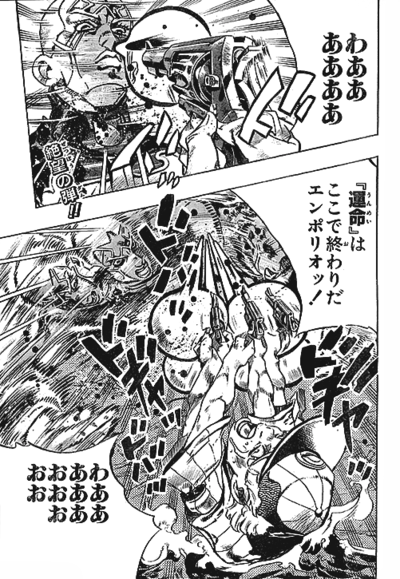 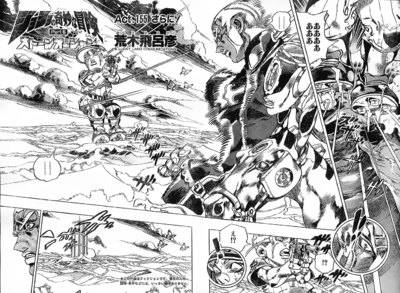 Made in Heaven, Part 7 (メイド・イン・ヘブン その⑦, Meido In Hebun Sono 7), originally Beyond! (さらに！, Sarani!) in the WSJ release, is the one hundred fifty-fifth chapter of Stone Ocean and the seven hundred forty-ninth chapter of the JoJo's Bizarre Adventure manga.

Emporio tries to shoot Pucci, but Pucci effortlessly avoids the bullets and attacks. However, Emporio inexplicably moves backward and sinks into the water. Pucci looks at the corpses of Emporio's friends, and realizes that Jolyne is still alive. Immediately, Stone Free attacks from the water, aiming to punch the priest who avoids the punches by jumping. However a knife suddenly appears and hits his right eye. Furious, Pucci dives into the water, knowing that his speed surpasses Jolyne's. But instead of her, Pucci sees several dolphins swimming away, Jolyne and Emporio tied to one of them. Pucci then tries to swim toward them, but Jolyne explains that he will never dare catch up to them, as swimming so far from the coast means drowning. Pucci nonetheless pursues the remaining enemies he has.

Emporio shouts at Jolyne to get to the dolphin. Yet Jolyne, ponders that everyone contributed to this one moment, and says to Emporio that the dolphin will safely carry him. She declares that Pucci will be able to pursue her wherever she flees because of the mystical sense they share, and decides to sacrifice herself for Emporio's sake. As the corpses of Jotaro, Ermes and Anasui decay and disappear, Emporio begs Jolyne to come back, but Jolyne entrusts him with defeating the priest, cuts off her rope, and face off Pucci.

Daring the priest to come one last time, Jolyne exchanges a last few blows against him, and dies. Emporio can only call for Jolyne as he is taken away by the dolphin. 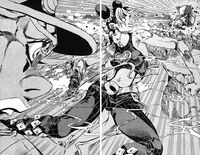