From JoJo's Bizarre Encyclopedia - JoJo Wiki
Jump to navigation Jump to search
This page is a translated version of the page Phantom Blood and the translation is 69% complete.
Manga
Anime (2012)
Film (2007)

“
Put simply, the theme of this work is 'living'. Through the two main characters, I want to examine two ways of living. It's all about singing the hymn of the battle between 'human' and 'non-human' ...
”
—Hirohiko Araki, author's note, Vol. 1

Between the 12th and 16th Century AD, an Aztec tribe performs a human sacrifice during which a man donning a Stone Mask drips his Mask in a murdered young woman's blood. The Mask activates, and many spikes pierce the man's skull. This gives him the ability to suck another's blood with his finger as well as superhuman strength. It is revealed that this tribe tried to take over the world, but was somehow stopped.

, England,[4] 1880, the young Jonathan Joestar, known to his friends as JoJo, is peacefully living at his father George's wealthy estate. Another young boy from London

, Dio Brando, is adopted by them due to having recently lost his father, Dario. George believed that he and his infant son were rescued by Dario during a stagecoach accident, in which his wife lost her life. As it turns out, Dario was trying to loot their corpses.

Jonathan and Dio meet for the first time

Jonathan attempts to befriend Dio, unaware of his plan to break his spirit through constant bullying and earn George's trust so that he can become the sole heir to the Joestar fortune.

As part of his scheme, Dio torments Jonathan in ways such as "mistaking" his dog Danny as aggressive as an excuse to knee it in the jaw, violently beating him in a boxing match while turning his friends against him, all of which is done while presenting himself before Jonathan's father as a better gentleman and student than his adoptive brother. When Jonathan finds solace in a relationship with Erina Pendleton, Dio steals her first kiss.

This one affront makes Jonathan angry enough to openly confront Dio, as well give him the strength to beat him for the first time. Dio discovers that Jonathan is tougher than he thought. After burning Jonathan's dog Danny to death in an incinerator as revenge, decides to bide his time and try to earn Jonathan's trust.

A little over seven years later, in the year 1888, both Jonathan and Dio have now become friendly and trustworthy to each other, which follows Dio's scheme. They have become top students and are about to graduate in their respective fields. Unfortunately, George has been ill for some time. Jonathan becomes suspicious of Dio's excessive care for him and is certain that he has ulterior motives, especially after discovering an old letter written by Dario Brando on his deathbed requesting George Joestar to care for Dio. In his letter, Dario describes his symptoms, which were identical to George's mysterious ailment. Jonathan believes that Dio must have poisoned his father and plans to do the same with his own father. Jonathan confronts him about his suspicions, and Dio decides to dispose of Jonathan before he is exposed.

During one of their initial scuffles soon after Dio's arrival at the Joestar Estate, a few droplets of blood splattered onto an ancient mesoamerican stone mask George Joestar had acquired and left hanging on a wall in his vast mansion. When touched by blood, the mask extruded several bony hooks which, had anyone been wearing it, would have pierced his skull at several points. Only Dio and Jonathan witnessed the fact, and while the former maintained it to be nothing more than an instrument of torture and death, the young Joestar began pursuing research in the fields of Archaeology and Ethnology to find the history behind the artifact. Dio reasoned that if he made Jonathan wear the mask and then activated it in the manner previously described, his ensuing death could have been written off as a research accident due to his known interest in the artifact.

However, to be assured of the lethal effect of the mask, Dio experiments with it on a drunken beggar he finds in the streets. To his horror, the exposure to the mask's bony hooks not only does not kill his test subject but transforms him into a Vampire blessed with superhuman strenght and the ability to rejuvenate as he sucks Dio's blood. Dio is saved from the monster's attack when it is bathed in the morning sunlight and dies.

Returning home, still shaken from the recent events, Dio is surrounded by police constables summoned by Jonathan who, in a daring investigation in Ogre Street, managed to befriend the honorable criminal Robert E. O. Speedwagon and obtained from him the address of Chinese merchant Wang Chan, who provided Dio with the poison. Cornered, Dio attempts to stab Jonathan but hits George instead. After the knife hits George, Dio dons the Stone Mask and is then shot down by the policemen.

As George's life begins to fade, he tells Jonathan to forgive Dio. Dio then comes back as a vampire and slaughters the policemen. A tense fight between Jonathan and Dio ensues. Jonathan, attempting to find a way to kill the seemingly invulnerable creature, resorts to burning down his whole mansion while keeping Dio trapped inside. With great difficulties and impressive feats of strength performed, Jonathan manages to skewer the Vampire into the Statue of the Goddess of Love and escapes before being consumed by the flames himself.

After the battle, Jonathan is hospitalized and rekindles his relationship with Erina Pendleton. Meanwhile, Wang Chan tries to steal the Stone Mask but Dio, who had survived, stops him.

Main article: Pluck for Tomorrow and the Successor (story arc)

After recovering almost completely, Jonathan meets Will Anthonio Zeppeli, an Italian baron with a strange power called Ripple (波紋, Hamon), which is subsequently revealed to be a martial arts technique that allows the user to focus bodily energy into other kinds of energy via proper breathing (primarily the energy of sunlight, which is effective against vampires). After teaching Jonathan how to use the Ripple, they set out to seek the defeat of Dio, accompanied by Speedwagon.

In a tunnel leading to the town of Windknight's Lot, where Zeppeli knows Dio is hiding, the group is attacked by a zombified Jack the Ripper. Zeppeli manages to drive Jack away but then tells Jonathan to finish him off as a lesson. In the tunnels, Jonathan learns to use the Ripple in other ways than simply destroying Vampires. He manages to detect Jack the Ripper through a wall using a glass of wine and kills him.

Out of the tunnel, Windknight's Lot is now in sight. Suddenly, a boy named Poco steals the group's luggage, instigating a chase after him. However, after retrieving the boy and luggage, Poco shows no signs or memories of the event. Soon after, Dio and his army ambush the group, revealing to have hypnotized the boy to act as a trap for Jonathan's group to fall into. Jonathan and Zeppeli then discover with shock that Dio developed a counter to the Ripple, and Zeppeli's arms are frozen by him. Due to the new defense method that Dio had acquired, he can no longer conduct the Ripple and is rendered useless.

Dio reveals two exceptional zombies, Bruford and Tarkus, both legendary knights who had served as key individuals in the feud between Elizabeth I

and Mary, Queen of Scots

, in the 1500s. These two engage the group in combat. Dio, assured of his victory, leaves them. Bound by his pride, Bruford challenges Jonathan alone. However, Jonathan manages to injure the knight with the Ripple.

Bruford is killed by Jonathan, but not before befriending him and giving him his sword: Luck & Pluck. Tarkus then challenges Jonathan. With Zeppeli still weak and Jonathan exhausted, Tarkus forces the group to flee using a glider made of leaves that are fused together with the ripple. During their fight, Zeppeli explains his tragic past shared by the history of the Stone Mask and how he came to learn the Ripple.

After Zeppeli's backstory, Tarkus suddenly jumps toward the group, causing them to crash into a cliffside castle that once served as a training ground for knights. Jonathan becomes trapped in a room with Tarkus, who collars him in preparation for an old form of fighting, leaving the others outside. Jonathan is unable to breathe properly due to the collar and is unable to use the Ripple, leaving him in danger. However, Poco manages to sneak inside the room and allows Zeppeli and Speedwagon to enter. Zeppeli recognizes a prophecy foretelling his death and sacrifices himself to save Jonathan, transferring his life force to him, letting Jonathan overpower and kill Tarkus. Afterward, the group honors Zeppeli before the Ripple Master passes from his wounds.

The group finally reaches Windknight's Lot where Jonathan defeats a zombie named Adams. Zeppeli's Ripple master, Tonpetty, and his two disciples, Dire and Straizo, then show up to help Jonathan and Speedwagon. After rescuing Poco's sister from Dio's zombie Doobie, the group then directly confronts Dio. Dio calls off the horde that surrounded him, saying that Jonathan was his quarry and his alone. Dire steps forward, claiming his right to avenge Zeppeli before Jonathan and Dio can brawl. He engages Dio with his special move, the Thunder-Cross Split Attack, but is killed almost immediately by shattering after being frozen by Dio. Before he shattered completely, Dire managed to land a solid hit on Dio's face, which sent him flying into a rage. Dio calls upon his horde to attack the group while isolating Jonathan in the process, leaving the rest of the group to deal with Dio's zombie army.

The clash between Dio and Jonathan begins. A close quarter fight ensues, but Dio initially takes the advantage thanks to his blood-freezing ability. However, Jonathan manages to defrost himself with the fires surrounding them and deals a direct hit to Dio, who is sent into a cliff. Dio tears off his own head before the Ripple power could reach it and is saved by Wang Chan, who takes his head and promises to find Dio a new body. Jonathan and the group destroy the Stone Mask the next morning, having protected the town. 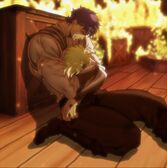 Shortly after the events in Windknight's Lot, Jonathan marries Erina. The couple see their companions off and board a ship to America for their honeymoon. But in the middle of the ocean, Jonathan suddenly notices Wang Chan and follows him straight into a trap set by Dio, now being just a severed head, who had boarded the ship in secret within a special coffin. Dio reveals to Jonathan that he plans to kill him and attach his own head to Jonathan's body before arriving in America. Although Dio manages to mortally wound Jonathan in front of Erina, Jonathan uses the last of his Ripple to destroy Wang Chan's head, causing his body to jam the ship's engine and trigger an explosion.

As he urges for Erina to flee, Jonathan is further wounded in the ensuing explosions by shrapnel from the engine. In a final attack, Dio ensnares Jonathan with tendrils from his neck and attempts to decapitate him, only for Jonathan to stab him with the shrapnel and thwart his assault. Jonathan holds Dio's head in his arms, reflecting on their fate as the ship begins to sink. Dio demands to be let free, only to find that Jonathan has already died from his wounds. The ship explodes with both men inside as Erina escapes in Dio's coffin, pregnant with Jonathan's child, as well as protecting a surviving infant whose parents were killed in the attack on the ship, thus setting in motion the events of the entire series.

Ally
Will A. Zeppeli

Jeff Back and Dan Hamar