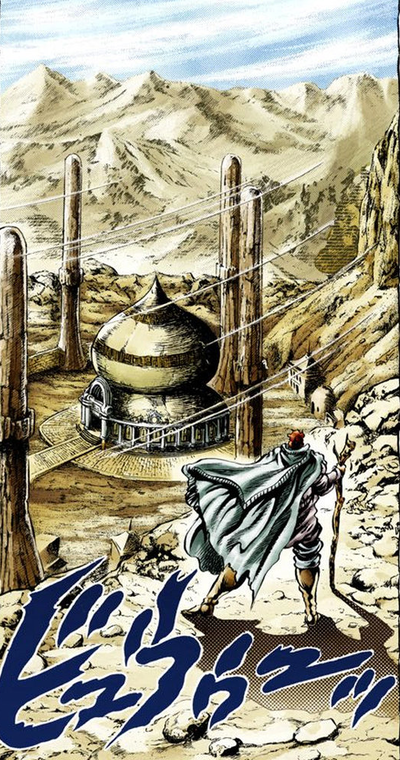 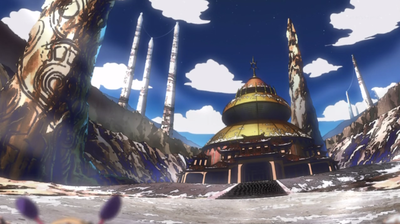 The Tibetan Temple (チベットの寺院, Chibetto no Jīn) is a location featured in the first part of the JoJo's Bizarre Adventure series, Phantom Blood.

Tonpetty and other monks reside in this temple and teach the Ripple to anyone disposed to confront the fate that awaits them. Will Anthonio Zeppeli travels here and learns the Ripple along with Dire and Straizo.

The temple is located in the depths of Tibet, at the head of the Salween River. It is situated in a rocky valley where no vegetation can be seen, and is surrounded by tall pillars of rock. Behind the temple is a training ground, which consists of several white pillars tied together with large ropes. The person undergoing training on these high-altitude ropes must focus their breath while keeping themselves from falling simultaneously.

Zeppeli, after experiencing the horrors of the Stone Mask, begins his search for a means of destroying its evil once and for all. During his travels, he comes upon a young man who claims to be a doctor and uses some kind of magic to heal his patients. Realizing its potential, Zeppeli asks the doctor where he learned this technique. The doctor instructs him to follow the Salween River, stating that he will eventually reach a temple.[1]

Upon arriving at this temple, Zeppeli meets Tonpetty, the master monk, who warns him that learning to use the Ripple will lead to his demise. Nonetheless, Zeppeli accepts his destiny and begins his training. Three years into his training, Zeppeli asks for and receives a second premonition of his fate, having reached the point of no return. While Tonpetty has numerous disciples, Dire and Straizo are particularly notable allies who assist the Joestar Group.

Decades later, Straizo has become Tonpetty's successor and has disciples of his own. However, he eventually betrays and murders them in favor of becoming an immortal vampire.[2]

Residents of the Tibetan Temple