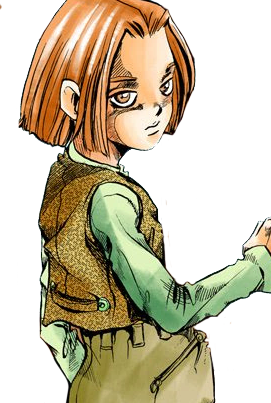 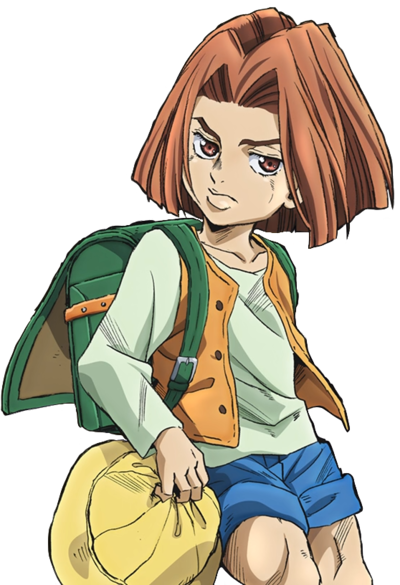 All-Star Battle
JoJo's Pitter-Patter Pop! (Playable)
“
You better not hurt me! You got that?! And you'd better not hurt mom, either!
”
—Hayato to Yoshikage Kira, Chapter 411: My Dad Is Not My Dad, Part 2

Hayato Kawajiri (川尻 早人, Kawajiri Hayato) is a primary ally featured in the fourth part of JoJo's Bizarre Adventure, Diamond is Unbreakable, playing a crucial role in the "My Dad Is Not My Dad" and "Crazy Diamond Is Unbreakable" story arcs. 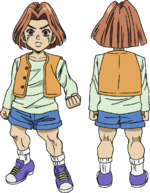 He is typically seen wearing a long sleeve shirt under a vest, a pair of shorts, and socks and shoes. The anime depicts two variants of this outfit with differing colors. During the Cat Likes Yoshikage Kira arc, he has a t-shirt on with D & G labeled on it.

Hayato is described as a "creepy kid" who likes robots[3] and spends most of his time in his bedroom. He rarely speaks to his parents, preferring to spy on them with electronic devices he has planted in their room. According to his mother, he has no close friends.

Hayato was born from Kosaku and Shinobu Kawajiri in the city of Morioh, around 1988. As he lived in an apathetic household, Hayato also inherited some of this apathy for his family. At one point, Hayato developed an interest in video surveillance and began installing cameras in his parents' bedroom.

One day, Hayato gets footage of Kira bringing a flower pot and cat food inside of his bedroom. He fakes going out to school in order to investigate the attic In there, he discovers Stray Cat although he mistakes it for a simple plant at first. In order to see better, he opens the window, only to see Stray Cat wake up. He then hears his Kira being back home and hurriedly tries to cover his tracks but when he tries to shut the window, Stray Cat shoots bubbles to immobilize him. Hayato has the presence of mind to use a compass to burst the air bubbles and manages to hide in time and properly cover his tracks by scattering the cat food. As Kira checks the room and figures that Stray Cat must have caused a ruckus on his own, he says that he is relieved because he would have had to kill Hayato if the boy was suspicious about him. Hearing this, Hayato realizes the truth about Kira. He begins following Kira and manages to record footage of him murdering a woman and her boyfriend.

Hayato Kawajiri appears in the game as part of "Kosaku Kawajiri" (Kira)'s Great Heat Attack, "Bites the Dust!". Kosaku grabs Hayato and forces him to run away from him in fear, exclaiming "Killer Queen! Third Bomb!". If Hayato bumps into the opponent, the camera zooms into the opponent's eye as Hayato screams, where Killer Queen appears and detonates the time bomb. The round timer rewinds by ten seconds and Kosaku regains health. If the opponent has gone through a transformation (Gold Experience Requiem, Made In Heaven, any Steel Ball Run character with the 3 corpse parts or Kars's Ultimate form), they are reverted back to their original forms. However, if the opponent manages to avoid the attack, Hayato will sprint the other direction.

Hayato appears in Diamond Records alongside Stray Cat as an assist character in both the Action Battle and Tactical Battle game modes. He has one 'Unity' type 4 star assist statue. Like all assist characters, when the active assists link together, his assist ability may provide extra effects (Action Battle mode only). Hayato also appears in the moveset of Matured Yoshikage Kira.
Moveset 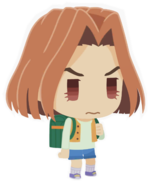 In the light novel JORGE JOESTAR, an incarnation of Hayato appears in the 37th universe. He appears the same and is still a grade school boy who is the son of Kosaku and Shinobu. Hayato is in the soccer team of his elementary school. After detectives get closer to finding Yoshikage Kira's identity, Kira brutally murders Shinobu and Hayato.[4]

Kars and Jorge Joestar (Universe 37) are teleported to a parallel world version of Morioh within the 37th universe as a result of The Funniest Valentine's Dirty Deeds Done Dirt Cheap. Jorge Joestar and Kars suddenly enter his house one day while Hayato and his family are eating dinner.

Seeing Kars, Kosaku orders Shinobu and Hayato to run away. Hayato then exclaims that he knew his father was hiding something since he's been acting weird. Kosaku once again desperately asks his family to leave causing Shinobu to drag Hayato out of the house's back door.[5]