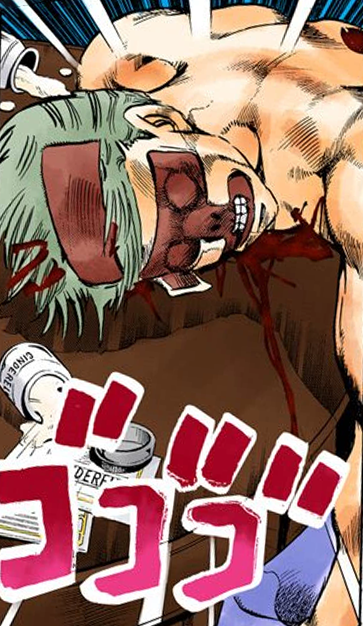 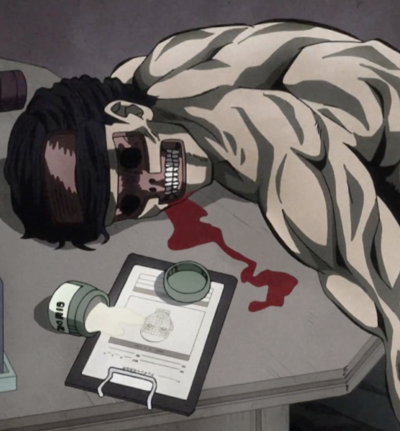 Eyes of Heaven
For a similar character, see Yoshikage Kira
“
My husband isn't a bad man. It's not like he's an alcoholic or anything... And even though his pay is pitiful, he always shows up for work.
”
—Shinobu Kawajiri about Kosaku Kawajiri, Chapter 370: Yoshikage Kira's New Situation, Part 1

Kosaku Kawajiri (川尻 浩作, Kawajiri Kōsaku) is a tertiary character featured in the fourth part of JoJo's Bizarre Adventure, Diamond is Unbreakable. Kosaku is an ordinary salaryman who is the husband of Shinobu Kawajiri and father of Hayato Kawajiri.

Yoshikage Kira murders Kosaku to preserve his quiet lifestyle and escape from being caught. After his death, Kira masquerades as Kosaku and integrates himself into Kosaku's family and life.[4]

Kosaku has spiky black hair, thin, dark eyes, and high cheekbones. He apparently has an identical body structure and size to Yoshikage Kira but has slightly bigger feet.[5] His facial features and a patch of his hair are removed by Cinderella after his death.

The series is known for alternating colors between media, the information presented below may or may not be canon.
Skin(Fair)
Hair(desaturated greenish-gray)
Skin(Pale)
Hair(Black)

According to his wife, Kosaku is an extremely plain and boring man[4] and the only things he would do after coming home from work is eat, shower, and sleep. He seems to be intelligent, as he went to a higher ranked college than Shinobu. She states that he isn't a bad man and he's hard working despite his pitiful salary. He also does not have bad habits like drinking. Shinobu's friends in college thought he was cool and quiet.[4]

Still, Kosaku is irresponsible with his money and debts. For instance he bought a house that was too expensive for his means and he owes 260,000 yen to his landlord.[4] His bank account is also empty as he just bought a new car and has to pay for Hayato's tuition.[4]

Kosaku seemed to have a submissive personality. According to Shinobu, he stays silent without getting angry if Shinobu taunts him.[6] When Shinobu left him a cup of instant noodles and "excused herself" by pretending she was busy, Shinobu expected Kosaku to stay silent and eat the noodles without making a fuss.[6] Yoshikage Kira also complained that Kosaku sucked up to his superiors at work in the hopes of getting a promotion.[7]

Also, Kosaku did not get along with his family. He was not close to Hayato.[8] He seems to dislike Shinobu's cat, as he would constantly close the window leaving the cat trapped in a tree outside the house despite Shinobu repeatedly insisting him to leave the window open.[4] He also disliked shiitake mushrooms and would complain about eating them in Shinobu's cooking.[1]

He also uses an electric shaver instead of a razor because he would often get razor burns.[4]

Kosaku met Shinobu in community college, although he went to a higher ranking college than her in the same area. She dated him because it made her feel superior to her friends, who thought Kosaku was cool and quiet. At some point she became pregnant with Hayato, obligating them to get married.[4]

Kosaku is on his way home from work at the same time Yoshikage Kira is fleeing from Josuke and his friends. He grabs Kosaku from the street because of their similar builds and drags him into Aya Tsuji's beauty salon, Cinderella. Kira kills Kosaku and then forces Aya to use her Stand to switch his face and fingerprints with Kosaku's. After Josuke and his friends arrive at the salon, Kosaku and Aya's bodies are completely disposed of with an explosion from Killer Queen.[9]

After evading his pursuers, Kira assumes Kosaku's identity and starts living with his family as well as going to Kosaku's workplace.[4] Kira eventually reveals his identity to a Female Paramedic as Yoshikage Kira before he dies. Therefore, aside from Hayato and Josuke's friends, the public never learns of the death of Kosaku Kawajiri.[8]

Kosaku's dead body, dressed as Kira NSFWTAG
The information below derives from a source not written by Araki. As such, it may or may not be considered canon.

In the light novel JORGE JOESTAR, Kosaku appears in the 37th universe. Yoshikage Kira (Universe 37) sets Bites the Dust on Kosaku to prevent anyone from discovering his identity after detectives start appearing in Morioh. His hairstyle is perfectly combed back, light, and striped by black strands, just like the Matured Kira in the original universe. Like Kira, he also wears a suit and a tie patterned with a column of skull emblems.[10]

At 8 AM on July 24, 2012, Kosaku and Diavolo (Universe ?) are lured to Arrow Cross House by Enrico Pucci (Universe 37). When Diavolo asks whether he's Kira, Bites the Dust activates. However, Diavolo uses King Crimson to delete the moment where Bites the Dust blows him up. With both still alive, time turns back an hour and then loops the same events. Eventually, Pucci speeds up time with Made in Heaven preventing either of them from moving and then slits their throats.[11] Their bodies are found by Team Bucciarati (Universe 37) in the study of Arrow Cross House, although they assume Kosaku's body is actually Kira.[12]

Leone Abbacchio (Universe 37) tries using his Stand Videodrome to determine what happened to them, but there is no record of them from midnight until eight AM, due to the time loop they were in before they died as well as Pucci speeding up time. Rohan Kishibe (Universe 37) also attempts to use Heaven's Door but every page is filled with the word 'death'. After Abbacchio and NYPD Blue perform an autopsy on their bodies, George Joestar (Universe O) finally discovers the truth of how they died.[11]

Kars and Jorge Joestar (Universe 37) are teleported to a parallel world version of Morioh within the 37th universe as a result of The Funniest Valentine's Dirty Deeds Done Dirt Cheap. They enter a house on the edge of Morioh where they meet Kosaku and his family. In this world, Kosaku works in manufacturing.

Seeing Kars, Kosaku desperately screams at Shinobu and Hayato to run away. Kars asks whether he's Kira and Kosaku confirms that he's a serial killer, causing Bites the Dust to explode. As Kars is immune to explosions, he puts Jorge inside him and travels back in time an hour.

However, this Kosaku is not actually Yoshikage Kira. Kars later explains that Kosaku did not smell of blood at all and was made into a bomb with Bites the Dust by the real Kira. Jorge realizes Kosaku said he was a serial killer because he felt guilty of how many people he indirectly killed with Bites the Dust. Jorge is glad that Kosaku hasn't died and could keep his family from harm. He becomes more motivated to catch Kira so Kosaku would be free from Bites the Dust.[10]

After the events of Eyes of Heaven, a new timeline is created. Kosaku survives in this timeline, as Kira seems to have been defeated before he could kill Kosaku.[13]