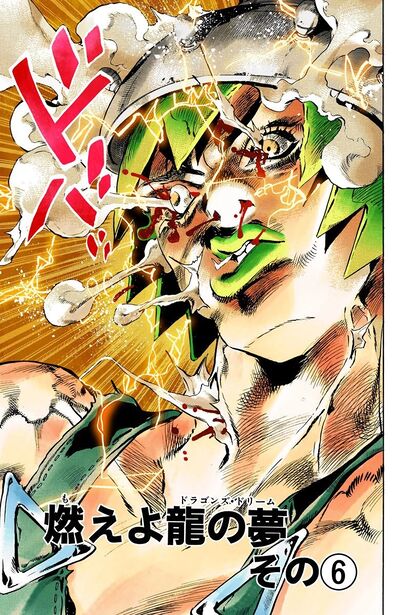 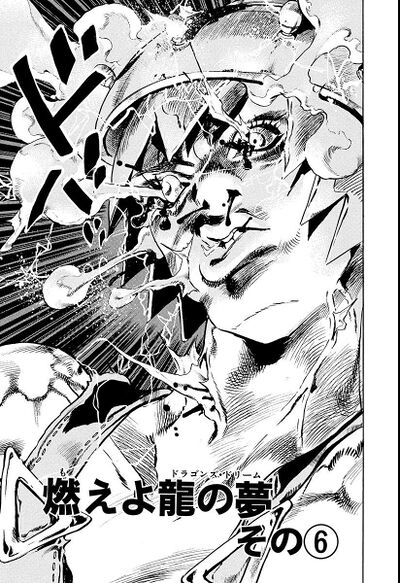 Trapped in the electric chair, F.F. is jolted with twenty-eight hundred volts. Kenzou gloats about his mastery of feng shui, proclaiming he will rise to one day rival Buddha. However, Dragon's Dream warns the old man that F.F. had previously absorbed water; when Kenzou kicked her, his sweat became her water, which she used to create a mirror. The Dragon's Dream that Kenzou was looking at was actually a reflection of the real Dragon's Dream, thus Kenzou isn't actually standing in a lucky spot.

F.F. grabs Kenzou, sending the twenty-eight hundred volts over to him. Jolyne and Anasui approach the execution chamber, while Anasui tells Jolyne that she should focus on finding the bone now that Kenzou is defeated. Since F.F. is in a state that doesn't allow her to heal Jolyne, Anasui recommends leaving her behind. Jolyne disregards this and jumps down the stairs into the chamber, while Anasui reprimands her for doing careless things for a lost cause.

Jolyne notices that Dragon's Dream is still there, meaning that Kenzou must still be alive. Jolyne unravels into string against Anasui's wishes, and Kenzou grabs his Stand and dodges her attack. With this, Jolyne now knows where the lucky spot is. In this spot, within a puddle, lies the few remaining plankton making up Foo Fighters.