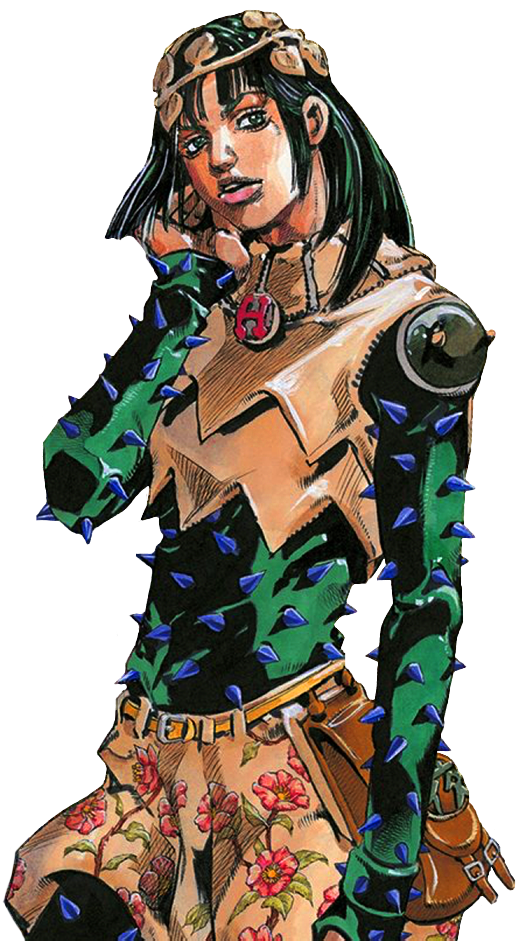 Suffocated from lack of skin respiration

He is an architect who worked on the Higashikata Family mansion and the baseball stadium where Aisho Dainenjiyama works.[4]

Yotsuyu is revealed to be a Rock Human with a stolen name, belonging to a Locacaca Organization. He attacks Josuke Higashikata in order to finish off Josuke's previous identity. Yotsuyu is a Stand User who wields the Stand, I Am a Rock.

Yagiyama is a man of slim build and average to above-average height, claiming to be 28 years old. He has shoulder-length, straight black hair with short bangs. His eyes are black with small triangular highlights.

He wears a headpiece of leaves and a collar with a pin bearing the letter H. His arms, stomach, and legs are clad in a dark, leathery material studded with small metallic spikes. Over this, he wears a crop top and a pair of floral-printed bloomers. Attached to his belt is a small pouch.

Later, his sex comes into question when his corpse is discovered to lack male external genital organs.

Yotsuyu Yagiyama is an ambitious and ruthless Rock Human.

Yotsuyu states that above all he desires social status[3] and at one point even declares his intention to steal Norisuke Higashikata IV's fortune.[5] 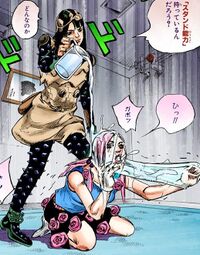 He is quite ruthless and calculating, as he repeatedly takes underhanded measures to fulfill his goal. As Josuke states, Yotsuyu is the type of person who will attack innocent people in order to show he is serious about his threats. For instance, during his first appearance, Yotsuyu uses waterboarding on Yasuho Hirose to force her to bring out her Stand.[6] He will also take her hostage to use her as bait and draw Josuke out in the open.[7] He also demonstrates manipulative prowess when exploiting Tsurugi's fear of his family's disease in order to coerce him into assisting in trapping Josuke.[8] As a member of the Locacaca Organization, Yotsuyu shows a vested interest in the Locacaca Tree and notably sought to kill Josuke Higashikata[3] since Josuke, as a fusion of Josefumi and Yoshikage Kira, is a loose end and knows the secret of the Locacaca.

Yotsuyu also demonstrates a tendency for tactical thinking and analyzing a fight. He likes to use chess metaphors[9] and openly analyze the situation to assert who has the advantage in combat and why Josuke's moves are futile.[10] However, Josuke outsmarts him and puts him in an impossible position where he's either forced to drown or reveal information on the Locacaca Organization.[11]

Yotsuyu had a previous encounter with the man who fused with Yoshikage Kira. He expresses annoyance at how persistent a hindrance Josuke is after exclaiming that he returned to life even after Yotsuyu himself killed him.[12] In his anger, Yotsuyu prefers to perform a last-ditch attack and sacrifices his life.[13]

Despite his ruthlessness and the natural sociopathy of Rock Humans, Aisho and Yotsuyu seemed to have a genuine friendship, and Aisho recalls Yagiyama in a positive and helpful light. In Aisho's flashback where Yagiyama woke up Aisho to save him from being killed while his house was demolished, and was sympathetic and supportive of the more naive Aisho after he found out his girlfriend had betrayed him.[14]

Yotsuyu has a particular opinion about Stands that are controlled unconsciously, finding them to be the "cutest, nicest kind".[15]

Main article: I Am a Rock

Yotsuyu's Stand is I Am a Rock. When Yotsuyu touches someone, the victim begins to naturally attract specific objects toward them. Additionally, he is able to attract rocks to himself to cause damage to people or objects close to him. 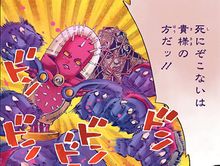 I Am a Rock demonstrating its confidence in hand-to-hand combat.

While similar to a human's, Yotsuyu's body can change into a rock. Because of this, he does not need to sleep or rest. He can mimic rocks to the point that he is indistinguishable from them.

Norisuke theorizes that Yotsuyu's physiology requires him to have at least a small amount of skin respiration and in the absence of such his body structure will begin to break down due to it becoming less structurally stable than an ordinary human's.

Also, it is curious to mention that Yotsuyu was able to produce a strange transparent film from his eyes/mouth which he used to waterboard Yasuho, but at this stage, it isn't confirmed whether this is a trait all 'Rock Humans' possess or something exclusive to Yagiyama.

Yotsuyu was born a nameless Rock Human. Although his youth is undisclosed, he managed to steal the identity of a young man named "Yotsuyu Yagiyama" and became an architect. As part of his job, Yotsuyu built the Higashikata House for Norisuke as well as the Higashikata Fruit Company's parlor,[16] and renovated Morioh's stadium. At the same time, he was working as Tamaki Damo's underling in the Locacaca Organization. At one point, Yotsuyu approached Jobin Higashikata to enlist him within the organization.

According to Aisho's flashback, at some point before the events of JoJolion, Yotsuyu was there to inform Dainenjiyama of his girlfriend's betrayal and it is implied that the two were at least acquainted with one another beforehand.

On August 19, 2011, Yotsuyu, alongside Tamaki Damo confronted the two men who stole a Locacaca branch: Josefumi Kujo and Yoshikage Kira. After both escaped, Yotsuyu was ordered by Tamaki to conduct a search in order to corner the thieves. Later Yotsuyu would mention being the one who killed Josefumi by 'crushing him between two rocks' and remark that if not for Kira, Josuke would never have been revived. However, it is shown that Yotsuyu didn't have a direct hand in Josefumi and Kira's demise and merely witnessed the A. Phex Brothers fall from a cliff. 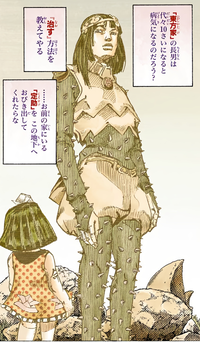 Yotsuyu promises to Tsurugi that he can cure his disease

Learning about the duo's survival in an amnesiac man dubbed "Josuke", Yotsuyu decides to eliminate the latter. He meets Tsurugi Higashikata and feeding the Locacaca to a dog, he tricks the young boy into helping him lure Josuke in the open.

Yotsuyu Yagiyama first appears in the story within the secret room below the Higashikata estate, watching Yasuho Hirose sleep. He uses a strange ability to suffocate her in an attempt to draw out Paisley Park and examine it. Once Paisley Park manifests, he uses his Stand to trap it in place and seems to be able to identify its unique abilities, such as it being a Long-Range-type Stand. While she is still trapped, he reveals that he is an architect scouting out interesting properties, such as the secret room, and states that he hopes that Josuke never retrieves his memories, appearing to know more than he lets on. Yasuho, in a last-ditch attempt to free herself, manages to fold an origami bunch of bananas, which she successfully uses to trip Yagiyama, as they are still powered by Tsurugi Higashikata's Stand Paper Moon King. Yagiyama falls onto broken glass Yasuho had earlier tried to use to cut the film on her face, and in the confusion his Stand's power weakens, freeing Yasuho from the film. Though seemingly injured, he mysteriously disappeared.

Later, he assaults Josuke and Norisuke as they attempt to gain access to the basement by touching Josuke's foot and activating his Stand to cause large flower pots to accelerate towards them as he watches from the entrance, surprised Josuke would return to the location just to die again. When the two manage to avoid the flower pot shards piercing into their bodies he activates his Stand a second time, only to cause thousands of chestnuts to advance on them instead.

When this fails Yotsuyu resorts to kidnapping Yasuho from inside the basement cellar and takes her out through the hidden fault in the roof caused by the earthquake. Josuke and Norisuke follow him using the latter's Stand King Nothing to track Yasuho's scent. He lays her down among rocks close to the shoreline and proceeds to hide so that when the two approach he can catch them by surprise using his rock skin to blend into his surroundings. This ambush culminates in him using his Stand for a third time; in order to lure Josuke outside and engage in a final ploy by attracting dozens of pesticide containers to him, hoping that they would burst and the liquid would seep into his skin and poison him.

Josuke's response is to encase Yotsuyu in a large soap bubble, intending to carry him off and drop him into the sea but Yagiyama is able to attract several nearby rocks towards himself in order to pop the bubble and set himself free, thinking he had foiled Josuke's plan. In reality, Josuke was merely positioning Yotsuyu closer to the shore so that he could tackle him off of the cliff-side into the water below.

In the end, Josuke used his soap bubbles to push Yotsuyu into the sea in an attempt to force information out of him, preventing them both from surfacing by wrapping his body in nets Norisuke salvaged from the shoreline. However, the unexpected happens when Yotsuyu's rock human physiology causes his body to break down when he no longer is capable of skin respiration, killing him. As his body breaks apart, Josuke spots the mysterious fruit floating away from his pocket and disappearing into the ocean current.