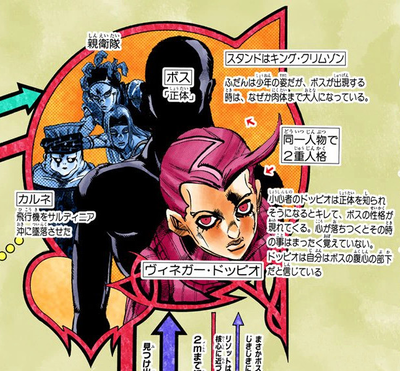 The group is first called into action when Bruno Bucciarati and his gang defect from Passione. One by one, its members attack the traitors, each for their own different reasons and motivations.

The tag-team Squalo and Tizzano begin their attack when Diavolo planned for the traitors to be killed before leaving Venice, their incentive being money and the Boss's satisfaction in them. Using Narancia Ghirga as an initially hapless victim to Tizzano's Stand, Talking Head, they slowly and discreetly get the rest of the group more vulnerable and easier to kill with Squalo's Stand, Clash. Giorno Giovanna is targeted first per the Boss's advice due to the boy's resourcefulness and his ability to heal[1]. However, Narancia and Giorno, who is able to see past the deception of Tizzano's ability, work together and the two assassins are killed by Narancia out in public.[2]

At the airport, Carne is sent to attack the whole gang, and is promptly killed by Guido Mista. His Stand, Notorious B.I.G, manifests on the gang's stolen plane and incapacitates half of the group as they cannot escape, even forcing Giorno to lose both of his hands in his attempts to rid them of their invincible foe. However, Trish awakens her Stand, Spice Girl, with indirect encouragement from Giorno, and single-handedly defeats Notorious B.I.G by sending it into the ocean where it stays in the water indefinitely.[3]

Later, the traitor group closes in on Rome, forcing Diavolo to deploy his last resort, Cioccolata and Secco. The two do not show true loyalty in Diavolo, and instead are fueled by Cioccolata's own morbid desires. When Narancia is unable to participate and Trish stays behind to tend to him, the rest of the gang is forced by the duo to split, with Mista and Giorno battling Cioccolata, and Bucciarati battling Secco. The confrontation leaves much of Rome's population dead or injured, with Giorno putting an end to Cioccolata in a helicopter, and Secco defeated by a dying Bucciarati right outside the Colosseum. With that, Diavolo decides to eliminate the traitors himself.[4]