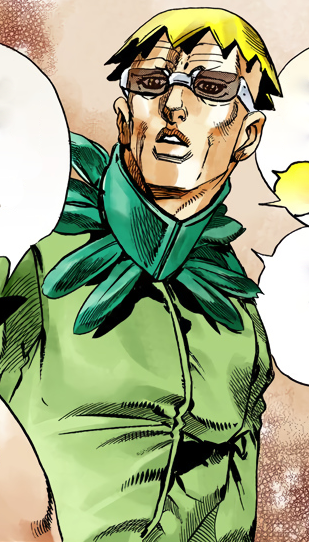 Steven Steel is a mature man standing at around 190 cm, and much like Foo Fighters, he wears a hat covering his head in a bob with serrated edges.

The series is known for alternating colors between media, the information presented below may or may not be canon.
Skin(Fair)
Hair(Blond)
Eyes(Grey)
Outfit
(Green outfit, dark green collar, brown shoes. Glasses with white temples and gray-brown lenses) 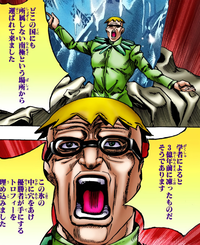 Steven Steel is shown to be an anxious character despite bearing a bold facade as the organizer and host of the Steel Ball Run race.[3] During most of his life, Steven Steel has cultivated a bombastic and eccentric persona, becoming a performer, sportsman and other jobs in the center of the stage, but would find his calling as a promoter for various events.[4] Despite the ups and downs of his career, Steven has managed to always rebound to success. Steven also projects the image of a stern and confident promoter who tackles any problem with calm and authority. When a clerk reports numerous problems during the preparations, Steven calmly raises the budget and orders to make it clear troublemakers will be thrown out.[5] Privately, Steven is full of doubts and only dreams of a modest amount of fame, being content that a paper would print his name even at the bottom of the page as long his contribution was acknowledged.[6] All these thoughts he only shares with Lucy.

Steven Steel is a romantic man holding several ideals. He notably promotes the Steel Ball Run as an apology for mankind's pioneer spirit, intending to make it so for the first time, a lone man crosses the United States with his horse and accepting all other vehicles used in the race as a challenge to this spirit. He also considers that "true failure" is to abandon this pioneer spirit and avoid hardships.[7] Steven Steel is also content with the bit of fame his events grant him[6] but doesn't seem to be after monetary gains, as he offered all of the profit from the race to various causes[8] and also refused to throw a fight during his career as a boxer, even if he was shot in the knee by gangsters. Steven also made the effort to save Lucy from the mafia as repayment for her support. 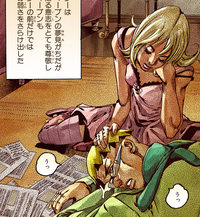 Steven and Lucy are extremely loyal to each other

Steven has a privileged and platonic relationship with his wife, Lucy. Having once fallen in love during his youth, Steven was thrown into despair by the death of his fiancé and promised to never love again.[9] True to that, despite being Lucy's husband and everyone considering her as a trophy wife for a salacious old man, Steven never touches her and considers her as his protegee.[10] As she was the first to encourage him during an all-time low in his career and he saved her from the hands of gangsters, Steven and Lucy share a great affection and trust with each other.[11] Steven is so attached to Lucy, he doesn't hesitate to risk his life to save her.[12]

Steven is a reluctant accomplice to Funny Valentine in finding the Saint Corpse Parts, having accepted to collaborate although he was unaware of the violence of the operation.[13] Although he knows about them and has a vague idea of their power, Steel remains uninterested in them during the whole race.

Promoting: Steven is a talented promoter, having to his name several bizarre events that he promoted and became popular stories with the public, which made him rich. Steven is also partly responsible for the popularity of the Steel Ball Run race. As a public relations expert, he's given inspiring speeches and arranged things so that journalists would regularly be able to observe and report the race.

Horse riding: Steven Steel is a gifted horseman. Having joined the cavalry but soon retiring from the army because of an illness, his skills would never be put to profit during his life. However, his horse riding skill becomes crucial when he comes to save Johnny, struck by his own ability, and thus shows that he can ride a horse perfectly and allows Johnny to perform another Golden Spin. 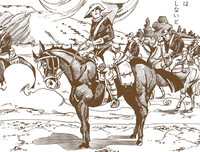 Steven in the US cavalry

Steven Steel was born in 1840 in New York to a family of Irish immigrants. His father was a blacksmith and Steven was the fourth of a family of seven children. When he was 15 he fell in love with the beautiful daughter of a florist and the two vowed to be together, but she died in a carriage accident that year. At the time, Steven fell into a deep state of despair and promised to never fall in love again. He joined the cavalry but was never sent to wars nor expeditions. He spent two years in a deserted island hospital. In the following years, he changed jobs each year until he was 28. These jobs are:

He disappeared for 13 years and then reappeared as an adventurer searching for dinosaurs in Costa Rica in 1881. Two years later, he dubbed himself a promoter, catching the attention of many newspaper outlets.[1]

One day, a scandal about a monkey disguised as an alien caused him to be dubbed a fraud, but he had nothing to do with the scandal. No one believed him and he had to sell his mansion. At his worst moment, an idea came to change his luck, "a long-distance horse ride", the one thing he wasn't able to do in the cavalry. He searched for sponsors without results. Not having eaten in days and severely drunk he sat by the edge of the street, interrupted by a young Lucy Pendleton who was listening to his mumbling.[1] 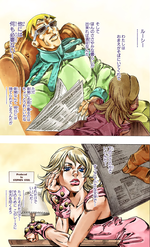 After their phony marriage, Steven & Lucy develop a strong friendship

Lucy came up with the idea of a race across the entire American continent with a winning prize of 50 million dollars. He scolds her for that idea and returned to the bar, got in a fight, and fell asleep behind the urinals. The next day, a group of people surrounded him and asked about the cross-continental race, willing to sponsor it. It is, however, hinted by Funny Valentine's comments on the Steel Ball Run being a venue to claim the Corpse Parts that he was behind Steven's sponsorship for the race.[1] Funny Valentine and Steven Steel would meet and organize the race together, Valentine notably choosing each stage of the race to uncover the Saint's Corpse while Steven Steel promoted the race to all newspapers.

Two years later, he remembered the girl who gave him his chance. When he met her again, she was grown up and identical to his first love. Steven told her father he wanted to pay his daughter back for the favor she gave him, but her father told him that he was forced to sell his daughter to a gang to be a prostitute. To protect her, Steven told her father to lie about Lucy having lost her virginity to Steven, to force the gang to give her up. After Lucy returned, she offered to marry him. Initially, Steven objected to the idea, wishing for her to grow up, marry someone her age, and live a normal life, but eventually gave in and married her. Despite this, Steven was reported by Lucy as never laying a hand on her. The two would develop a deep relationship of trust and loyalty, which remained platonic. 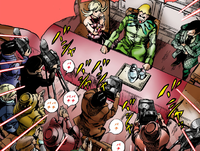 Steven at a press conference to promote the SBR

As the promoter of the Steel Ball Run race, Steven is present in San Diego to give his final presentation of the race, oversee the organization of the starting line, and welcome important observers.

During the first stage, Steven notices Gyro Zeppeli's performance and orders a background check on this mysterious participant. He learns that he arrived in America on a royal boat but doesn't learn anything afterward. However, Steven puts Gyro under watch, as a potential candidate for gathering the Corpse Parts. After the first stage, Steven is brought to a crime scene and sees the three disemboweled corpses of three racers. Not wanting to stop the race, Steven allows the sheriff to bring in Mountain Tim to investigate the matter.

During the second stage, Steven inquires about Gyro Zeppeli and if the Napolitan has a Corpse Part, which worries his assistant. Discussing with President Funny Valentine, Steel is shocked to hear him mention murdering Gyro so casually and protests about killing anyone, but he doesn't have any choice on the matter.

Steven continues to work on the race. Unbeknownst to him, Lucy also discovers the true goal of the Steel Ball Run and acts behind his back to keep the Corpse Parts out of Valentine's reach. Her operation ends when she infiltrates a presidential facility in Chicago and must disguise herself as Scarlet Valentine. Hot Pants fakes Lucy's death in order to protect her. "Lucy"'s corpse is found near the Fox River, off the shore of Lake Michigan. Steel is heartbroken for a moment but he glimpses the corpse and intuitively sees that Lucy's corpse is not genuine.

The final battles for the Saint

Steven is eventually targeted by the US government

For approximately four weeks, doubt gnaws at Steven who cannot believe it was Lucy on the shore. In Philadelphia, Steven stays in a coach and examines several photos before concluding that somehow the First Lady is Lucy. However, the agent, Magent Magent, confronts him and shoots him in the chest. Gravely wounded, Steel is then protected by Wekapipo who eventually puts Magent out of commission for good.

Steven is retrieved by the authorities and brought to Independence Hall, near Lucy. He is held captive but is not treated. Lucy manages to bring Steven outside of the compound, but it lured them to Funny Valentine's ship. Valentine nonetheless swears to Lucy that he will not kill Steven. Steven is brought alongside Lucy on the presidential train to New Jersey.

During the battle between Johnny Joestar, Gyro Zeppeli, and Funny Valentine, Steven regained consciousness and brought Lucy out of the train to save her from the effects of D4C Love Train. Gyro takes Lucy and flees to the coast. Steven's intervention only delays Valentine's plans but does give Johnny a needed reprieve from Valentine's attack. Angry at this inconvenience, Valentine slams Steven against the car and stomps on his wounds, but refrains from killing him. After Valentine's defeat, Steven is seemingly healed by Johnny Joestar. 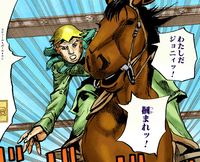 The three believe the battle to be over but Johnny notices that someone has taken the corpse. There is a last, unknown enemy to confront. Steven mentions a vault specially built under Trinity Church to store the Saint's Corpse and advises Johnny to follow the race to find the enemy. During this, he witnesses Lucy behead Diego Brando with the intent of killing the other Diego Brando. Steven reappears on the Manhattan Bridge riding a horse towards Johnny Joestar. Johnny has been hit with his own Super Spin but Steven tells him to take his arm. Steven's riding allows Johnny to shoot himself again and free himself from Tusk ACT4's infinite Spin. Steven then joins Lucy in the vault and is content with sealing the Saint's Corpse's in it, with no proprietor to claim it.

In the aftermath of the Steel Ball Run, Steven Steel is criticized for the huge loss of human lives during the race but he silences the press when he gives all the money he's won through the race to charity. What happens to Steven Steel afterward is unknown, and he later passes away.[2]

Steven Steel appears as the JOJO'S BIZARRE ADVENTURE/STEEL BALL RUN representing character for the menu guider, explaining every mode and other things to the player.

Steven Steel appears in the background of the Philadelphia Coast Stage alongside Lucy. He also appears as the menu guide for Campaign Mode.