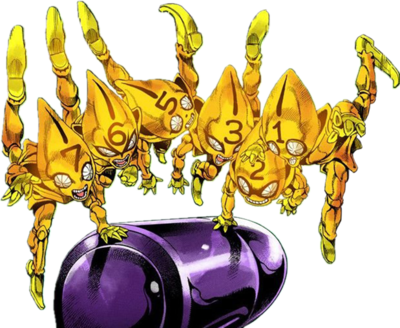 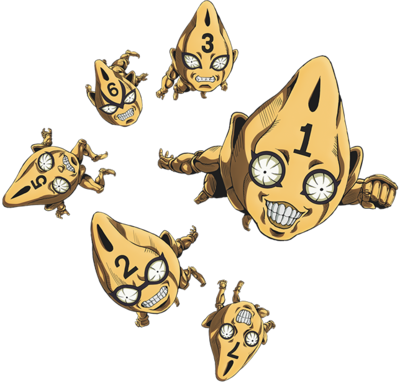 Sex Pistols is a group of six tiny stands living inside Mista's revolver. They are numbered from 1 to 7, skipping the number 4 due to it being an unlucky number according to Mista. They have teardrop-shaped heads, wide eyes with black outlines and small stripes going outward from the center, and extremely small pupils, some of which appear cross-eyed. Later on, they are depicted with more focused pupils and no radial lines in their eyes.

They have segmented bodies with pointed shoulder pads, knee pads, elbow pads and long, pointed shoes with toe caps that curve upward. Ironically, they each have four fingers instead of five on each hand and knuckle bumps. However, they have five fingers in All-Star Battle, Eyes of Heaven, and the anime. Frequently, the Pistols will open their mouths, revealing crooked teeth.

They're tiny enough to fit inside a revolver's cylinder.

Unlike most Stands, the Pistols each have distinct personalities, often interacting with each other and Mista. Despite their individuality though, they all share a childish and irreverent character; they are prone to argue, can make inappropriate comments, like to nap and will not work if they are not fed.[1] Outside of battle, Mista doesn't actually control the Pistols, who do as they please and hate the idea of being treated as pets.

During battle, they are a well coordinated group that work together and celebrate after victory. They often exclaim phrases like "PASSPASSPASS ... !" and "YEE-HAW!" when riding and passing bullets around. They commentate and assist Mista outside of redirecting the bullets, like reloading his own gun or explaining its status. When Mista is out of commission, they'll aid other members of his group.

The Pistols are by themselves very weak Stands and rely on the gun bullets they ride to participate in combat. Despite this, they are highly autonomous and have a long range (going as far as bullets can fly). This allows Mista to control the battlefield and gather information from afar thanks to the Pistols being able to spy on their enemies.[3] If need be, the Pistols can make decisions by themselves whenever the opportunity presents itself, often surprising foes as a result.

The Pistols are unusually resilient and can persist even if Mista is put in a state of near-unconsciousness or even near-death. Should this be the case, the Pistols can continue to help Mista's allies.[4]

The Pistols putting bullets into the chambers