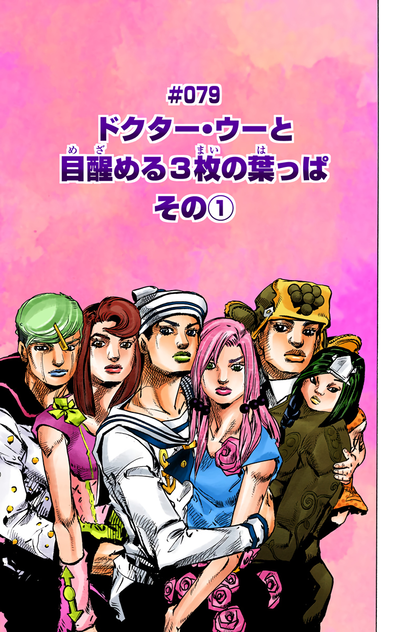 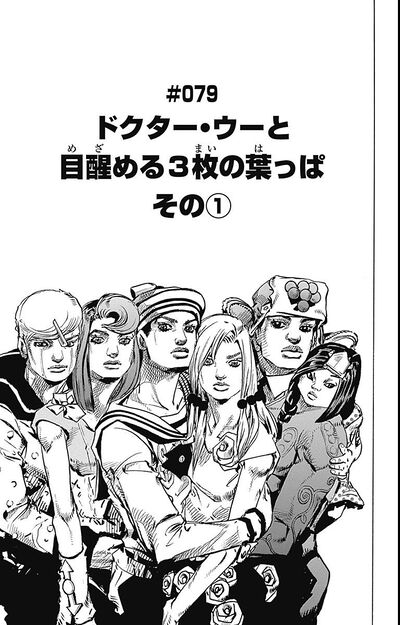 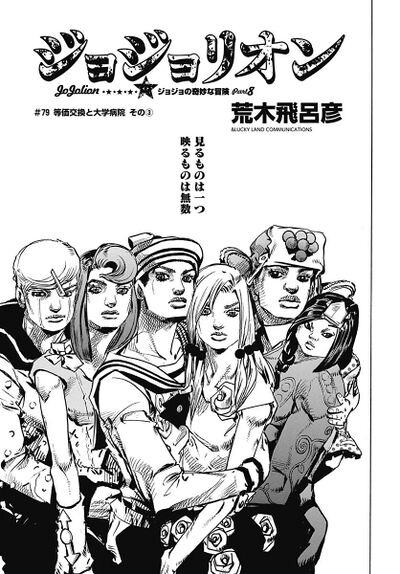 At TG University Hospital, Josuke and Mamezuku frantically search for Yasuho, sensing that she is in danger because her phone call cut off. Meanwhile, Yasuho realizes that Wu Tomoki's ability is similar to what the Hair Clip Rock Organism once did in the past, when it exploited her weakness to show an illusion of her father who then shattered away into several fragments. Yasuho notices that she can't move her body, but she looks back to see Mitsuba on top of her with an unusually heavy weight and hands covered in blisters. Yasuho yells at her to stop, asking whether Mitsuba is her enemy, before Mitsuba comes to her senses.

Extremely confused about the situation, Mitsuba questions what is going on. Yasuho explains that Mitsuba must have eaten a Locacaca fruit, but Mitsuba has no recollection of what happened, aside from paying 200 million yen for treating the "allergic reaction" on her scalp. Although Mitsuba claims that her body is now perfect, Yasuho refutes her by explaining the fruit's equivalent exchange process. She asks Mitsuba to quickly look for her cellphone as they are under attack by Wu Tomoki, who is a Rock Human. However, Yasuho is then attacked by small fragments which previously entered through her ears, but now start entering into her thighs. The same fragments are inside Mitsuba's fingers, which caused the blisters and her increased weight. Mitsuba finds Yasuho's cellphone under her, but it was already shattered to pieces from her weight. Just then, several fragments emerge from Mitsuba's fingers as if they multiplied and climb up Yasuho's legs, exploiting her weaknesses and attempting to get inside her.

Yasuho summons Paisley Park so it can travel to the MRI room through placing one hand on the hospital computer. At the same time, it places its other hand on Yasuho's face to find where the fragments invaded her body. The fragments are on the right side of her head, attempting to fuse with the bone tissue of her skull. She learns through Paisley Park that the fragments are made up of an organosilicon compound, forming bonds with oxygen to make energy. These components could potentially make up a creature different from a carbon-based life form. Before the fragments could fuse with her skull, Paisley Park grabs a syringe and stabs Yasuho in the eye, successfully extracting the pieces out.

Yasuho grabs Mitsuba's arm, explaining that they need to run away from Dr. Wu. She asserts that the goal of the rock humans isn't money, but the Locacaca's equivalent exchange itself, and that not only her but the entire Higashikata family is in danger. Dr. Wu materializes out of the fragment pieces to say that while Yasuho was mostly correct in her claims, she was also wrong. Making money is indeed one of his goals, but not all of them. He allows Yasuho to leave if she wishes, but says Mitsuba must stay because her examination is not yet complete. Mitsuba continues to question what is inside her body, but Yasuho drags her out of the room. Dr. Wu then uses the remote control to an air conditioner to scatter his fragments into the waiting room.

As the two exit the room, Josuke and Mamezuku are not far in front of them, but their backs are turned. Mitsuba explains that although she doesn't remember being in a wheelchair or everything that happened in the hospital, she has a secret she hasn't told anyone in the family, including her husband and child. She is pregnant, but since her body is completely healthy, then something else must have been taken away by Wu Tomoki during the equivalent exchange. Mitsuba reveals her Stand with a new resolve to discover what happened during her treatment.

Author's Note
“
I tried making a reservation at a famous sushi restaurant and was told it wouldn't be until the "October of the year after the Tokyo Olympics ends".
”
—Hirohiko Araki
“
ある有名なお寿司屋を予約したら「東京五輪が終わった年の10月で。」と言われた。
”
—Hirohiko Araki