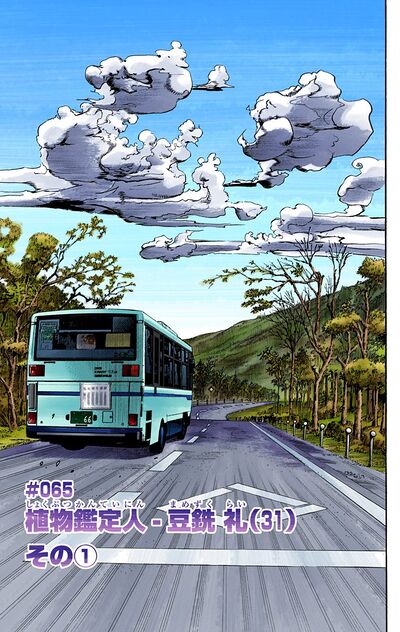 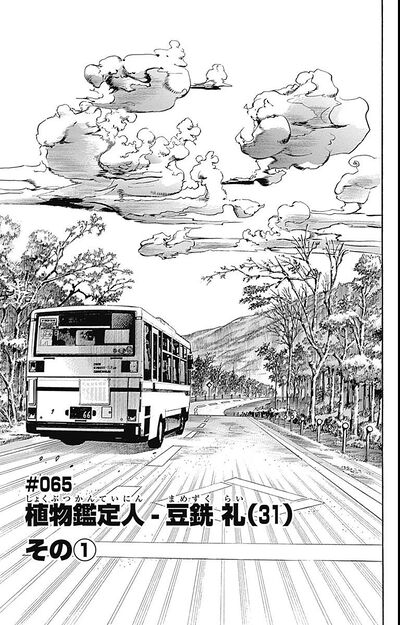 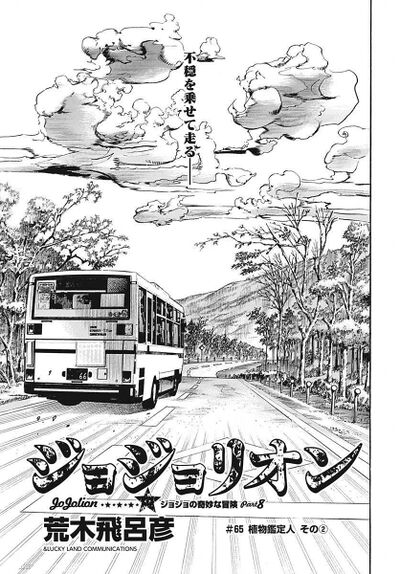 Josuke and Yasuho are surprised to see the man they are supposed to meet on the driver's seat of their bus. The plant appraiser explains that he's talked with Norisuke and inquires about Yasuho whom he doesn't know. It is too late to separate themselves from her, as the newcomer predicts the probability of her death if she returns to Morioh to be 95.5%.

As the other passengers protest about the bus jacking and begin to call for help, the plant appraiser explains that he's taken the precaution of breaking the on-board cameras and plans to leave the bus farther away in any case. Josuke asks where he is taking them, to which the appraiser explains that someone might be eavesdropping on them. Since Josuke was heard mentioning the appraiser, the latter is currently being pursued.

Although the three do not visibly appear to be trailed, the appraiser says that they are currently being followed and that his protection is the top priority. Arriving at a parking lot, the man stops the bus in the middle of the lot. He invites Josuke and Yasuho to get off despite a mentioned 7.5% chance of survival. Noticing that the passengers were videotaping the incident, he asks Josuke to steal their phones, to which Yasuho answers that her Paisley Park has already erased the information, nonchalantly exiting the bus and somewhat impressing the appraiser.

Josuke asks who the enemy is, but the appraiser himself doesn't know. He specifies that this foe has slipped their way into society and that they will not stop before they have the Locacaca. He then points at a group of trees that, strangely, are rotating and moving toward the trio, even breaking through the concrete and a bunch of rat corpses riddled with holes at their roots. The appraiser reveals that the enemy responsible for the trees has already attacked him and that is why he moved to meet up with Josuke. He then tells Josuke and Yasuho to come with him to a safer place and finally presents himself: Rai Mamezuku, 31 years old, Norisuke's personal fruit grower.

Josuke then shows the photos he's taken from the Higashikata estate and asks Mamezuku to identify the grafted branch at once. Mamezuku examines the photos and successfully identifies the branch, but doesn't reveal which one it is because the situation is more complex than Josuke thinks. Their enemy cannot find the branch and certainly cannot grow it as the fragile branches would wilt after any trauma; thus, Mamezuku is one of their targets too. Josuke apologizes for his mistake.

The three then take a chairlift up the mountain, and Yasuho asks what is at the top of the lift. To her and Josuke's surprise, Mamezuku stops the ascension when they reach a particular pole. Mamezuku leaves the chair and climbs the pole, revealing a whole kitchen crammed inside the pole, with the deployed exterior serving as a makeshift table. Mamezuku reveals a parasol and air cushions to make the couple comfortable and begins to cook. Describing his recipe in detail, Mamezuku begins to make a mix of mascarpone cheese and egg yolk inside a bowl A, then makes whipped cream in a plate B. He subsequently mixes the two ingredients and then in a bowl C, makes a meringue out of the egg white and sugar. Finally, Mamezuku mixes the meringue with the mixture from A and B to make a Romanoff cream.

Flabbergasted, Josuke and Yasuho understand that Mamezuku literally lives in the chairlift and that it is the aforementioned "safe place" he's taken them to. Mamezuku doesn't mind their reaction and explains that although he will find the Locacaca branch, the problem is harvesting the fruits. He says the way of doing it is up in the mountains and prepares to show them a demonstration. As a final touch to his Romanoff, Mamezuku reveals his Stand and grows strings in order to catch some strawberries to complete his dish. He explains that the entire mountainside is his orchard and invites his guests to eat up as they discuss what to do next.