Dawn of the Higashikata Family 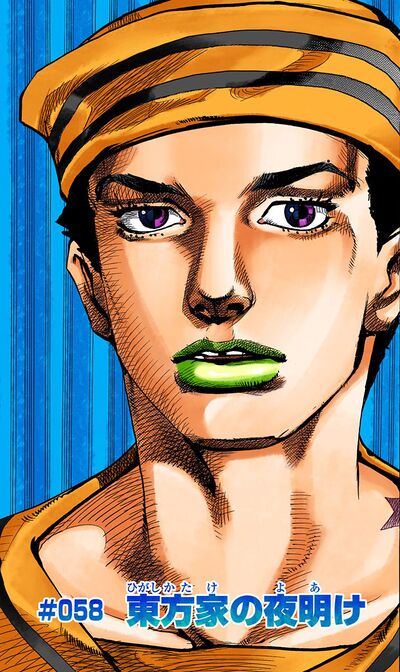 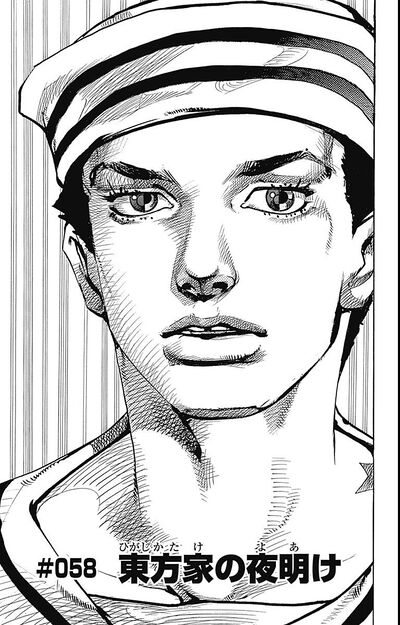 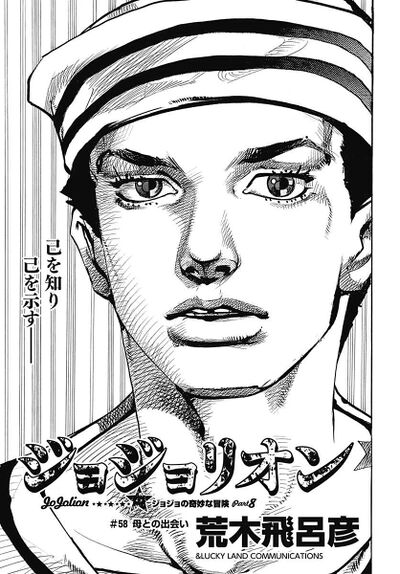 Dawn of the Higashikata Family (東方家の夜明け, Higashikata-ke no Yoake), originally titled Meeting the Mother (母との出会い, Haha to no Deai) in the UJ release, is the fifty-eighth chapter of JoJolion and the nine hundred fifth chapter of the JoJo's Bizarre Adventure manga.

At the Damokan cleaning station, Josuke recalls that his identity is a mix of Josefumi Kujo and Yoshikage Kira. Moreover, Josuke shifts his attention on the Locacaca, the fruit at the origin of his creation.

At the Morioh University Hospital, Josuke sees Holy, unconscious and strapped to her bed, and more worryingly, put into a dusty room in a neglected aisle of the hospital. He accosts a doctor, outraged by the living conditions of Holy. When the doctors asks him if he is a relative, Josuke confirms that he is Holy's son. At this answer, the doctor then explains that no one has paid her medical expenses since August which her insurances didn't cover. The doctor adds that Holy's condition took a turn for the worse as she began to hallucinate her fingers as food and ate six of them, forcing the doctors to strap her and sedate her. Finally her treatment only delayed the progress of her illness, and until someone pays the fees amounting to 120,000 yen per night, the hospital won't resume her treatment. Observing Holy, Josuke is overcome by sadness, recognizing her as his mother and sorry for her state. Still crying, Josuke promises to the doctor that the fees will be paid. Josuke then promises himself to go find the Locacaca to cure her.

At the Higashikata's, Josuke has returned and Norisuke begins his morning breathing exercises while Daiya leaves a DVD box on the couch. Daiya mentions the DVD, which is from the exercise guru Miki Ryousuke, and Norisuke goes pick it up, Kaato finally giving it to him. It takes a while for everyone to properly register that a strange woman is sitting on their couch, but when Norisuke understands the situation, he panics and trips away from Kaato. Kaato, berating Norisuke for having never mentioned her, comments on how Daiya, Joshu and Hato have grown, exposing herself as their mother. Norisuke rebukes Kaato, saying that Kaato should have called to tell him that she was freed, but Kaato justifies herself that she wanted to see her children as soon as possible after 15 years in prison. Finally, Hato explains that she murdered a child. Unfazed by the revelation of her crime, Kaato demands that she has compensation for her time in prison. Daiya, curious about Kaato, is told by her mother to come hug her, but Joshu pushes a chair and makes Kaato trip. Joshu then begins to antagonize Kaato, then tricks her into undressing herself, exposing his skepticism about Kaato's relationship with the family. Kaato's cards fall over, causing a curious Joshu to pick them up, but a chair suddenly appears from one of them, impaling Joshu in the jaw. Furious, Kaato scolds Joshu for underestimating her and is outraged that her love for her family isn't returned. Kaato leaves offended while Jobin enters the family room and nonchalantly reveals that he was the one to let her in. While Jobin examines his breakfast, Norisuke is worried about what Jobin could be up to.

Author's Note
“
I designed an illustration for the Kumano Hongū Taisha amulet that will be distributed starting on September 22.
”
—Hirohiko Araki
“
9月22日から頒布される熊野本宮大社のお守りのイラストデザインを致しました。
”
—Hirohiko Araki