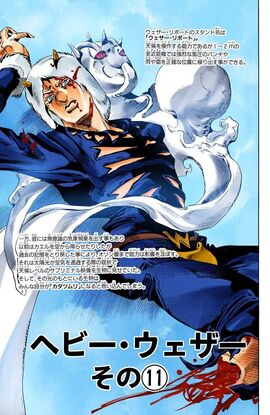 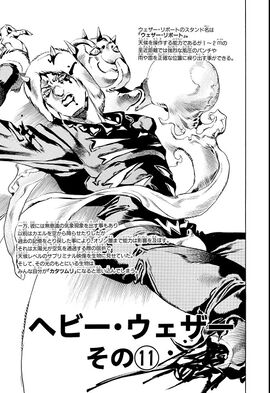 Continuing his speech about the power of subliminal message and the influence the mind can have on the body, Pucci declares his unchallenged victory against Anasui and Weather. Pucci cuts off Weather's remaining leg, shocking Anasui who attacks the priest. Angry, Pucci punches Anasui with Whitesnake and almost finishes him off. However, Pucci suddenly impales his foot on an ice spike, and finds himself unable to move without risking impalement. Weather used his Stand to freeze his blood which has splattered all over the place and trap Pucci in a maze of spikes, cornering him. Weather crawls toward Pucci to attack him while he's immobilized, but Pucci plunges Whitesnake's hand into Anasui's head to brainwash him, forcing him to reveal the positions of the spikes and escape. However, Anasui notices too late that a spike has formed on Pucci's chest, menacing to impale the latter's head. Weather has now managed to get into striking range.