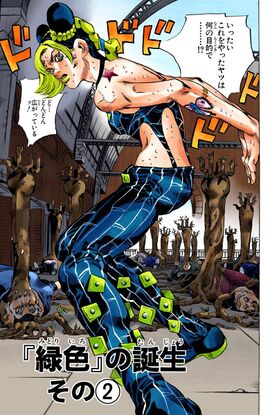 After F.F. and Jolyne recover from the battle, Anasui secretly tells F.F. to make Jolyne trip in order to make her fall into his arms. However, before Anasui could catch her, Jolyne spots the prisoner who had DIO's Bone in his possession. The trio attempts to corner the man, but he soon grotesquely transforms into a plant. The man mutters about the sun giving him energy before his bodies bursts due to a flower blooming in him. Every corpse in the punishment ward suddenly blossoms in the same way.

As Jolyne approaches all of the corpses, Anasui notices the buds blooming on her face and stops her in her tracks. However, they disappear when she turns around, even after Anasui inspects her closer. He then deduces that the corpses turned into plants not because of a Stand, but because of the bone, and Jolyne may have been infected because she had attacked the man earlier with her string.

D an G watches from afar as the roots of the plants carry the bone away. Jolyne runs off to take it, but buds of flowers bloom on her body. Anasui uses Diver Down to get rid most of plants on her face but cannot take off the others as they had already become a part of her. He also notes that the plants will only grow under sunlight. The trio sees the Bone fusing with the plants on the corpses and develops into an embryo bearing the Joestar birthmark.