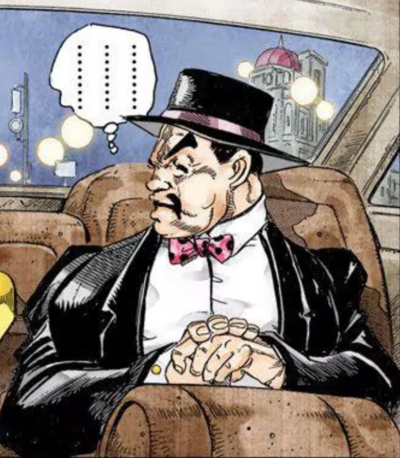 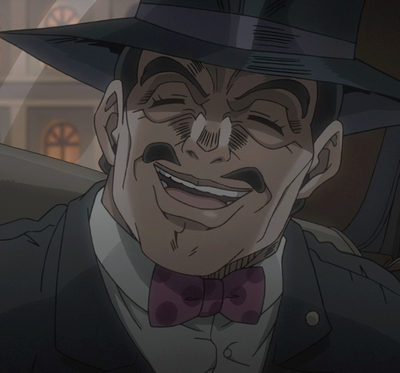 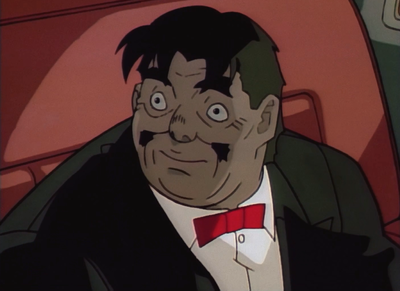 JoJo's Bizarre Adventure (PS1 Game) (JOJO POKE)
SPOILER WARNING: Part 3 spoiler details may follow.
“
I have a villa on a thousand acres in Hawaii! I married a beautiful model who's 25 years younger than me! I pay 50 times more in taxes than ordinary people! I've defeated every enemy that I've faced. I'll eventually become president. I am Senator Philips!
”
—Wilson Philips' monologue during his encounter with Dio, Chapter 251: DIO's World, Part 5

Wilson Phillips is a short, rotund, middle-aged man sporting a mustache consisting of two small whiskers on each side. Phillips wears a two-piece dark suit with a bright polka-dot bow tie and a trilby that hides short, dark hair. He loses his two central incisors from his upper jaw after DIO pulls them out.[4] 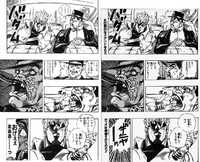 During the Weekly Shonen Jump serialisation of Part 3, Wilson Phillips acts surprised and entitled as soon as DIO enters his car. However, in the tankobon release, this scene was heavily changed to make him initially appear more humble and carefree towards DIO.[6]

Wilson Phillips' uncredited English voice actor in the Stardust Crusaders OVA, Charles Martinet, is well known for being the voice of Mario, Luigi, Wario and Waluigi and various other characters in the Super Mario series.

Wilson Phillips appears as part of the stage hazard in the Cairo Streets stage. After one of the combatants gets thrown in the hazard indication area, Wilson appears and slowly walks away, and later he appears insanely driving the car, hitting anyone near its trajectory, following DIO's orders (much like he did on the story events). This occurs in its entirety even if DIO is one of the combatants.