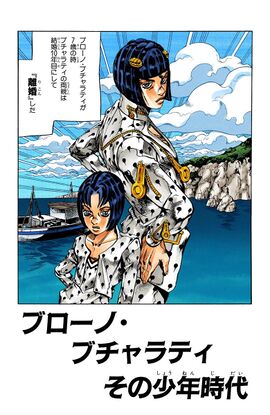 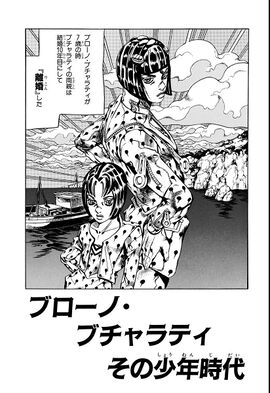 A flashback reveals Bruno Bucciarati's past. At 7 years old, Bucciarati had to decide between living with his mother or his father who divorced. Bucciarati chose to remain with his father, who he knew suffered most from the divorce. His mother understood Bucciarati's intention and was proud of her son, even though they would soon part and only see each other at Christmas.

When Bucciarati was 12, his father brought two suspicious men on an isolated beach and witnessed a drug deal. Shot and left for dead, Bucciarati's father was nonetheless brought to the hospital. The two drug dealers decided to finish him off, but Bucciarati killed them both. Now having to seek protection, Bucciarati enlisted in Passione who he believed was fighting against the proliferation of drugs. But soon, Passione's own drug trafficking drove Bucciarati apart from the organization. His father also died 5 years later from his wounds.

Witnessing The Boss's own deprivation throws Bucciarati in a rage and he decides to openly revolt against him. He opens a zipper and sees the Boss carrying an unconscious Trish away down the elevator shaft. Bucciarati goes after him, determined to kill him.