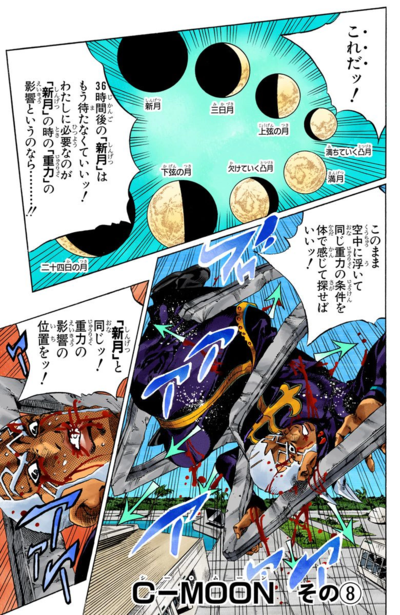 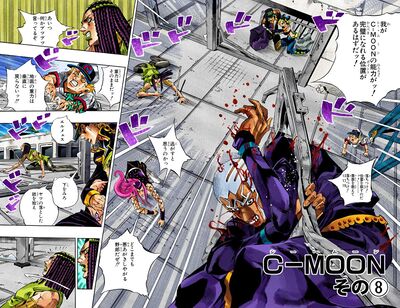 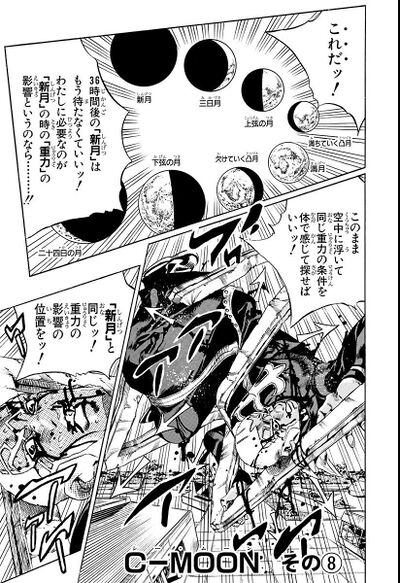 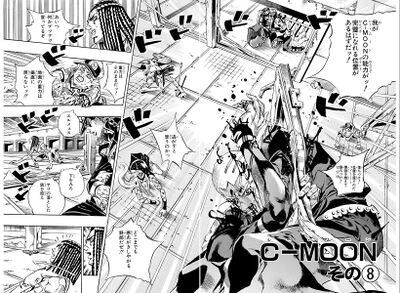 C-Moon, Part 8 ( その⑧, Shī Mūn Sono 8), originally The Position (位置, Ichi) in the WSJ release, is the one hundred forty-eighth chapter of Stone Ocean and the seven hundred forty-second chapter of the JoJo's Bizarre Adventure manga.

Pucci is now searching for the exact gravitation effect that will grant him the power to reach Heaven, floating away nervously. While every member of the group looks at Pucci, Jotaro takes a moment to congratulate his daughter Jolyne. He then tells Ermes to pick up the gun and fire at the priest. Ermes obeys, and Pucci summons C-Moon to deflect the bullets. At this moment, Jotaro stops time; he then throws the spear he used earlier, thinking that Pucci won't see the fatal blow coming to him.

Yet at the last second, Pucci turns his eyes for a moment within the stopped time.

Jotaro, too shocked to react, cannot maintain his timestop anymore. Pucci not only deflects the bullets, but moves his head, barely avoiding the spear which tears off an ear. The momentum of the spear still throws Pucci further away, who lands on the shuttle on display at the center. Pucci is now very close to the optimal position, and his body begins to break down into light. Thinking about how in the end, the Joestar Family fatefully aided him, he prays one last time before the light engulfs him. Anasui, who managed to catch up to Pucci, throws a punch with Diver Down, but its arms disintegrates itself, and from it springs a brand new Stand.