Man in the Mirror and Purple Haze (story arc)

Man in the Mirror and Purple Haze 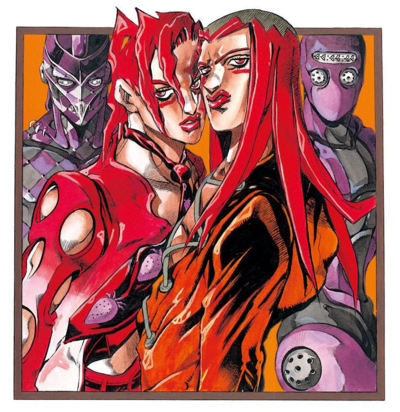 Man in the Mirror and Purple Haze (マン・イン・ザ・ミラーとパープル・ヘイズ, Man In Za Mirā to Pāpuru Heizu) is the ninth story arc in Vento Aureo.

It narrates the struggle of Giorno, Abbacchio, and Fugo to secure a key in Pompeii as the assassin Illuso assaults them from inside a mirror world.

The three arrive at Pompeii, but Fugo spots someone in a mirror hanging on a wall.[1] Fugo alerts Giorno and Abbacchio of his presence behind a nearby pillar, but they are unable to see him. As the man in the mirror prepares to attack, Fugo pushes Giorno and Abbacchio out of his way, only to see them disappear in front of him. When the mysterious man, Illuso, appears in front of him, Fugo realizes that he's been dragged into the mirror.[2] Fugo summons his Stand, Purple Haze, but it materializes in the real world instead of the mirror world. Illuso gloats about Fugo's inability to fight back before pummeling him within an inch of his life.

Meanwhile, in the real world, Abbacchio warns Giorno of the danger of Purple Haze: the Stand's ability releases a deadly virus, which can melt an organism within a minute.[3] Despite Giorno's conviction that finding a way to save Fugo will ensure the group's safety, Abbacchio chooses to prioritize the mission over Fugo's life and runs toward the dog mosaic.[4] As Abbacchio inspects the mosaic, he sees Illuso in a mirror; Illuso manages to pull Abbacchio's figure in, only to find that Moody Blues has taken Abbacchio's form via its replay ability. Moody Blues attacks Illuso, who uses a mirror shard to pull the real Abbacchio into the mirror.[5] By keeping only half of Abbacchio and Moody Blues in the mirror world, Illuso nearly immobilizes both; nevertheless, Abbacchio is able to cut off his own hand and use its replay to deliver the key to Giorno. Illuso pulls Giorno into the mirror world, but notices too late that he has infected himself with Purple Haze's virus.[6]

A flashback details Abbacchio's past. Leone Abbacchio became a cop after graduation out of his desire to protect people. Realizing that the police were corrupt and full of contradictions, Abbacchio eventually gave in and accepted a bribe from a thug. Later, when Abbacchio and his partner investigated a robbery, Abbacchio found that the same thug was behind the robbery. The thug blackmailed Abbacchio into lowering his gun, then pulled out his own gun to shoot; however, Abbacchio's partner took the bullet for him as he fatally shot the thug. Abbacchio was discharged for taking a bribe, and the guilt he felt for his partner's death numbed his emotions.

Illuso exits the mirror world, leaving his infected arm behind. However, Giorno uses Gold Experience to transform one of the bricks in the real world into a snake, allowing Fugo to locate Illuso by looking at the moving brick. Illuso notices Gold Experience too late, as Purple Haze grabs him by the neck.[7] Despite stopping the Stand's fist with Man in the Mirror, Purple Haze shoots a capsule from his hand, infecting Illuso before killing him with a barrage of punches.

Illuso's death eliminates Man in the Mirror's power, returning the group to the real world. Noting that the snake was created within the range of Purple Haze's virus, Giorno extracts the snake's blood with Gold Experience and injects it into himself, creating an antidote that renders him immune to the virus. Fugo retrieves the key as Abbacchio swears revenge against Giorno.[8]