In every volume of JoJo's Bizarre Adventure, the front folded flap of the dust jacket usually contains a picture of Hirohiko Araki himself, and more than often a note to the reader. The quotes are always different from each other, and are usually about Araki expressing his opinion on certain subjects. These subjects can be about anything, including information about characters or the story itself. The following notes and pictures below are from the volumes of Stone Ocean. 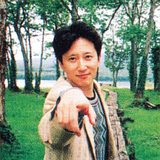 “
The protagonist of JoJo Part 6 is a woman. Why a "woman"? Therein lies the problem.

Since she's a JoJo protagonist, she's gotta be tough enough to not get disheartened even if she gets punched in the face. Sometimes she might be crawling through a ditch, or she might be falling from the top of a building with her legs wide open. It's a bit of a tight setup for a women.

But thinking about the differences in contrast, it actually seemed very interesting. Furthermore, she could be a person with great humanity like the Virgin Mary. I felt I just had to make the protagonist a woman.
”
—Hirohiko Araki
Author's Note: Special Thanks
“
I'm using this page to offer my thanks to the people who helped me with the realization of this volume.
Mr. Takashi Mizutani, attorney, who graciously offered his time to teach me the differences between Japanese and American Laws. Jeff Friend and Yoko Friend, his wife, Japanese translators who lived in New York and Miami, FL. L.T. Alhandro, director of the Turner Guilford Knight Correctional Center.
Of course, if you find a single wrong fact in this volume, these people shouldn't be blamed. I assume the entire responsibility of the content of this volume as the author.
”
—Hirohiko Araki 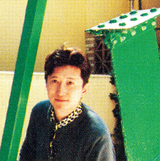 Last year, I contracted gastritis, I was told that it was caused by stress. At the time, I had heard the European saying, "A house that grows tomatoes never gets ill," and I said, "Oh, really?...then I'll grow some myself," and so I decided to grow tomatoes with that in mind. I bought a flowerpot (2,300 yen), fertilizer and dirt (about 1,000 yen) and a stake (200 yen). I planted three tomato seedlings (140 yen), making for a total of 10,920 yen. If I harvest ten tomatoes, how much would one of them yield?

(To be continued)
”
—Hirohiko Araki 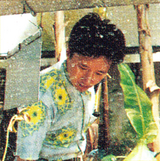 “
Observation of the nature surrounding us, N°5

The foot of the "nameko" mushroom is very long, like a stem, it is said to be delicious too. However the majority of the people find it ugly; shopkeepers are forced to cut them or else they don't sell. As for me I've decided that my tomatoes would have a real tomato "smell". Nowadays farmers manage to produce odorless tomatoes, because a lot of consumers find the smell "disgusting". Did you know that?

Besides, I have a feeling that the same practice happens in the world of manga. Be careful.
”
—Hirohiko Araki 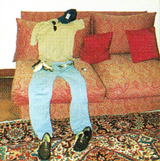 “
About my lack of sleep. It seems that genetic code determines how much time a person needs to sleep. But recently, a strange event happened. Until six months before, I didn't have a clear mind without my eight hours of sleep, but lately, I've noticed that three or four hours were enough and that I didn't want to sleep for eight hours anymore even though I knew it was bad for my health. What caused this transformation? My change of diet? My pillow? This is a complete mystery.
”
—Hirohiko Araki 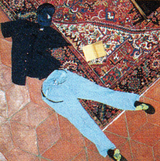 “
When I had a talk with the director of the Miami prison in Florida, for personal documentation, I asked him if the reasons for incarceration were different between men and women. Indeed I had the impression men were imprisoned for more terrible reasons than women. He answered: "It's the same, man or woman it doesn't matter. There are as many murderers and rapists from either gender."
”
—Hirohiko Araki 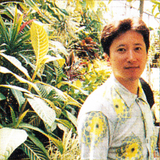 “
Let's talk about my youth. When I was in primary school, I had a friend who was stupid. One day, as we were playing, he sat on a flowerbed, more precisely on some cacti whose thorns were so tiny we couldn't see them with the eye. His shorts was covered in thorns. Immediately he shouted, grabbed his behind, and began to cry as he stroked it, covering his hands in tiny thorns. Even if I told him that the thorns were invisible but still there, he compulsively licked his hands anyways. I think we didn't stay friends for long.
”
—Hirohiko Araki 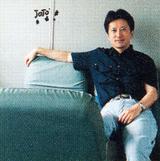 It looks like practically everyone owns one these days. Personally I don't own any. Don't go thinking that it's about entertaining a difference between me and my fellow man, it's simply that I don't need one.

Firstly, my work makes it so that I'm always stuck in my studio. Secondly, I don't want people to be able to call me anywhere and whenever they feel like it, above all if it's to tell me banalities. I'll admit that it certainly would be useful to inform someone with whom I have a meeting that I'll be late though...(to be continued)
”
—Hirohiko Araki 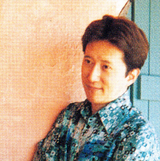 “
What kind of person am I, to not need cell phones in our period? I must acknowledge that it is very handy in case I'm late. Certainly if the person who is waiting for me has a cell phone, I can inform them on the way from a public booth.

On the other hand, when that person is late, they have no way to contact me. Which allows me, who cannot wait for more than fifteen minutes, to peacefully go home immediately. Anyway, it's the late person who's bothered the most.

Which would mean that people like me who don't own cell phones are selfish. I hope you're not angry at me, right?
”
—Hirohiko Araki 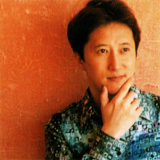 “
How to draw a manga without tiring yourself out ?

In a nutshell, I must say that if such a trick exists, I want to know it. It's necessary that I find a way not to tire myself out so much when I'm drawing from now on. In that respect let me tell you here the experience I've lived. During a seitai seance, I had noticed that I've abnormally developed the posterior muscles of my right arm.

Meaning that by using my pencil on the pages day after day for hours, I've subconsciously trained the muscles of my right arm. The problem is that I've only trained those, which isn't good...
”
—Hirohiko Araki 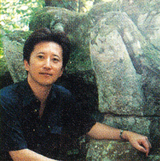 “
The first thought to cross my mind is that I must work out the left arm, but it's not easy for a mangaka who by drawing only works his right arm out for hours. You won't believe it but becoming left-handed for my everyday life is the only solution I've found. And here I am, lifting my towel, my umbrella, my toothbrush, my coffee mug, my TV remote, and my chopsticks with the left hand. I hope that I'll correctly train the muscles of my left arm. But there's another way not to suffer fatigue too much...
”
—Hirohiko Araki 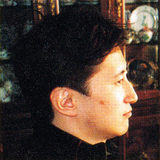 “
"How do you stop tiring yourself out when drawing?" "When you're drawing the small parts, don't go too much into the details!" Yes, I keep repeating that to myself before letting the pencil run on the page again, but it's just like that, I cannot help it. I know that the damage that this kind of person suffers is huge, and my sigh is like the deep breath a sportsman takes before a long run on the field... But I suppose I'm the only one who takes this so seriously...
”
—Hirohiko Araki 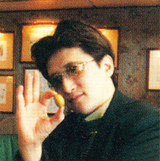 “
In order to gather some documentation I went to the city called Orlando, Florida. It is a strange city, unique in the world, which has numerous theme parks. In short, I'd say that it is a city where some hopes and dreams have taken form. Everything here seems to have been thought, built, ordered to make visitors happy, up to the green spaces and the lakes. Personally this kind of place kinda makes me anxious but not this time. If you know how to stay calm, it is a very relaxing place in fact...
”
—Hirohiko Araki 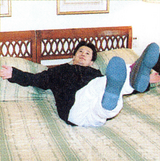 According to my mother's account, I was said to have super powers when I was little (which isn't the case anymore). What kind of super powers you ask?

Well for instance, in the waiting room of the hospital, I suddenly disappeared into the shadow of the couch. And then my mother asked "What's up with this idiot?", and a doctor in his blouse would come. Apparently I hated doctors so much that I had the power to sense when someone was approaching (I could predict his arrival in some way). Unbelievable, right? I had a predisposition allowing me to detect doctors!
”
—Hirohiko Araki 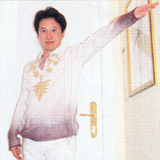 “
About Super Powers, Part 2
The other day I bought five CDs. The musical genre went from Jazz to Rock, and R&B, all from different artists. However, when I read the text on the albums, I noticed that the producer was always the same. A guy named "Antonio L.A. Reid". What were the chances that I'd took these five CDs? It made me think about the same kind of miracle which would result in a royal straight flush at poker or winning the lottery.
A divine revelation you could say.
”
—Hirohiko Araki 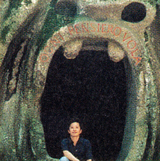 “
About cute faces.
Aiko-sama is pretty. By dint of seeing her on TV, I ended called her "The Cutie"! At the Louvres Museum, I find the portrait of the "Infante Marie Marguerite" from Velasquez prettier than the Joconde. So cute I'd cry.

The little girl drawn by the painter Yoshitomo Nara also makes me want to kiss her like a touched idiot.

But if the three people I find cute have a common point, I sure can't find it. They don't even look like each other!
”
—Hirohiko Araki 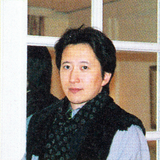 “
The editors-in-chief generally only work during the afternoon. Twenty years ago, I brought my script to the Shueisha building in the middle of the morning and I showed it to the only person who was working at that hour. This person is the very first editor-in-chief of "JoJo's Bizarre Adventure" and their impressions and suggestions are very important to me. If I went there during the afternoon and met another editor, I would have produced a very different work. Destiny isn't founded on chance, it has its reasons. In "JoJo's", it's on that point of view that one bases themselves. It doesn't have much sense scientifically, but this is how I feel.
”
—Hirohiko Araki 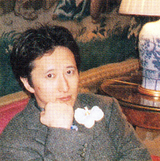 “
It's difficult to explain, but when I'm drawing I feel the existence of what I call "gravity".

In other words, while you might think that as an author I have utter control over the actions of the main characters by the progression of the story, or the world in which I make them live, it's not always like this, and at some moments it is the characters who act against my will. Through this method, some drawings have come out that I didn't want to make in the first place. That is how "gravity" manifests itself, which I also assimilate to "fate".

When you read this last volume of Stone Ocean, I'd like you to think a little about this.
”
—Hirohiko Araki