The Mystery of King Crimson, Part 1 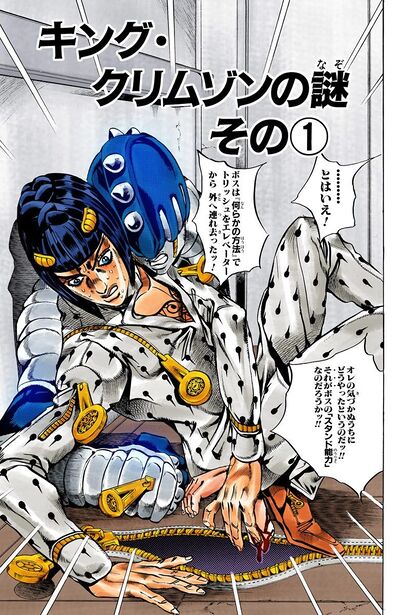 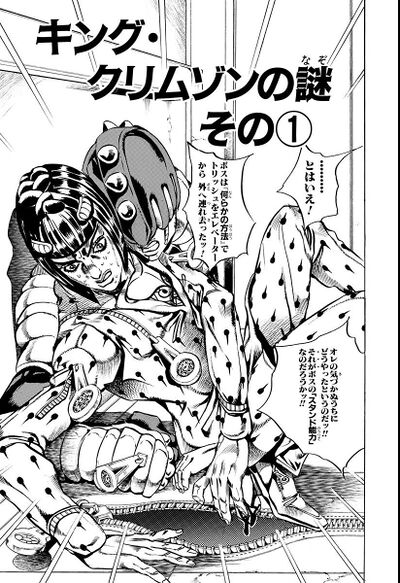 The Mystery of King Crimson, Part 1 (キング・クリムゾンの謎 その①, Kingu Kurimuzon no Nazo Sono 1), originally Assassination! (暗殺！, Ansatsu!) in the WSJ release, is the seventy-ninth chapter of Vento Aureo and the five hundred eighteenth chapter of the JoJo's Bizarre Adventure manga.

Seeing The Boss exit the elevator shaft, Bucciarati goes down, wondering what sort of power could allow The Boss to take Trish from him without noticing. Discovering a secret passage leading underground, Bucciarati chooses to get ahead of The Boss and ambush him in the crypt underneath the church. However, the Boss speaks directly to Bucciarati when approaching, warning him not to make another move.

Bucciarati attacks, but The Boss's Stand grabs Sticky Fingers' arm from behind the column. This prompts Bucciarati to cut the columns apart, but notices that both the Boss and his Stand have disappeared. The Boss begins to ask Bucciarati why he is rebelling, wondering if the latter seeks to overthrow him. Bucciarati grabs Trish and answers that he will never understand.

Bucciarati takes a mobile phone of out his jaw, and phones Giorno, who reveals him that the brooch, which fell down the elevator shaft, attached itself to the Boss. Giorno tells Bucciarati that the Boss is hiding right behind the column near him, and the lieutenant confidently cuts it apart with his zipper to attack the Boss.