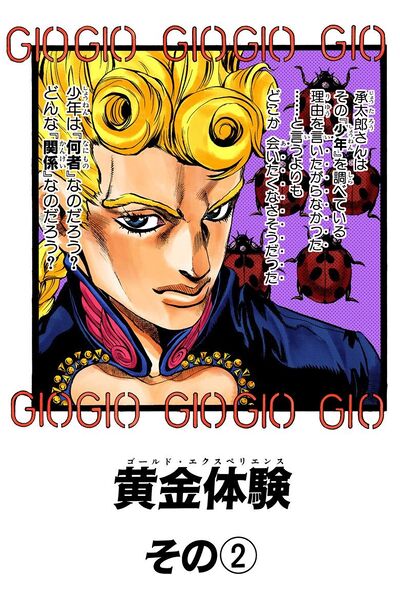 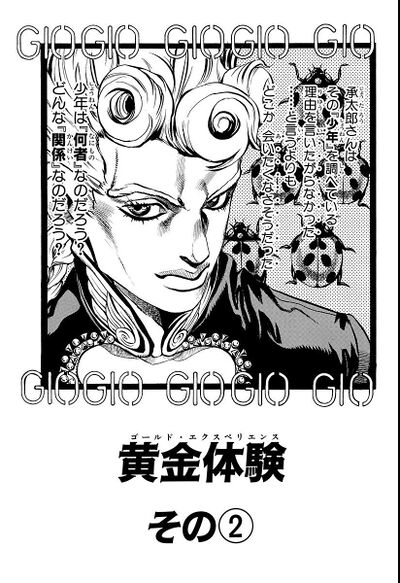 A frog appears where Koichi's luggage had been, causing him to consider the idea that Giorno is the same person that Jotaro had sent him to look for and a Stand User. Just then, the frog jumps onto Koichi's hand, startling him. However, the frog's physical touch allows him to conclude that the frog is indeed a living thing and not a Stand. He allows the frog to hop away, meanwhile sending out ACT1 to search for Giorno and his luggage.

On his way from the airport, Giorno is confronted by a shady individual wielding a shovel, knowing him to be Leaky-eye Luca, a man who's right eye constantly tears due to a knife wound from a past fight. Luca tells Giorno to sit down, and introduces the three don'ts for establishing a good friendship: don't lie, don't bear grudges, and don't forget to be respectful. Wanting to get to the point, Giorno asks if Luca wanted something, to which Luca responds suddenly angrily, thrusting his shovel's handle beneath Giorno's jaw and commanding him to be quiet as himself speaks. He points out the 'part-time work' at the airport that Giorno had been doing recently, and asks the youth for a "gift of respect", demanding to see his wallet. Giorno refuses, claiming he'd already paid the airport security for protection. Despite this, Luca grabs what he believes to be the wallet himself. However, what he finds is only a presumed picture holder, containing a picture and name of DIO inside it. Annoyed, he again demands for Giorno's wallet, but again, Giorno says he has no money, becoming increasingly annoyed himself at the futileness of repeating oneself. Luca doesn't take kindly to this, and strikes at Giorno with his shovel, who dodges effortlessly.

At the same time, the frog which Koichi had seen appears out of a nearby drain and onto Giorno's leg. Luca demands Giorno to swat it off, but he protests in how the creature is innocent – living with its own ability to think for itself. Ignoring Giorno's words, Luca hits the frog with his shovel. What he didn't know is that any damage to the frog would reflect back to the assaulter (courtesy of one of Gold Experience's abilities), and his head is shown with a large, shovel-shaped dent. Giorno explains the frog's ability, revealing a star-shaped birthmark on his left shoulder as the frog transforms back into Koichi's luggage. He again announces his distaste of repeating things, calling it useless repeatedly as he walks away from Luca's frozen body. Elsewhere, Koichi sadly confirms that he's lost his luggage.