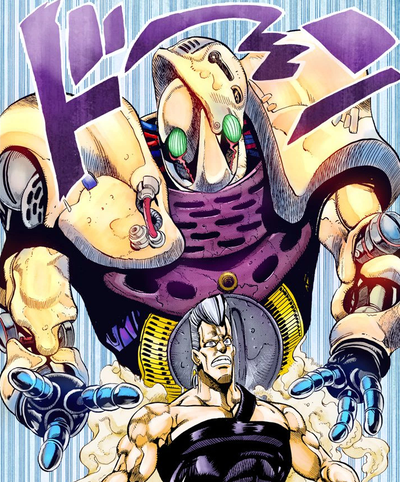 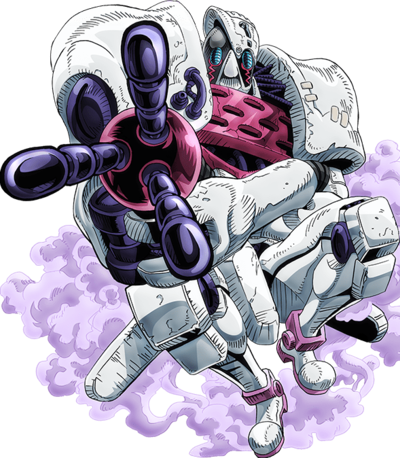 Judgement (ジャッジメント（審判）, Jajjimento) is the Stand of Cameo, featured in the third part of the JoJo's Bizarre Adventure series, Stardust Crusaders.

Judgement is a burly mechanical humanoid Stand whose ability is to sculpt fakes out of dirt, "granting" wishes by creating things that its victims ask for.

Judgement appears as a large, mechanical humanoid robot. Barrel-chested, it wears massive shoulder pads and has three fingers of a metallic sheen on its hands. A piece in the shape of a round helmet sits atop the left side of its head.

Cameo speaks through Judgement, pretending to be a kind Genie and goads Polnareff into activating its ability.[1] However, it soon reveals its true plan and exposes its pleasure at turning the wishes of his victim against themselves.[2] Judgement often shouts "Hail 2 U!", after granting a wish, and as a battle cry.[1]

The Stand represents the tarot card, Judgement, which symbolizes rebirth and self-reflection. The Stand's nature is also consistent with the card's symbolism in reverse: casting doubt and deceiving people into making poor decisions. 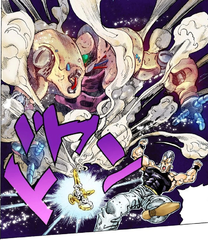 Judgement appearing from a lamp as would a genie

Judgement is a fairly powerful Stand, having above average strength and speed as far as Stands go. It was able to clash with Silver Chariot and come out without a scratch.[1] Its large metal body is particularly hard to damage. However, it yields against more brute-force Stands like Magician's Red[3] and relies on tricking unwitting victims to use their wish against them. Despite its physical prowess, it doesn't involve itself in direct combat. Instead, it tricks its targets and kills them via the clay dolls it creates.

Judgement's primary power is to grant wishes to those who ask of it. It creates clay constructs of whatever the wisher asks for.[4] These clay constructs are nearly perfect to the original, such as fake gold coins having a weight, look and feel similar to actual gold.[1] The clay human dolls also copy the appearance, voice and memories of the real person they are impersonating with near perfection, although the dolls Polnareff saw also had a monstrous right side of the face.[4]

Judgement either uses its clay constructs to trick gullible targets into trusting it but also to attack them while they find themselves unable to fight back. This is a representation of Judgement's power; to toy with a person's heart, or to directly harm them. Thus, it tricked Jean Pierre Polnareff into wishing for his sister Sherry to come back to life and then used its emotional power to form a copy of her out of dirt. However, Clone Sherry (who appeared monstrous due to Judgement changing her appearence) tried to devour Polnareff, who couldn't muster the strength to hurt his sister's figure.[2] It later pulled a similar trick by creating a clay clone of Muhammad Avdol who acted the same way, also exploiting Polnareff's guilt about Avdol's apparent demise so that Polnareff would feel like he was being punished.

Judgement's design and ability were inspired by several other works. Judgement's design is inspired by Android Kikaider and Kamen Rider by Shotaro Ishinomori, while its ability to grant wishes was inspired by the classic tale of Aladdin and the Magic Lamp.[5] The notation for Judgement's catchphrase, "HAIL 2 U", is styled after the names of Prince's songs, "Nothing Compares 2 U" and "I Would Die 4 U".[6]