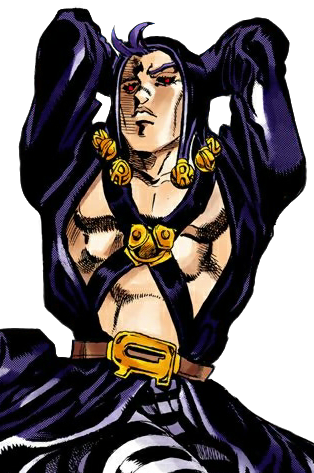 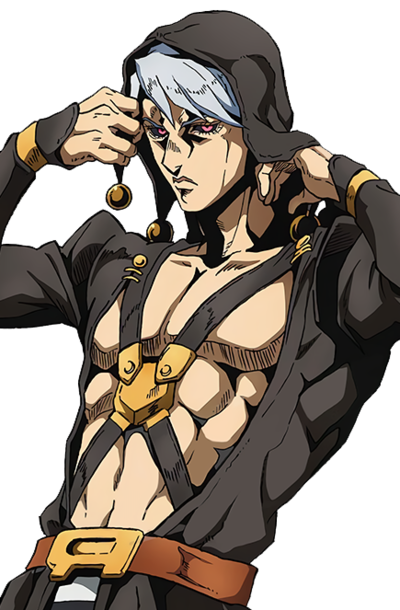 Risotto is a Stand User, and uses his magnetism-based Stand, Metallica, to battle Doppio. 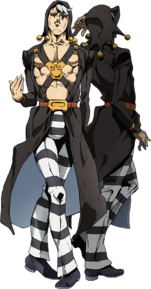 Risotto is a stoic and goal-oriented individual, befitting as the leader of La Squadra Esecuzioni. He goes through great lengths to find out the identity of The Boss, and vows to avenge the deaths of his men. Despite his failure to succeed, The Boss congratulates Risotto on his efforts and claims that his men would be proud of his acccomplishments.[4]

Risotto is the first to notice Sorbet and Gelato's absence, and stayed the longest during their funeral.[5] When his team investigates Solido Naso's old aparment, he takes a moment to lecture them about the importance of patience in their struggle against The Boss.[6]

Risotto and his men at the funeral

Risotto is a methodical and proficient killer, working under Passione with his team to eliminate any threat to its power. He is noted to have never failed an assassination in his career.[1] He avoids directly engaging with a target, opting to observe and analyze their movements before making a decisive strike. Risotto claims that in all the assassinations he's performed, nobody was ever able to approach his location.[7] Risotto Nero quickly deduces Doppio's role and abilities, nearly defeating The Boss in the process if it weren't for his eagerness.[8] He's able to read Doppio's personality change over the course of the fight,[7] his Stand powers[9] and the true identity of The Boss.[10] Even at the brink of death, Risotto attempts to murder The Boss by himself using Aerosmith.[11]

Risotto was born in Sicily in 1974. When he was 14 years old, his cousin was run over by a drunk driver. Though the driver was punished by the law, Risotto could not forgive him and, four years later, at age 18, he assassinated the driver. From then on, Risotto began living life in an underworld society. He would eventually obtain a Stand at the age of 21 and subsequently joined La Squadra Esecuzioni, a branch of the Italian mafia gang, Passione. Risotto's team would go on to assassinate politicians, American gangsters, and anyone who posed a threat to the organization.[12]

Risotto and his team would eventually become dissatisfied of their roles, as they were largely distrusted by the organization's Boss and denied territorial control like other mafia groups. Under these circumstances, two members of Risotto's team, Sorbet and Gelato, attempted to uncover the Boss's true identity and were consequently killed.[13]

At some point, Risotto's team returns from a successful mission and they banter about until Risotto points out that Sorbet and Gelato were missing. Over the next few weeks his team investigates their disappearance until Formaggio finds Gelato's corpse in an apartment having died of asphyxiation with a note Punishment left on his body.

A few days later, packages without a sender were delivered to the team. These packages were blocks of formalin that contained a frightful realization. Pesci is the first to notice Sorbet's fingers within one of the blocks. Risotto orders his men to line the frames up, and the lined up blocks reveal the pieces of Sorbet's body chopped up and preserved.

In the funeral for both, Risotto is the last one to leave. He orders his men to simply forget about Sorbet and Gelato[5]

Out of fear of the Boss's power, the team held off on pursuing any further,[14] that is until they discovered that the Boss had a lover, Donatella Una, and ultimately a child named Trish.[12] Risotto and his team then attempt to kidnap Trish to use as leverage against the Boss and exact their revenge. Just after Trish was taken in by Pericolo, La Squadra Esecuzioni ransacked Donatella and Trish's apartment in search for clues, missing a crucial picture of Donatella that was taken by the Boss himself.[15]

As they ransack Donatella and Trish's apartment, Risotto takes a moment to lecture his men about the importance of patience in their mission. As reacting to their situation hastily means certain death. He demands again, to forget all about Sorbet and Gelato.[6]

The anime adaptation also features him tracking the team. He finds Pericolo's corpse and presumably takes a photo of the ashes near him. He is later seen forcing another Passione operative, seemingly a computer expert, to analyze the ashes. The expert protests, only for Risotto to make nails appear in his hand since he only needs one hand to work. Risotto then destroys one of his eyes to shut him up. Thanks to the analysis, Ghiaccio is able to head for Venice and intercept Giorno and Mista.[16]

Upon hearing of the plane crash off the coast of said Sardinia, Risotto remembers the photo of Donatella Una taken years ago and realizes that Trish must be guiding the heroes somewhere important. Thus, Risotto Nero heads to Sardinia. On a cliffside near the house, Risotto observes Vinegar Doppio from afar before approaching and immobilizing him. Risotto notices the young man hiding an envelope and demands that he reveal it but finds it to be empty (not realizing that Doppio managed to hide the picture of Donatella beneath his shoe).[1]

Though Risotto is convinced that Doppio's fear is genuine, he notices that he reacted to the sound of Narancia Ghirga's Aerosmith patrolling the area, and deduces out that he's a Stand User. Risotto becomes restless knowing that Bucciarati, his gang, and Trish are nearby. Doppio rushes towards Risotto but razor blades suddenly spew from his mouth.[1] Risotto concludes that whatever Stand Doppio has must be a close-ranged Power-type. Risotto throws himself off a rock and uses his invisibility to disappear from sight.[17] In heat of the moment, Doppio somehow approaches Risotto's location and attempts to strike him with King Crimson's fist. Doppio misses, but Risotto's interest is piqued, as no one was ever able to approach his location before. Risotto then prepares his next strike, but notices that Doppio immediately grabs his throat as scissors form. Doppio rips out the scissors and Risotto disappears from sight again. Doppio slowly begins to understand Metallica's magnetism, by figuring out the direction of the magneism, he can figure out Risotto's location. Doppio grabs the scissors from before and throws them at Risotto, severing his foot.[18]

Despite the shock from Doppio's attack, Risotto powers through and uses his Stand to keep his foot afloat in the air. Risotto then goes on to explain Doppio's precognition, and that Doppio's personality has seemingly changed from a sniveling coward to a fighter brimming with confidence. Risotto slowly realizes the grander conclusion about Doppio's true identity. He uses Metallica to crudely staple his foot back, and turns invisible once again, stating that it's already far too late to understand his abilities. Scalpels begin to slowly form around Doppio and rapidly shootout. Doppio attempts to block them to no avail. Risotto then starts explaining that running out of iron means a slow and painful death, that Doppio will become a corpse before he has even died. Risotto takes a moment to weigh his options, as Bruno's team is nearly finished.[19] Under the pressure of time, Doppio hastily decides to grab a handful of scalpels and throw them at the apparent source of magnetism. Risotto predicted this however, revealing that the source was simply his severed foot. Risotto then begins to question Doppio's identity and realizes who he truly is under that veil. Razors form inside Doppio's head and Risotto prepares his final strike to slice it off completely. Suddenly an array of bullets rip Risotto apart, Aerosmith! The knives that were thrown earlier nearly hit Bruno's men, and due to Doppio lacking any oxygen, Risotto was the only target for Narancia's Stand.[8]

On the brink of death, Risotto mutters that he finally discovered the Boss's identity. As the Boss stands over him, he tries to get a look at his face, only for the brightness of the sun to obscure it. The Boss approaches him, and praises Risotto's cunning and will-power. He demands that Risotto return his iron, or he'll leave him barely alive for Bruno's men to finish him off. Risotto mumbles something, and the Boss reaches over to listen. Risotto repeats that he won't die alone, and grabs the Boss. He reveals that chunks of his body have covered Aerosmith, and begins his final attack. The Boss quickly erases half a second so that the bullets pass right through him, bringing a quick end to the assassin.[20]