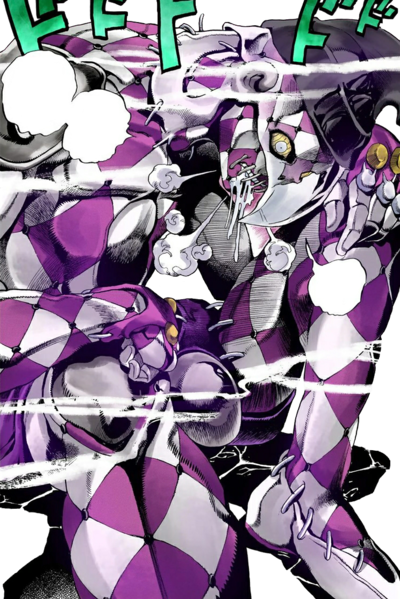 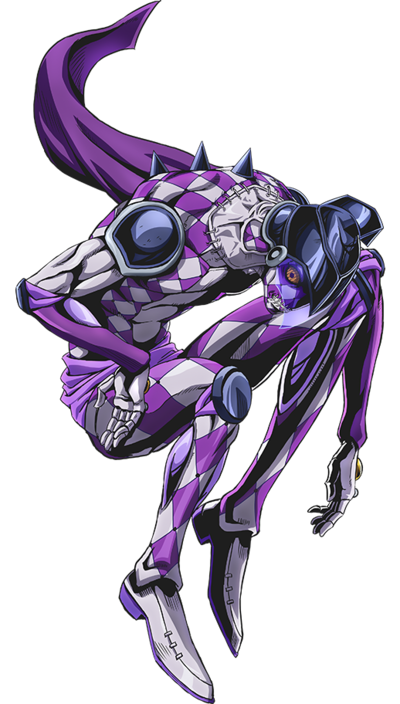 Purple Haze is a fierce humanoid Stand that stores a deadly flesh-eating virus in the capsules on its hands.

Purple Haze is a humanoid Stand with a similar height and build to Fugo's. Its face and body are patterned by horizontal lozenges of alternating shades, and it has spikes along its back. Armor pieces are present on its shoulders, elbows, and knees. The Stand's lips and appendages are loosely stitched, and its eyes have distinct irides with miotic pupils. Adorning its head is a helmet inspired by Roman design,[2] with a transparent visor in the approximate shape of a beak.

The Stand also wears a codpiece and a waistcloth with a back flap bearing a similar lozenge pattern to its body. In the anime, the back flap is replaced by a solid-color cape extending from beneath the Stand's shoulder blades.

Purple Haze is a Stand with an unstable personality. It usually behaves with unrestrained violence in its actions, and is prone to incomprehensible mumbling and roars of rage in equal measure. However, Fugo is still capable of controlling it. Despite its tendency to drool uncontrollably, it also possesses a habit of obsessively cleaning the drool off itself until it bruises its own arm. It is stated that its temper, cleanliness, viral ability, and desire to "clean" everything reflect Fugo's own personality.[1]

Because of its deadly ability and potential for indiscriminate destruction, Fugo rarely uses Purple Haze, as stated by Abbacchio.[3] However, it is undeniably a powerful close-range Stand.

The three capsules on each of Purple Haze's hands contain a particularly deadly flesh-eating virus.[1]

The virus inside of Purple Haze's capsules can decompose flesh quickly

When one of the capsules breaks, typically when Purple Haze punches something, the virus is released into the surrounding air. Those within range that are infected by the virus will have it rapidly multiply within their body and override their metabolic functions, causing them to rot from the inside. An adult human being will melt into organic goo within 30 seconds of contracting the virus.[1] Once the virus infects something, even Fugo himself is incapable of curing them. In cases where Purple Haze is unable to shatter the capsules through direct contact, it can also fire them like a pressurized gun.[4]

Because the virus indiscriminately attacks friends and foes,[1] including its own user,[5] Purple Haze's presence is extremely dangerous for both Fugo and his allies. However, the range of the virus itself is poor and can be weakened by exposure to light from any source.[1] Even in a lit room at night, it would only take about 30 seconds for the virus to be completely neutralized. Once fully exposed to sunlight, the virus becomes sterilized, which prevents it from spreading.

Despite the deadly nature of the virus, an organism with the right antibodies can survive Purple Haze. In one instance, a snake Giorno creates from a brick inside the range of the virus is able to naturally create antibodies and survive; Giorno is then able to use the same antibodies to create a vaccine and save himself from being devoured.[4] Purple Haze's ability description also notes, however, that the virus has not reached its full maturity and is still developing.