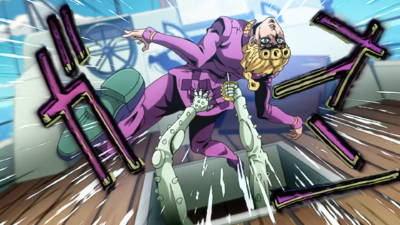 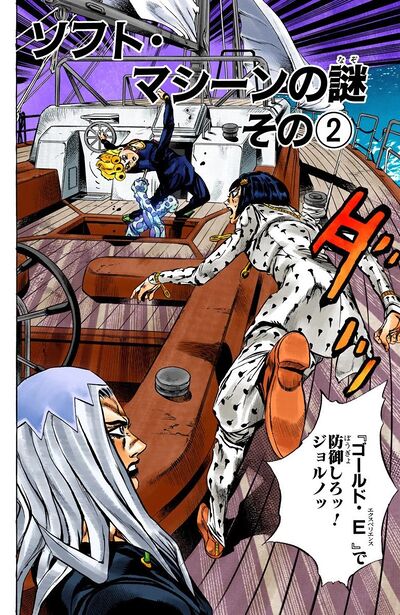 The Secret of Tender Machine

Bucciarati explains Passione's hierarchy to Giorno, elaborating that each group has a specific task to perform; each group works under an operative, who answers to the boss and his adviser. Thus, Bucciarati warns Giorno that the two of them will need power in the organization to approach the boss.

Meanwhile, in a nearby cafe, Bucciarati's group sits in a cafe. Guido Mista, Leone Abbacchio, As Pannacotta Fugo teaches Narancia Ghirga multiplication, Guido Mista begins to freak out, as only four pieces of cake remain on the table. When Narancia gets a problem wrong, Fugo stabs his pupil in the eye before slamming him into the table; Narancia retaliates by putting a knife against Fugo's throat. For his part, Leone Abbacchio is content to sit back and watch. Just then, Bucciarati enters with Giorno, a new member of the gang. Abbacchio discreetly urinates into a teapot before pouring a cup for Giorno. The gang goads Giorno into drinking it, only to watch in awe as he drinks every last drop: by turning one of his teeth into a jellyfish, Giorno was able to absorb all the urine without drinking it, impressing both Bucciarati and his subordinates.[1]

Meanwhile, two men are seen driving in a car, discussing the death of Polpo and the rumor that he has 400 million yen worth of hidden treasure. The two come to the conclusion that the only one who knows of it is Polpo's most trusted subordinate, Bruno Bucciarati.

Bucciarati's team drives a yacht toward Capri Island to recover Polpo's treasure. However, Narancia suddenly falls through the floor, leaving only his shoe.[2] When Mista and Fugo similarly disappear while searching for Narancia, the remaining three members realize that an enemy has snuck onto the yacht, undoubtedly after Polpo's treasure themselves. Bucciarati asks Abbacchio to use his Stand, but he refuses out of distrust toward Giorno; Giorno thus throws himself into the enemy's range, allowing the enemy to stab and deflate him like a balloon.[3] Somewhat impressed by Giorno's determination, Abbacchio activates his Stand, Moody Blues, which allows him and Bucciarati to replay Narancia's actions. Pausing at the moment Narancia is attacked, Abbacchio discovers that Narancia was stabbed and deflated as well.[4]