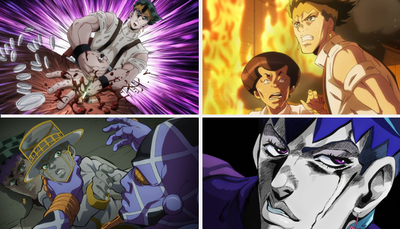 Highway Star, Part 1 (ハイウェイ・スター その1, Haiwei Sutā Sono 1)[1] is the twenty-eighth episode of Diamond is Unbreakable and the one hundred second episode of the JoJo's Bizarre Adventure anime. It covers Chapter 381 through Chapter 386 of the manga.

The game of dice between Josuke and Rohan goes awry as Mikitaka Hazekura's lack of subtlety as the dice makes the mangaka suspect that Josuke is cheating.

During a game of Cee-lo with Rohan, Josuke starts piquing the former's interest with a series of rolls that suspiciously keep ending up in the latter's favor. Convinced that Josuke is cheating, Rohan stabs his own pinky with a pen and bets 200 million yen and his own pinky that he can figure out how Josuke is cheating in the next round. Additionally, he brings over Tamami Kobayashi to use The Lock as a lie detector of sorts. Meanwhile, Mikitaka's dice disguise begins to slip, first when he vomits from motion sickness, and later when he develops a rash from the sound of nearby firetruck sirens.

When Josuke tries to hide these signs, Rohan further catches onto him and his suspicions are further proven when The Lock detects Josuke's foul play. However, the game ends up being cut short when Rohan discovers that he accidentally set his own house on fire, hence the firetrucks from earlier. Josuke takes this as an opportunity to bail out with Rohan's money, healing the latter's finger on the way out, as Mikitaka's disguise falls completely apart behind Rohan and Tamami's backs. The next day, Josuke runs into Mikitaka and his mother, who claims that his self-identification as an extraterrestrial is a joke that he frequently pulls off on his peers; however, Mikitaka asserts that he brainwashed the woman into believing that she was his mother, leaving the issue of his true nature unresolved. Meanwhile, Yoshihiro Kira, who too was baffled at the strange student's real nature, was also angered at how things have turned out and then flies off to create more Stand users and protect his son.

Meanwhile, at the Kawajiri's residence, Hayato Kawajiri returns home from school and replays the tape he secretly recorded of his parents, noting how this is the first time in a while that Shinobu bared herself to Kosaku. Looking over his recording, he notices his father acting suspicious at his desk and turns up the volume, hearing the angry ramblings of the disguised Yoshikage Kira.

Rohan witnesses a man killing a woman inside a tunnel

Some time passes after Rohan's house burns down, and he eventually meets up with Josuke on the bus. The two are visibly irritated at each other's presence, with Rohan being particularly angry at Josuke for the 700 million yen property damage the fire caused. When the bus passes through a tunnel, Rohan notices a room with what looks to be Yoshikage Kira severing a dead woman's hand inside. Josuke refuses to believe Rohan's warnings, mistaking them for a means of getting back at him for the events of their Cee-Lo game, much to the latter's fury at the former's disbelief.

Rohan is pinned down by the Stand Highway Star

Rohan decides to investigate the tunnel himself and happens upon the mysterious room, only to find it empty. However, upon leaving, he finds himself being chased by a group of disembodied feet, though they can only go up to 60 km/pH, allowing Rohan to escape on his motorcycle by going 10 km/pH faster. When Rohan is forced to slow down to avoid an oncoming truck, the feet latch onto him and start sucking away his energy; at that point, the feet form into the Stand known as Highway Star, who explains that he is feeding off of Rohan for his nutrients.

Josuke drives off with Highway Star pursuing him

Josuke decides to investigate the tunnel despite having had a falling out with Rohan on the bus; he comes across Rohan's motorcycle, which zooms out of the tunnel before falling apart. Later, Josuke sees Highway Star latched onto Rohan before the two of them disappear. Josuke chases them down to the room in the tunnel, which Highway Star uses as a trap to lure in prey. Highway Star tries to coax Rohan into asking Josuke for help as a form of live bait, but Rohan refuses, citing the feeling of power that comes from denying the requests of someone strong, and warns Josuke of Highway Star's plan. However, Josuke steps in anyways out of sheer arrogance, at which point Highway Star begins chasing him down. Hearing Rohan's warnings about Highway Star's 60 kph speed limit, Josuke uses Crazy Diamond to fix Rohan's motorcycle before driving off, with Highway Star in hot pursuit.

“
Here's a really tense episode after the dice game. I personally thought Rohan looked really cool here when he said, "I refuse (だが断る, daga kotowaru)" to his opponent's face. Visually speaking, the animators had to double up their efforts in order to emulate the manga as close as possible for this scene. This is, after all, the first Stand fight of the new cour, so the whole team had to give it their all.

Drawing all of Highway Star’s footprints by hand is fairly difficult, which is why I had to put my best recruits on the case, starting with the action scenes director. Kishō Taniyama, Yuya Fungami’s voice actor, has alot of style, which is why he ranks either first or second for most fitting voice in Part 4.

You will notice that we do not necessarily change the colors between the humorous scenes and the tense ones. This was the case in episode 27 too. Since episode 25’s visual style was admirable, it now serves as the base for the rest of the series.
”
—Naokatsu Tsuda, Blu-Ray limited edition commentaries