Car Dealer (Actually a part of a gang)[2]

Eyes of Heaven
This character is commonly or otherwise referred to as "Sports Max".
“
Listen... I'm gonna go ahead and suck your brains out, right now... And even if I rip out all the shit in your stomach and fill your empty skull with it, I won't be satisfied!!
”
—Sports Maxx to Ermes

He wears a long, light coat and light pants, both patterned by a dark paisley design

The series is known for alternating colors between media, the information presented below may or may not be canon.
Skin(Fair, violet lipstick)
Hair(Blond)
Eyes(Blue)
Outfit
(Violet shirt and pants with black paisley pattern, second blue shirt, orange GD st Jail text on the back)

Sports Maxx has displayed the behavior of a violent gang member prior to entering Green Dolphin Street Prison. When Foo Fighters mentions Ermes's story, she says that Sports Maxx killed someone by making the victim put a wooden stick in their mouth before violently stomping on them.[3] He then had Gloria Costello killed for denouncing him to the police.[4] Maxx a no guilt at all for what he did, blaming Gloria for sticking her nose in his "business" instead of admitting any wrong.[5]

When he's turned into a revenant, Sports Maxx's violence only worsen as he begins to crave brains to eat,[6] feeling it as an unknown thirst at first.[7] During his fight against Ermes, he's abnormally violent and does things typical of a zombie like trying to bite into Ermes' skull. Due to a mix of anger and his inherent brutality, Maxx also threatens to suck Ermes' brains out and fill her head with feces just to spite her.[8]

Sports Maxx maintains a respectable façade. He still takes drugs[9] and goes to the prison's prostitutes for pleasure[10] but also performs other, more respectable activities even if they're often related to death. His hobby seems to be taxidermy and he stuffs animals like birds or alligators[10], but he also cleans the graveyard and gives flowers to some of the graves.[11] He also visits the chapel regularly, but it is revealed that it is because he cooperates with Whitesnake, with whom he acts more subservient and reasonable.[12]

Maxx originally could only control the reanimated corpses of people and animals around him. However, after dying himself, his Stand preserved his body and spirit by allowing himself to exist as an undead zombie. This allowed Maxx to dismember his body without pain or injury while also giving him superhuman strength. 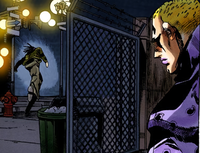 Maxx accustoms himself to the life in prison and builds his own schedule. He then meets Enrico Pucci and acquaints himself with Whitesnake, agreeing to helping him. At an unknown time frame, he is given the Stand Limp Bizkit by Pucci, who notices his potential for evil. When Whitesnake hands him a human bone, Maxx worriedly activates its power on the bone. The bone suddenly tears through Whitesnake's hand and vanishes, but Maxx feels it moving around near the maximum security ward. 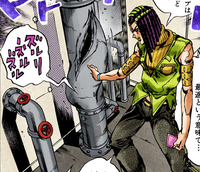 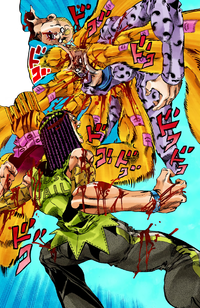