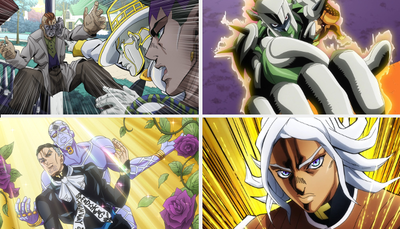 July 15th (Thursday), Part 2 (7月15日(木) その2, Shigatsu Jū-go-nichi (Moku) Sono 2)[1] is the thirty-second episode of Diamond is Unbreakable and the one hundred sixth episode of the JoJo's Bizarre Adventure anime. It covers Chapter 401 through Chapter 406, Chapter 412 and half of Chapter 413.

The battle against Toyohiro Kanedaichi continues for Josuke. At the same time, Rohan receives the visit of the architect Masazo Kinoto who has come to appraise the damage done to his house and has a strange obsession with keeping him back out of sight.

Toyohiro is defeated by Josuke

With Mikitaka pinned to Super Fly, Josuke decides to rush in and confront Toyohiro, against Mikitaka's wishes. Josuke and Toyohiro square off, with Toyohiro having the upper hand due to him being better-adapted for life on an electrical pylon. During their fight, Toyohiro peels off his face, revealing that he actually wears a multitude of latex masks to conceal his identity. Toyohiro fires multiple reflected cuts at Josuke, only for him to be defeated when Crazy Diamond is able to use its reparation ability to direct the attacks back to their original locations. Defeated, Toyohiro reveals that he actually lives on the pylon due to his aversion to society and only sided with Yoshihiro because he was promised help with assimilating into Morioh. Toyohiro also reveals that Yoshihiro mentioned the fact that Koichi has already been defeated by another enemy Stand user, at which point Josuke and Okuyasu rush off to look for him. Toyohiro, meanwhile, continues life on the pylon with Mikitaka, having become a living landmark due to his unusual lifestyle.

Kinoto suspiciously hides his back from Rohan

Meanwhile, Rohan meets Masazo Kinoto, who has come over to plan out the reparations to his house. Sensing something strange about Kinoto, Rohan uses Heaven's Door to read his memories and learns that Kinoto has a fear of people seeing his back. As a precautionary measure, Rohan writes "cannot attack Rohan Kishibe" into Kinoto before returning him to consciousness. As their meeting progresses, Rohan becomes increasingly perplexed at Kinoto's constant hiding of his back, and develops a desire to see the man's back out of sheer curiosity.

Terunosuke Miyamoto reveals himself to Josuke

With Koichi nowhere to be found, Josuke enlists the help of Yuya Fungami and his abnormally-sensitive nose. Despite having exacerbated Yuya's injuries during their last confrontation, Josuke earns the latter's trust by healing him with Crazy Diamond, at which point Josuke and Yuya head off to look for Koichi. During their search, Yuya realizes that they are being followed by Terunosuke Miyamoto, who reeks of Koichi's scent. Knowing this, Josuke chases Terunosuke down, only for an unconscious Tomoko to appear in his place, catching Josuke off-guard. Terunosuke then contemplates how his Stand, Enigma, is able to turn people into autostereograms if he can catch them displaying tics they show when afraid, and that he was able to easily capture Tomoko and Koichi through this method. By releasing Tomoko, he is able to detect that Josuke bites his lower lip when afraid, but is unable to catch him in the act. Thus, Terunosuke releases a folded sheet of paper for Josuke to pick up. Josuke takes the bait and begins to open it, while Yuya warns him of the danger that it holds.

“
Eri Nagata was in charge of the directing for this part and despite the complexity of the tower itself, she did an excellent job. I love how the tower is visually represented and the fight's overall direction.

The Enigma fight consists of targets being turned into paper and imprisoned. Once again, Mr. Soejima was responsible for the storyboard and the directing, giving us a result worthy of JoJo.

Fungami also returns in this part. Looking back at his face, he really is a handsome guy. I too would like to brag about girls following me everywhere like him! Am I the only one..? Nah, that’s a typical reaction. (laugh). But at the same time, he also really loves his girls, which is part of his charm.
”
—Naokatsu Tsuda, Blu-Ray limited edition commentaries