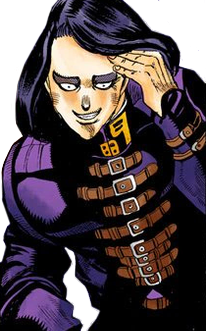 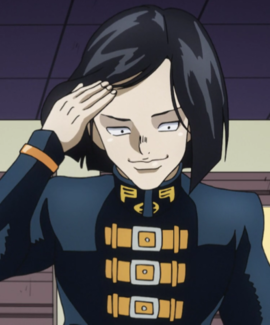 All Star Battle
“
I finally got this so-called 'Stand' ability...not everyone gets to have one, you know? Kinda makes you want to live a more dangerous and successful life than the average guy, don't you think?
”
—Toshikazu Hazamada, Chapter 291 - Toshikazu Hazamada (Surface), Part 3

Toshikazu Hazamada (間田 敏和, Hazamada Toshikazu) is a minor character featured in the 4th part of JoJo's Bizarre Adventure, Diamond is Unbreakable. He is introduced as an antagonist in the "Toshikazu Hazamada (Surface) story and in a supporting role in "Let's Go to the Manga Artist's House" arc.

After being beaten up, Hazamada stops abusing his powers and tries to be nicer with Koichi. He reveals that he's a great fan of Rohan Kishibe and tries to visit his house together with Koichi. While Rohan develops some respect for Koichi, the mangaka judges that Hazamada is so despicable that no one would want to read a story about such a character and thus doesn't use him as material.[2] The presence of tennis gear in his school locker suggests that he practices tennis.

At the end of the series, Hazamada comes to say goodbye to Reimi Sugimoto.