A summary of Guido Mista's history and movesets in video games. 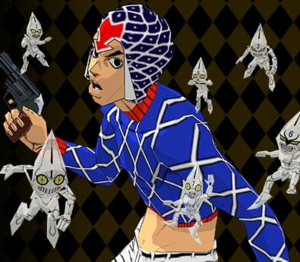 File:Giogio04.png
Mista makes his video game debut as a playable character in GioGio's Bizarre Adventure. He is voiced by Kentaro Ito.

Mista is a unique character in the game, as he cannot use punches or pummeling attacks, save for a melee attack if he gets close to the enemy. His main method of attack is firing bullets from his gun, like in the manga. The cylinder of Mista's revolver appears at the bottom right of the screen, displaying how many bullets he has remaining: if Mista runs out of bullets, he must reload before he is able to shoot again. If at any time during a battle, Mista ends an attack with 4 bullets remaining, a unique line of dialogue depicting his agitation will play.

The heads of Mista's Sex Pistols are shown next to the revolver display: if Mista uses a special attack, a normal attack in Stand Mode, or a Stand Shoot, one of the Sex Pistols will ride the bullet. After the shot hits something, the Pistol will begin slowly returning to Mista. While Stand Mode is active, Mista's normal attack uses up one Sex Pistol in order to home in on the enemy. Charging a Stand Shoot loads more of Mista's available Pistols onto the bullet; if a Stand Shoot is used in Stand Mode, the Pistols linger around the enemy to deal additional damage with Mista's next shot.

Gonna light you up!
Yee-haw!

Go, Pistols!
We've got him off-guard!

Mista makes his comeback in the PS3 title as a playable character and was confirmed for the game alongside Giorno, Kakyoin, and Polnareff.

Mista's entire moveset is based on his previous game appearance, as he uses Sex Pistols to deliver powerful shots and ricochet bullets at the opponent. Despite being one of the mass majority of playable characters in the game with the "Stand" Style, Mista cannot switch between movesets, nor does he have access to the Stand Rush ability. He shares this effect with Hol Horse and Diavolo. Instead, Mista's Style button triggers abilities that involve Sex Pistols, powering up the strength of his shots. Exclusive to Mista are a Pistols Icon and Ammunition Icon, appearing above his Heart Heat Gauge. The Pistols Icon displays how many and which of Sex Pistols are readily available for use, and the Ammunition Icon displays the number of bullets loaded in Mista's cylinder. Mista has 950 HP.

Style/Specials/Etc
Time to get to work!

ON GROUND IN AIR OK
One up to all six of the Sex Pistols enter Mista's gun, increasing the damage of the next shot fired by "Gonna light you up!" by ricocheting the bullet through the opponent multiple times when it hits. Mista's next bullet is shown flashing red in the Ammunition Icon when this move is used. This skill can be used while Mista is moving, in mid-air, or even in the middle of attacking, but cannot be used if "Places, everyone!" is in effect.
Places, everyone!

ON GROUND IN AIR OK
Mista deploys one up to all six of the Sex Pistols in the air, keeping them hovering in place. Mista may place one up to three at a time, depending on button input. This move can also be used while in mid-air, but cannot be used if "Time to get to work!" is in effect, and has a follow-up.
Smash!

ON GROUND
Mista forcefully kicks the opponent's leg. A low attack that cannot be blocked if the opponent is not crouching. A command normal that can chain into Mista's skills.
Get back here!

ON GROUND IN AIR OK
Mista recalls any of the Sex Pistols to him that are in use with "Time to get to work!" or "Places, everyone!".
Unlucky Number 4
Passive
Any time Mista is attacked when his Ammunition Icon shows four bullets, he loses an amount of his Heart Heat Gauge proportionate to the damage taken as a panel of his face visibly panicking appears. This effect will continue until his bullet count changes.
Special Moves
Gonna light you up!

ON GROUND IN AIR OK
Mista fires his gun normally, with the attack button inputted determining the direction of his aim. If used in the air, this skill suspends Mista's fall and alters his possible firing angles.

He may fire more shots at once with subsequent button presses, even firing at the other possible angles with the alternate attack buttons. Assuming all six bullets land, the sixth shot will knock the opponent down. (Comboable through Puttsun Cancel)

Pass, pass, pass!
(After "Places everyone!")

ON GROUND IN AIR OK
Mista fires a bullet towards one of the Sex Pistols, and they ricochet the bullet around until all deployed members have hit it, before it is directed at the opponent. This delays the landing of the shot, potentially hits the opponent at unexpected angles, and deals much more damage than a shot fired via "Gonna light you up!". The damage does not increase past the first Pistol, however, making passing the bullet along additional Pistols serve only to further delay the timing at which the bullet is sent the opponent's way for the purpose of combo utility or setting up an automatic combo-break if the opponent attacks Mista while he's firing. This move can be also be used while in mid-air as well, suspending Mista's fall. Mista may fire more shots at once with subsequent button presses; assuming all six bullets land, the sixth shot will knock the opponent down. Different inputs determine which of any deployed Pistols that Mista will fire at first, and the order they will pass the bullet(s) amongst each other if multiple are available. Any Pistol that has redirected a bullet will return to Mista once he stops firing. (Comboable through Puttsun Cancel)
Reload
(When out of ammo)

ON GROUND
If out of ammunition, either of Mista's special moves that would fire bullets will instead cause him reload his revolver, quickly inserting each bullet one-by-one.
Quick Reload

(requires 1/2 a stock of HH) ON GROUND
Consuming half a bar of the Heart Heat Gauge, Mista can reload near-instantly by dropping the ammunition from his hat directly into the cylinder, reloading the bullets all at once. This skill can be used whether or not he's actually out of ammo.
I'll ask the damn questions!

ON GROUND
Mista leaps forward in a flying knee-butt attack, knocking the opponent off their feet. This is Mista's only melee skill. If Light or Medium is inputted, this move can activate Rush Mode. If Heavy is inputted, the move has noticeably longer start-up time but becomes a middle attack that cannot be blocked crouching. (Comboable through Puttsun Cancel)
Throw
Devastating Knee Kick
2 ATK buttons at close range or

ON GROUND
Mista grabs and holds the opponent as he knees them in the torso, before kicking them away.
Heart Heat Attack / Great Heat Attack
Aim! Aim, you idiots!

+ 2 ATK Buttons ON GROUND
Mista shoots a singular bullet, which is followed and broken into seven pieces by all six of the Sex Pistols kicking it at once. The pieces are launched at the opponent (similar to his attack on Sale) in a fanning formation, dealing more damage the closer the opponent is. Stand Users can potentially take double damage if they are counter-hit with their Stand active, but the Stand must be hit first, then the User in quick succession in order for this to occur. The HHA also reloads Mista's ammunition.
My true resolve starts here!

ON GROUND
Mista fires off his entire cylinder as Sex Pistols carry each bullet toward the opponent with homing capabilities. If any one of them hits, Mista will take the opportunity to Quick Reload and unleash another whole cylinder, each bullet being redirected and ricocheted by Sex Pistols multiple times as they hit the opponent from different angles. The attack finishes with the final bullet being kicked by all six Sex Pistols at once through the opponent's forehead at an incredible speed. This GHA has the added effect of reloading Mista's ammunition.

Alongside the rest of Team Bucciarati (sans Narancia) and Ermes Costello, Mista is one of the only characters who activate Resolve Mode instead of the normal Rumble Mode when low on health. In this state, attacks that do not result in hard knockdowns or blow-backs no longer phase the character.

If Mista is fighting against Polnareff, they will have special dialogue, where Mista asks if the young Polnareff is the same wheelchair-bound man who becomes a turtle, while Polnareff merely wonders aloud if Sex Pistols is similar to Hol Horse's Emperor. Mista also has special dialogue with Hol Horse himself, wherein Hol Horse decides to see which one of the two is the faster gunman, a challenge that Mista accepts. If Mista wins, he'll note how funny of a guy Hol Horse is. If Hol Horse wins, he'll note that, unlike Mista, his bullets are also part of his Stand.

Mista was confirmed for the game alongside Giorno, Fugo, and Narancia. Since most character animations & GHA's are reused from All-Star Battle, he retains most of the same attack patterns as previously. However, as a result of the transition into full 3D arena combat in Eyes of Heaven, Mista is able to use the environment more freely to his advantage, utilizing his Stand's capacity for bullet control to a much more advanced degree than what was possible within the 2.5D combat system of ASB.

As a Stand User, Mista is one of many characters with wildly varied abilities that grant him uniqueness in battle. Mista does not have Normal Attack combos. Instead, his Normal Attacks have him fire his bullets at targets. Similar to All-Star Battle, Mista has an Ammo Icon above his health gauge, displaying his current bullet count out of 6. If he is out of ammo, the icon will have the word "RELOAD" flashing over it, and any attack or skill that would cause him to fire bullets instead causes him to Load his revolver, inserting each bullet individually.

Mista is given an alternate costume. The costume is based on the flashback from his teenage days before joining Passione, wearing a more casual outfit consisting of a beanie, a T-shirt with an open button-up shirt over it, and saggy jeans.

He is paired with Giorno in the Eyes of Heaven Tournament, defeating Rohan Kishibe and Polnareff in the first round, and "Kosaku Kawajiri" and Weather Report in the second. In the semifinals, they are defeated by Bucciarati and Trish in the first round. 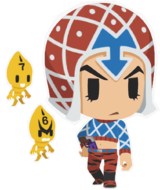 Outside: Trish; Inside: Mista ver.
Rarity: 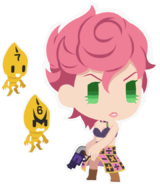 Skill: My Spiritual Energy is on Point! 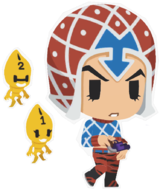 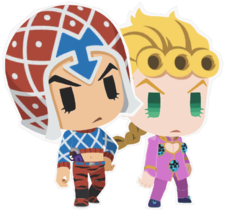 Skill: We don't know unless we try!

Mista was one of the characters first confirmed during the game's announcement. 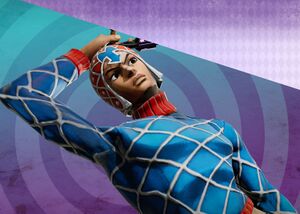 File:Guido Mista (JJBATA Last Survivor).jpg
Guido Mista
Skill Name
Button
Description
Release Level
Shooting
R2 (Repeat)
Fires gun. Massive damage from headshots.
-
Rodeo Shot
R1
Remotely control the bullet and damage by flying into the target. Massive damage from headshots.
Level 2
Ready
L2 (Hold)
Take aim to increase the accuracy of the bullets.
-
Pistols Strike
L1
Remotely control the bullets on which all the Pistols are riding. At the point of impact, everyone kicks the bullet and deals range damage. Can be used up to 2 times per game.
Level 4
Character Difficulty: ★ ★ ★
Type: Shooter