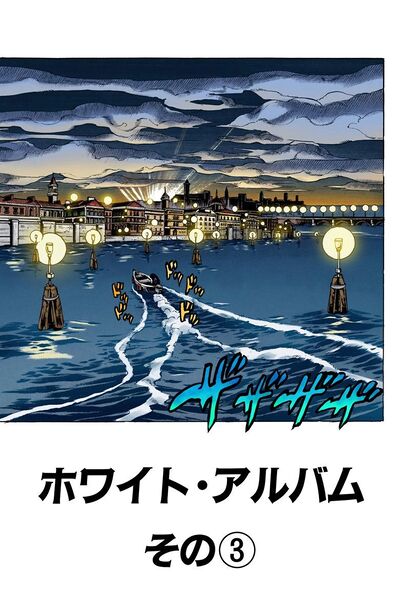 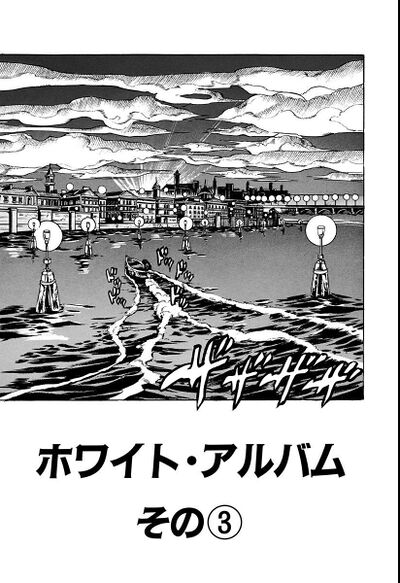 White Album, Part 3 (ホワイト・アルバム その③, Howaito Arubamu Sono 3), originally What is Real "Victory"?! (本当の『勝利』とは!?, Hontō no "Shōri" to wa!?) in the WSJ release, is the seventy-second chapter of Vento Aureo and the five hundred eleventh chapter of the JoJo's Bizarre Adventure manga.

Bucciarati's group approach Venice by boat, Narancia's Aerosmith acting as a watch. Meanwhile, Giorno is trapped in the car, surrounded by ice, causing his hand to start breaking. He urges Mista, who is still free, to abandon him and get the disk, hoping that the large quantity of water will slow down the ice formation.

Ghiaccio demonstrates the power of White Album by freezing the water, creating a layer of ice up to the border of the river at an incredible speed. Mista then asks Giorno to transform the car engine which is still hot, into vegetals, and makes a frozen board out of the vegetals, sliding toward the train station. Ghiaccio is forced to reverse his freezing, liberating Giorno and plunging Mista into the water.