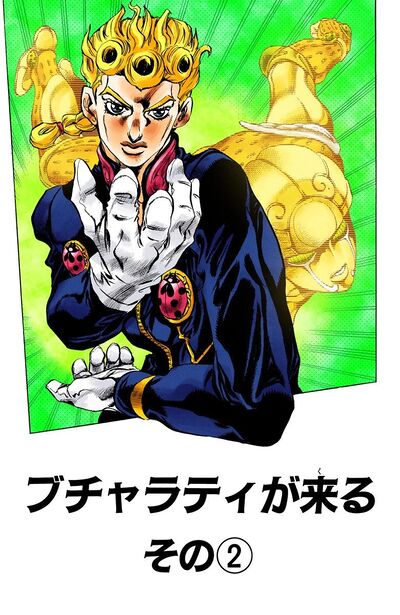 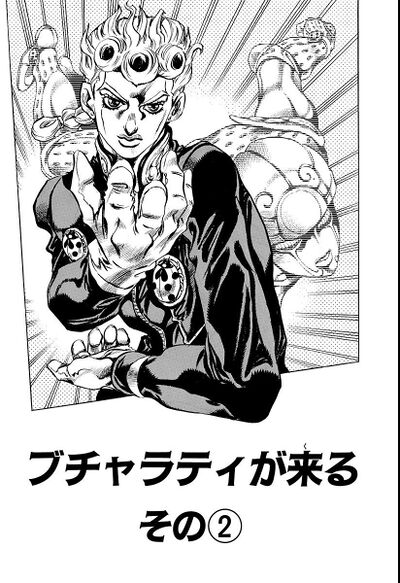 Bucciarati Is Coming, Part 2 (ブチャラティが来る その②, Bucharati ga Kuru Sono 2), originally Is There No Choice?! (やるしかない!?, Yaru Shikanai!?) in the WSJ release, is the fifth chapter of Vento Aureo and the four hundred forty-fourth chapter of the JoJo's Bizarre Adventure manga.

As DIO believed women served no other purpose but to feed him, no one knows why DIO let Giorno's mother live. While beautiful, she was a terrible mother, constantly leaving her baby alone in the middle of the night. His stepfather was even worse, constantly beating him over trivial things, such as how he observed others, which was, ironically, a behavior Giorno developed because of being abused so much.

One day, while on his way home, Giorno stumbled upon a heavily wounded man lying in the grass, hiding behind a wall. Four men then approached the young boy, asking him where this man went. Without fear, Giorno lies to them, saving the man. Two months later, this man, now revealed to be a gangster, approaches Giorno, thanking him. After this, Giorno's stepfather stopped abusing him, and everyone in the town started treating Giorno like royalty. Through the trust he learned from this man, Giorno realized his reason for existing, his destiny, his dream; to become a "GANG-STAR!"

After further interrogation, the man in the trolley reveals himself to be Bruno Bucciarati, a member of the same gang as Luca. Giorno then coughs up Luca's fingers, unable to figure out how Bucciarati is doing this. At that moment, a zipper appears across Giorno's cheek. Giorno realizes that he is dealing with a Stand user.